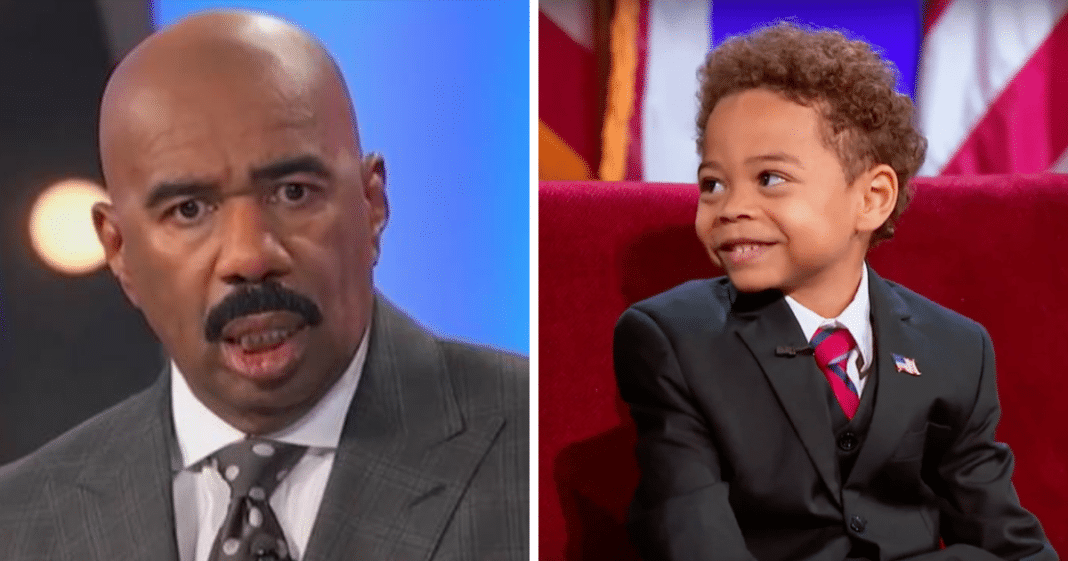 Meet a probable future American leader: Zachary Tzegaegbe. At just six years old, Zachary, from Lilburn, Georgia, is a presidential expert that would put most Jeopardy! Gameshow contestants to shame. His fascinations with presidents started at age three, and he knows them all in order, as well as an impressive array of facts about them.

So why does this child prodigy have a fascination with presidents?

“They’re so nice, and they do good,” Tzegaegbe explained.

Not only does Tzegaegbe know facts like the first president to have electricity in the White House (Benjamin Harrison in 1891), he also studies and memorized presidential speeches. He learns by watching YouTube and looking at books.

Tzegaegbe appeared with Steve Harvey on the hit NBC show, “Little Big Shots,” where Harvey quizzed the six-year-old about his impressive range of knowledge. While the idea of appearing on television would make most people anxious, Tzegaegbe said he wasn’t nervous at all. Like a seasoned actor, the boy shined reciting a speech from his favorite president, John F. Kennedy. He even takes on a bit of the Kennedy accent and hand gestures.

Why is JFK his favorite president?

“He saved people, and he was brave, and he won a Purple Heart,” Tzegaegbe said.

Oh, but Tzegaegbe has lots of other favorites as well.

“My second one is Obama because he gave really good speeches.”

Tzegaegbe has a bipartisan appreciation of past presidents.

“My third one is George W. Bush because he smiles a lot.”

“My fifth one is Abraham Lincoln because he freed all the slaves,” he said.

Steve Harvey asked Tzegaegbe what law he would make if he became president one day.

“I would make that all Men are created equal,” he said.

“I think everybody out here would probably vote for you if you ran for president,” said Harvey to applause.

Tzegaegbe’s mother, Peggy Davis, is the principal at an Elementary school in Decatur. She started showing her son pictures of the 45 presidents on an iPad when he was three. Then he wanted to know more, watching videos on YouTube. To her amazement, he began quoting the presidents like Franklin D. Roosevelt. Since then, Davis has encouraged his interest by taking him to presidential museums. Once he even got to meet President Jimmy Carter.

“He knows more about presidents now than I do,” she marveled.

Fortunately for all of us, Tzegaegbe is intrigued by the idea of becoming a president himself one day, so that he can “help people.” However, the interest in running for president declined a bit after he learned about the history of assignations. Instead, he may choose to run for mayor. He also wants to learn about engineers and the Secret Service.

We are certain that whatever this kid puts his mind to, he will accomplish. Our future will be brighter thanks to kids like Zachary Tzegaegbe.

Watch this impressive six-year-old appear on Little Big Shots below: