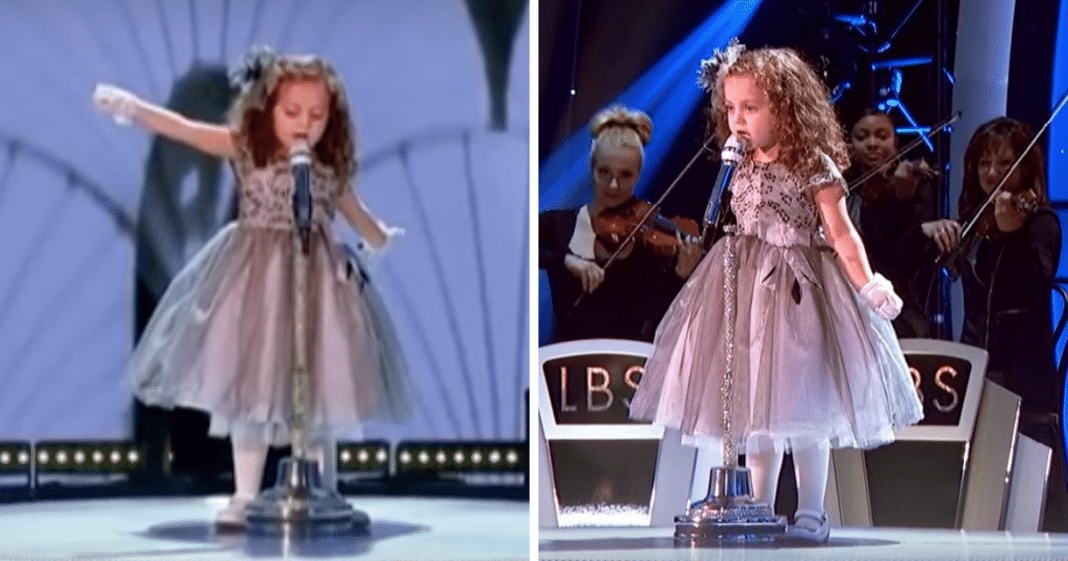 At four years old, Sophie Fatu started her singing career. Her mother posted videos on YouTube as she sang Frank Sinatra songs. The videos went viral, attracting fans from all over the world. Soon she was invited to perform on “Little Big Shots” with Steven Harvey, where she delighted the audience with her interview and performance of Sinatra’s “My Way.”

Harvey asked Fatu why she liked the song.

“Because it’s about me,” she explained.

“Do you always do it your way?” asked Harvey.

Fatu nodded and said, “Yes,” as the crowd laughed.

When asked why she likes Sinatra so much, she explained:

“He’s so classy and handsome and I’ve been wishing to sing his songs,” she said.

Her mother, Victoria Fatu, is an international concert pianist and singer from Russia who was a professor of Piano at West Virginia State University. She taught Sophie and her two other children to appreciate music. One day at their home in Charleston, West Virginia, she took a video as her daughter passionately sang, “My Way” by Sinatra and she posted it online. Now the rest is history as her child is becoming a superstar.

“She still listens to Sinatra on her iPad before she goes to bed,” Victoria said.

“But otherwise, she’s just a regular kid. We’re not doing anything toward her artistry.”

While almost anyone would be nervous to appear before the world on television, this five-year-old was unphased.

“I wasn’t scared one bit,” she told Ellen.

The precocious and talented child star’s next big appearance was on “America’s Got Talent,” where she once again wowed the audience. She was the youngest contestant to ever appear on the show.

Sophie also seems to have created a big impression on the show’s creator and talent competition judge, Simon Cowell and his four-year-old son, Eric. Cowell was impressed she had managed to remember all the words and sing along in tune when the key changed.

When Sophie appeared on stage to perform, Simon said:

Eric responded by shaking his head no.

“He’s shy,” said Simon. “Sophie, What would you do with one million dollars?”

“I don’t really care about money. I just want to sing for everyone and make them happy,” she said.

See her performance below:

Watching Sophie Fatu, you might be reminded of a child star going back to the 30s and 40s, Shirley Temple. Both performers could sing, dance, and act by the age of five, although Temple got her acting start a little earlier at the age of three.

The wait is almost over! Sophie’s cover of Frank Sinatra ‘s #TheLadyIsATramp is coming out TOMORROW on YouTube, so make sure you have your notifications on and never miss a new video ❤️❤️❤️Thank you Little Mademoiselle And Kid's Dream For providing incredible dresses for this video! #SophieFatu #franksinatra

Today, Sophie Fatu has her own YouTube channel created by her mother. They have moved from West Virginia to Los Angeles, where Sophie will be recording in the studio with Phillip Griffin.

“He’s done a lot of composing for movies,” Victoria said. “We’re all very excited about this — the move, the show, the recording. It’s all so overwhelming.”

Even though Sophie is on a fast-track to stardom, her mother says she is still the same little girl at home.

“She drives me crazy.”

Below is a behind-the-scenes look at Sophie before she went to appear on Little Big Shots:

See Sophie’s ridiculously cute appearance on the Ellen Show below: