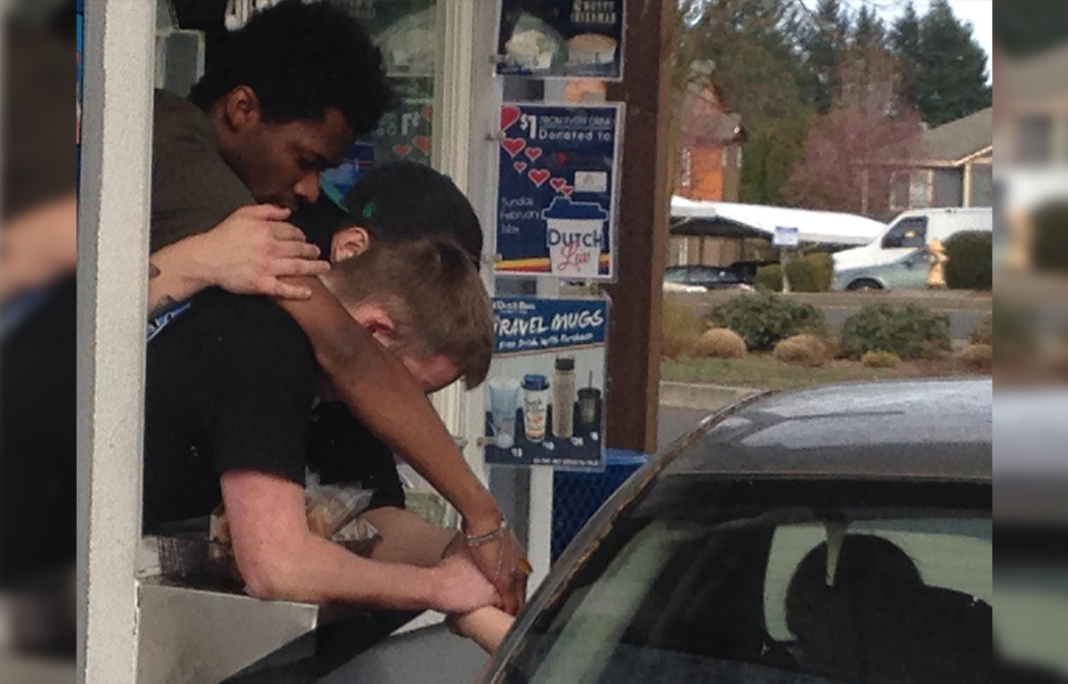 Each day, millions of Americans start their hectic daily lives with a boost of coffee, a jumpstart to get us off on the right foot. As we wait in line at the drive-through of our favorite coffee stand, we may not consider what’s happening in the car next to us. However sometimes, the person just feet away needs more than just a beverage. They can be quietly facing tragedy and heartache in their lives and could use an act of kindness to get them through their day.

Barbara Danner was in line at “Dutch Brothers” coffee stand in Vancouver, Washington. The line wasn’t moving. She looked at the car in front of her and saw the woman in the car talking to three of the baristas in the window. Was there a problem with the order? Why was it taking so long?

Then something amazing happened. All three of the young men piled one on top of the other and started reaching down into the car, locking hands with the woman inside. Now, this was truly something out of the ordinary. Danner snapped a picture of what happened.

When she was able to make it to the window herself, she asked the men what happened and got a remarkable answer. The baristas recognized the young woman from previous trips through the line and had noticed that she was crying and in pain.

Danner shared the story and picture to Dutch Brother’s Facebook page, where it went viral and has now reached 139K shares, 448K likes, and 20K comments.

“Turns out the young lady in line ahead of us lost her 37-year-old husband last night. When the DB guys & gals noticed she was falling apart, they stopped everything and prayed with her for several minutes, invited her to come back for prayer and support, as well as anything else that she might need.”

“Prayers for the young family, and you know where to stop for coffee!” 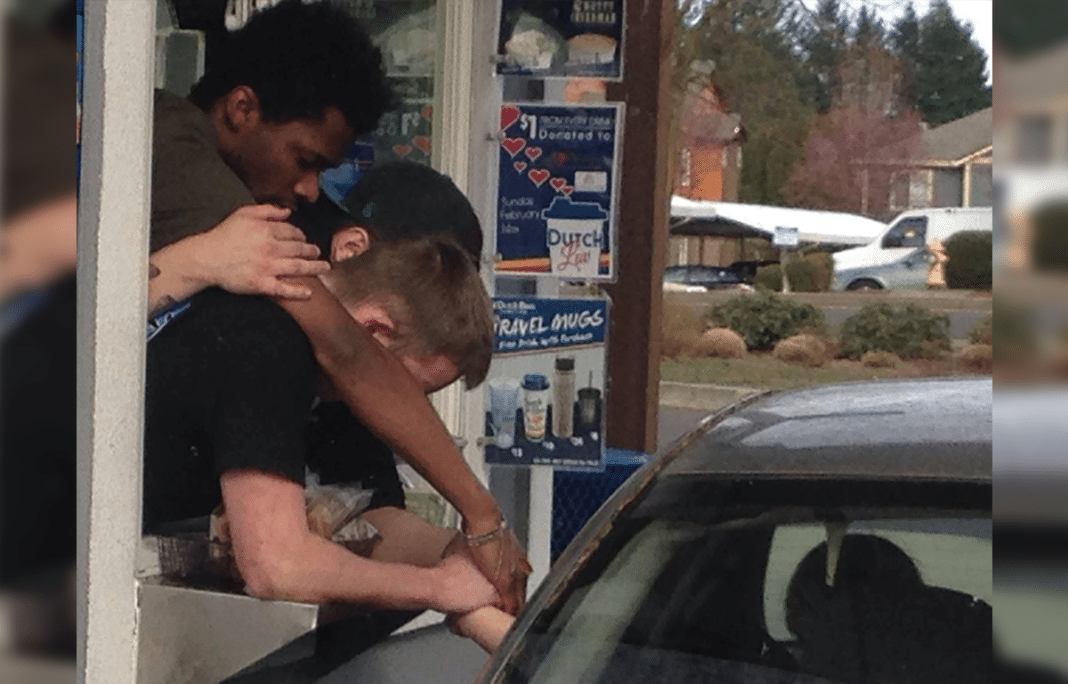 According to WTHR13, one of the young men in the window decided he and his coworkers needed to reach out to a grieving widow with empathy and compassion.

“She was showing raw emotion towards us so we gave it right back to her,” said barista, Pierce Dunn.

It wasn’t the first time the employees had delivered more than just a cup of coffee to their customers who were having a bad day. Rather than just the typical, “Hi, how are you today?” these guys went out of their way to genuinely let customers know they cared.

“She was having a really bad day. Her husband passed. When she said that I was like, ‘There’s nothing more you need to say. We got this,'” said barista, Evan Freeman.

“We’re going to do what we do every time we get someone who is in pain or hurt. We’re going to give them our love,” said Freeman. 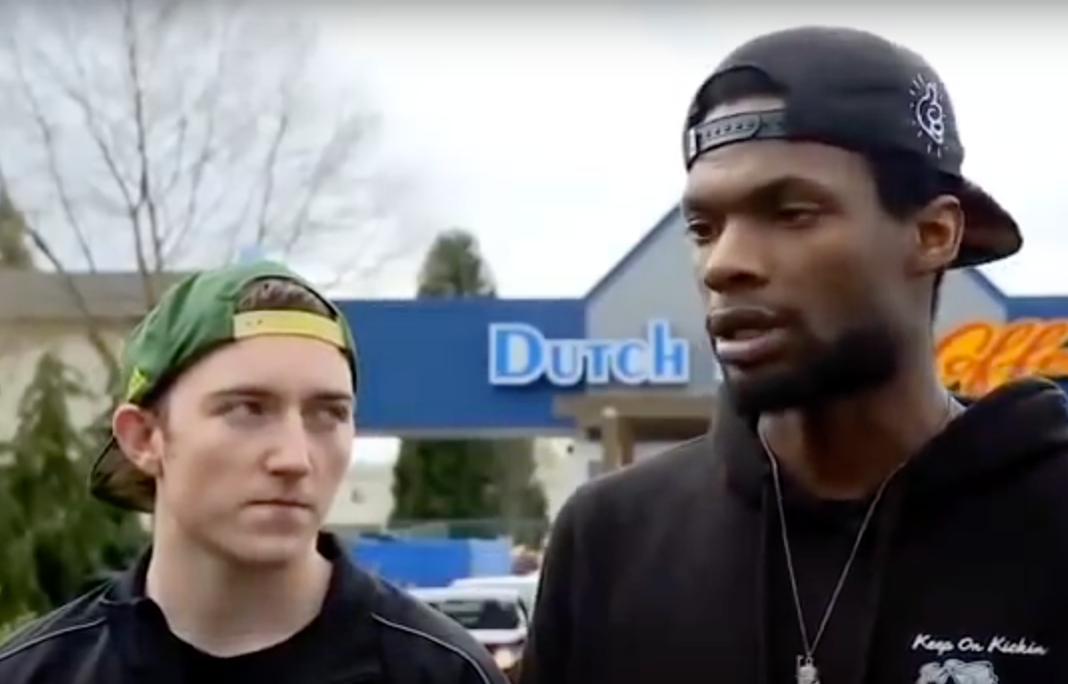 The three gents offered the woman a free drink and then they came together to literally reach out to her. The young men joined hands with the grieving widow and said a prayer for her and her family.

“You know I really want her to have peace over the situation,” said Dunn.

They didn’t know that Danner was quietly capturing it all on her camera.

Even the coffee shop’s owner, Jessica Chudek, was surprised to learn what her employees had done that day. She was scrolling through Facebook and was touched by the story, not realizing the story was about her own franchise at first. Then she was overcome with pride and radiated a huge smile.

“I just thought, ‘Oh, that’s great. I love that our company does that when you show love out the window that way,” said Chudek.

“Then I started studying it a little more and I said, ‘Wait! That’s Evan and Pierce! That’s my stand. Those are my kids! It just brought me to tears right then,’ she continued. 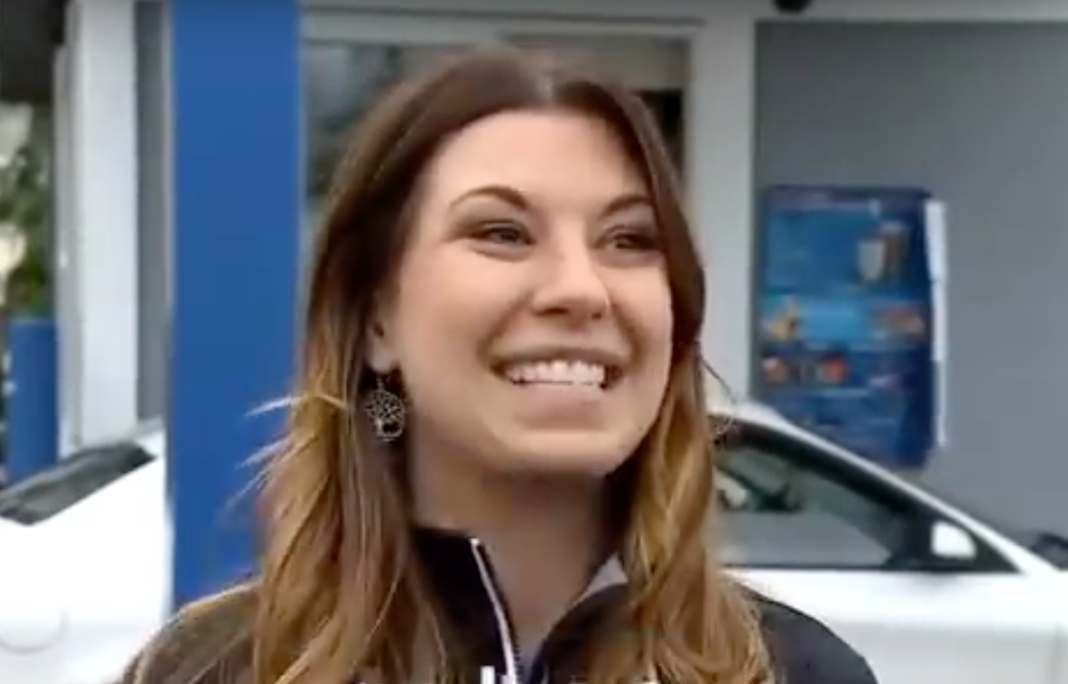 In an interview with the local news, Dunn and friends said it was just another average day at work. They made showing compassion a regular part of every day, and they hoped that the story might inspire others to do the same.

“If every single person did an act of kindness or just had a smile on their face every single day, the world would be a completely different place,” said Dunn.