Snowmobilers Rescue Moose Buried Neck-Deep In Snow, But What It Does Next Leaves Them In Awe 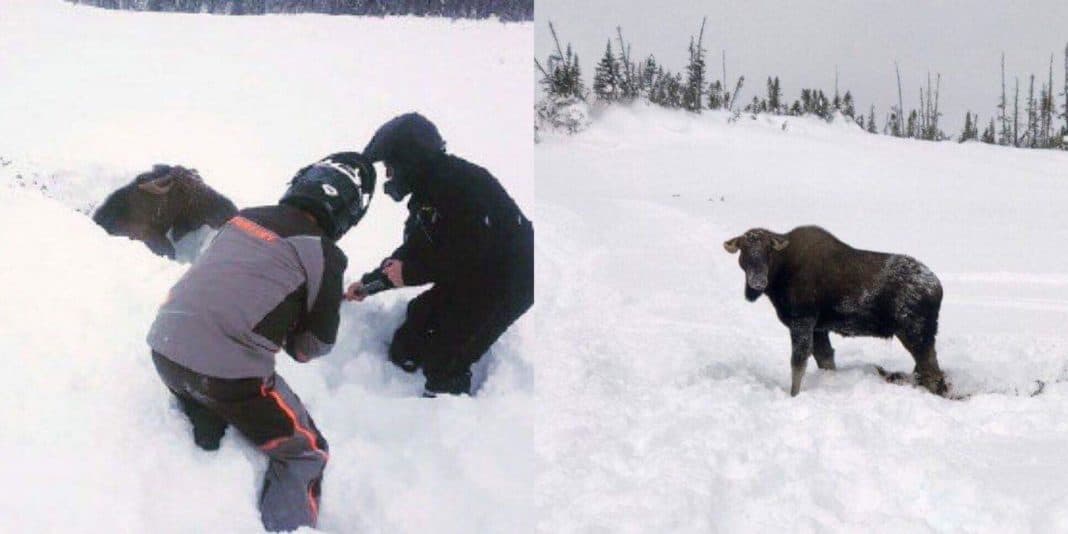 Snowmobiling is loads of fun. With all the white stuff around, especially in Deer Lake, Newfoundland, the conditions are perfect for hitting the road. Jonathan Anstey owns a snowmobile riding clinic in the western part of the province. He and a group of seven friends decided to hit the trails last weekend.

It was the first time in two weeks the area received a thick new coating of snow. The group of riders headed off the main path and spotted a moose buried neck-deep in the white stuff. Astey estimates the animal was covered by six-feet or 1.8 meters of the chilly snow fall.

“We knew the moose was stuck good,” he said in an interview on Wednesday. “He tried several times to get himself out of the hole, but he wasn’t getting anywhere.”

The moose appeared to become trapped in a bogg hole; its hind legs were firmly planted in the snow. It tried to get itself out, but it wasn’t moving.

Anstey explains how something like this can affect a moose: “When a moose gets distressed, they pin their ears back, their hair stands up on their back, and they lick their lips a lot,” he said. “You could tell he was extremely distressed.”

A few riders from Anstey’s group grabbed shovels and walked to the moose’s rear. They wanted to avoid being kicked by those lethal hind legs once he started to move.

“After he realized he wasn’t moving, he just stopped and lay down,” said Anstey.

It took the men a few minutes to dig a path behind the moose. One of the riders hopped back on their vehicle and rode up beside the animal. They coaxed it to turn around so it would realize it was free.

“The moose realized it had footing on solid ground and managed to pull himself out of the hole,” Anstey said.

Now unrestricted, the moose hung out to dry off. It checked out its rescuers, peering at them as if to say “a little thank you” before it trotted away. Anstey says moose are quite common in Newfoundland’s backcountry. If you come across a moose or any animal in distress, he advises contacting the proper authorities rather than attempting to rescue it yourself.

“I wouldn’t recommend rescuing it even though we did because we’re experienced outdoorsmen,” he said. “You don’t want to get close to a big animal like that as they can charge or do a lot of damage.”

This is Anstey’s second moose he’s worked to rescue. He does all he can to not interfere with the affairs of wildlife: “We’d like to be known as a backcountry riding clinic and not a moose rescuer,” said Anstey. “We do what we need to do to help the wild as much as possible and give them their space.”

Man and wildlife aren’t always meant to interact; sometimes we need one another. It’s during those times when beautiful rescues like this one occur. The moose required the men’s help; it sensed they were there to aid it. I don’t want to think about what might have happened to it if they hadn’t found it.