Sick boy who told mom he ‘had enough of life’ gets over 10,000 birthday cards from total strangers 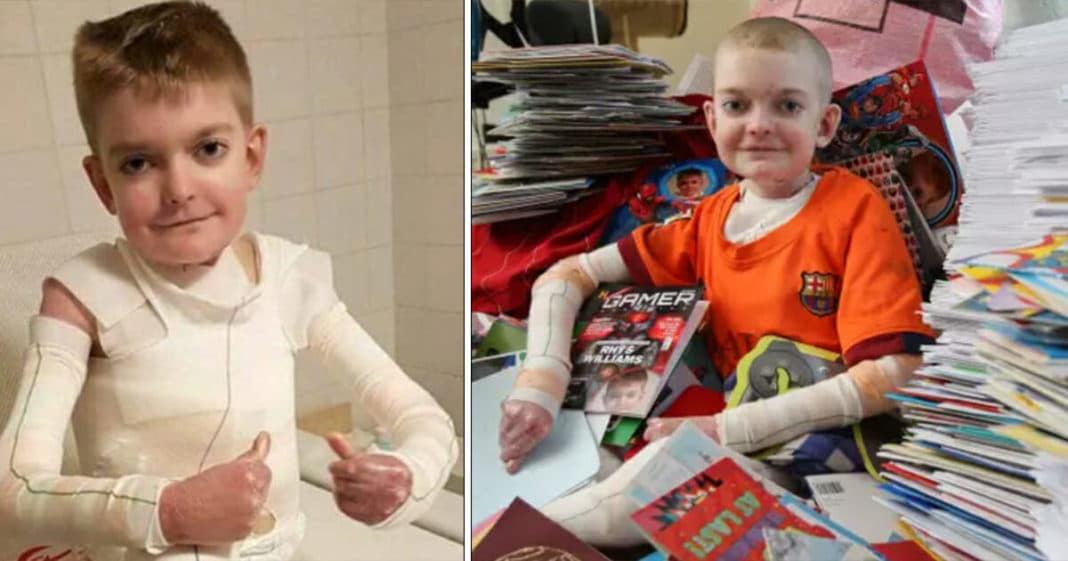 Rhys Williams, a teenager from Bolton, United Kingdom, has had a very hard life.

He was born with epidermolysis bullosa, a condition that causes painful skin sores and blisters all over his body. The condition also caused his fingers to fuse together, and the slightest knock can cause open wounds and blisters to his skin and internal tissue.

At age 13, Rhys uses a wheelchair to get around and needs to have his bandages changed three times a day to prevent infection. He has to eat food through a tube because solids can result in his gullet blistering. Rhys lives every day in almost constant pain.

In fact, things had gotten so bad, that he reportedly told his mom, Tanya, that he was tired of living.

Rhys celebrates his 14th birthday on September 21. Tanya sent out a heartfelt plea online for birthday cards to cheer her son up. She wanted him to know that he wasn’t alone and that people cared and wished him well.

This made me feel so sad? I've just sent my card❤️ If you get minute and have some spare money send him a birthday card, bless him? His address is below.

Within a matter of a few days, they received over 10,000 cards, packages, and online messages.

According to Tanya, her son is nos smiling from ear to ear: “He is loving it, he is so happy. It restores your faith in humanity.”

Anyone fancy sending Rhys a birthday card for his 14th birthday? Mum says he’s feeling fed up and that cards cheer him up and gives him hope.

“I’ve had thousands of messages on Facebook, I try and answer each one. It’s fab.

“All the cards are just as nice and kind as the next. His favourite present so far has got to be his gaming headphones and Xbox game from someone in LA.

“He has just had a card from the Doctor Who production, he’s had cards from football clubs, supermarkets…”

The mother of Rhys Williams, who is battling a rare skin condition, pleaded for people to send him a card in a desperate bid to show him he has something to fight for

“We have received about 7,000 cards just today (Saturday). We got three-and-a-half thousand on Friday. I can only just see my living room floor,” she continued.

“He is opening each card and reading it, and he’s got his friend opening them too. He is taking his time with each one which is why it is taking so long.”

Rhys has been beating the odds since he was born. When he was born, there were no guarantees that he would live to reach his teens.

Sadly, there’s currently no known cure for Rhy’s condition. Instead, doctors have to treat his pain.

“It’s gone worldwide. He’s been on the telly in Chile. He got a card from Qatar today and loads from America. It’s just gone everywhere.

“I just want to say thank you. That’s all I can really say at the moment, I’m so overwhelmed by it all.”

Please be sure to share this story with your family and friends, and feel free to send Rhys your happy birthday wishes!