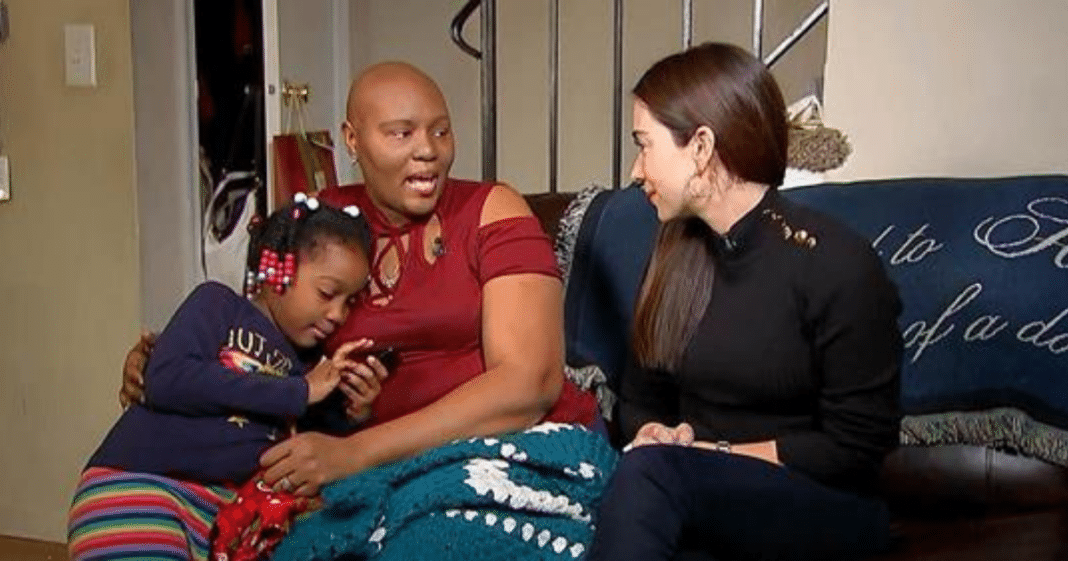 Due to the longest government shutdown in American history, nearly 800,000 government employees and an estimated 1.2 million contractors missed two paychecks. As the standoff reached 35 days, some people had to contemplate a decision of either paying their rent or paying for essential healthcare. One such federal worker and veteran, Quashawn Latimer, had to make a call between her rent or chemotherapy for cancer.

Latimer, a mother of three from Millersville, Maryland expressed what she felt on MSNBC as the government failed to send thousands back to work.

“It makes me feel at this point, invisible. I’ve been supporting, as a federal worker, the government for over 11 years,” said Latimer.

The 43-year-old Navy veteran who works for the Department of Treasury put a face on the life-or-death decision facing thousands of Americans.

“Although personally, I feel like we have nothing to do with this political decision that’s going on in Washington, we’re being affected; real-life people are being affected with real-life, day-to-day decisions.”

“Putting cancer in your budget is unexpected, but we just have to deal with it.” – Quashawn Latimer, a furloughed breast cancer patient on brink of eviction. Hey @MSNBC @marianaatencio how can the public help her? Which #cancer non-profits are able to help? pic.twitter.com/JRCaMUi7qN

Faced with the tough decision, Latimer decided her last chemotherapy treatment, the last of 20, would take precedence over paying the rent. Then she would require expensive surgery and radiation treatments and she didn’t know how much the cost would be.

“I can’t negotiate with my chemo. That has to happen. If it’s the chemo or the rent, chemo wins,” she said.

She explained how scary it was to make such a dangerous choice. She told CBS Morning Live that she was “taking it day to day” but the prospects looked bleak without help.

"Are we going to pay the rent or are we going to pay for chemo?"
Furloughed U.S. federal worker and U.S. Navy vet Quashawn Latimer tells #CBCNN's @cbchh about the hard choices she and her family are facing during the record breaking U.S. government shutdown. pic.twitter.com/mdDZ8V3wLF

Then, early this week, Latimer scheduled her last cancer treatment and got startling news. An anonymous donor had paid for everything.

“Someone called in to the hospital and took care of my account. They wiped out my entire balance.”

The donor, who is now being dubbed a “shutdown angel,” had seen her on TV and wanted to help her. Not only did they pay for her treatment, but the shutdown angel paid off her rent for the month of February.

After furloughed worker Quashawn Latimer sat down w/ @MSNBC’s @marianaatencio to share her story of having to choose between chemotherapy or rent during the shutdown, a viewer stepped in to pay Latimer’s rent & medical bills. Learn more via @nbcwashington: https://t.co/aYQgoXBRGn