He Sees Man Dump Mystery ‘Lump’ On Side Of Road, Heart Breaks When He Realizes What It Is 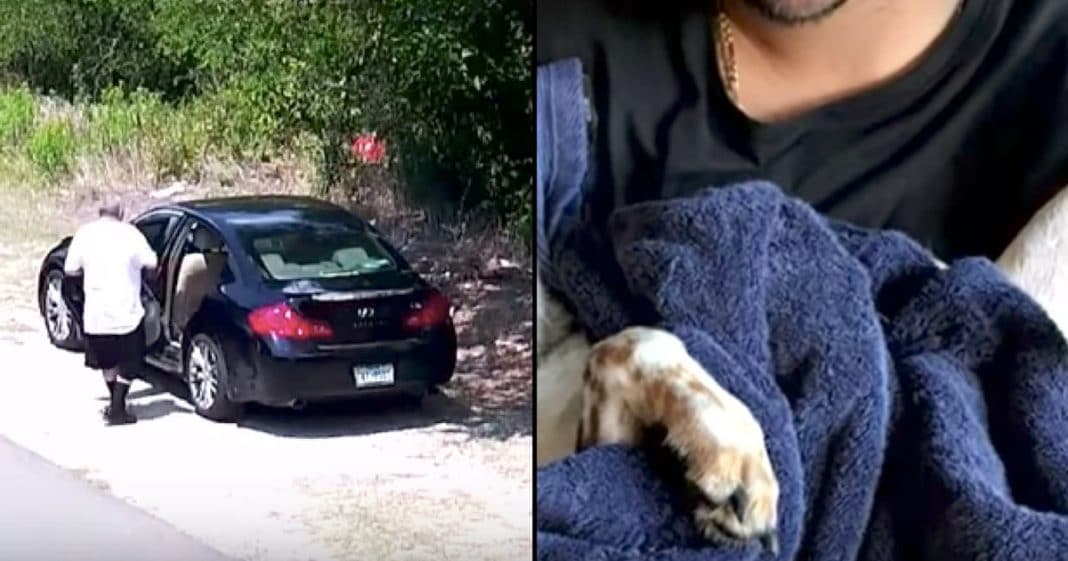 Our hearts break when we hear stories of animals being left at the side of the road by careless or cruel owners. Why would someone do this to a poor, loving, defenseless animal?

Despite the resources and help available for owners going through tough times, folks still think leaving their pet behind is a better option than surrendering them to a shelter where they might find a new loving family.

KD is one such pup who’s story thankfully has a happy ending.

Back on August 4th, the one-year-old black and white mutt was dumped on the side of the road near Dallas. Surveillance cameras installed by the Texas Marshalls Office captured a man removing KD from his sedan and abandoning her near a wooded area.

A warrant was put out for the driver’s arrest. Gorge Spears, 52, turned himself into police about a month later.

KD’s new owner, Zachary San Roman, is thankful she’s in a better situation today. A few weeks can make such a difference in the life of a dog.

“It’s terrible. It’s sad, but at least now we can give her a happy home,” he said. “She doesn’t have to worry about her past anymore.”

James Bias, president of the SPCA of Texas, explained the perils of leaving a dog on its own to fend for itself.

“Dogs on their own tend not to survive without human support,” he said. “They can end up dying of starvation or being hit by a car. The outcome is usually not a positive one, and this is a violation of the state cruelty statute.”

After turning himself in, Spears had a ready explanation for leaving KD on the side of the road. According to authorities, his sister couldn’t afford to take care of the dog. Bias isn’t buying it.

“There are so many options for current pet owners who have to give up the pet,” he said. “The best scenario is for [the owner] to find [the dog] a new home. If you find you’re not successful in rehoming your pet, then certainly reaching one of the sheltering and rescue groups in the community, so you’re not asking the animal to survive on their own in the wild.”

KD was found to have heartworms, but thankfully she had no further health complications when she was handed over to the SPCA.

Just four days after arriving at the shelter, her new owners came looking for a new pet. The trio fell in love.

“We fell in love immediately,” Reagan Henderson said. “She put her paws on our shoulders and was licking our faces.”

As to her name, KD was named after Kevin Durant, the basketball player. Henderson explains: “My family has a tradition of naming our dogs after professional basketball players,” Henderson joked. “We’ve had a Michael, we’ve had a Jordan. I have to stay with the tradition. It’s a little more difficult with female dogs, but we thought KD was a good fit.”

Henderson said she and her boyfriend were clueless about KD’s past when they adopted her. All that changed when she was browsing the SPCA Facebook page. She came across the surveillance feed.

“I immediately started crying, ‘Not my baby,’” Henderson said.

“She had been out for a long time without water, so I’m sure it was a tough situation for her. We were just thankful she wasn’t hit by a car.”

Now KD is living a perfect dog’s life. San Roman said her experience of neglect doesn’t appear to have had a lasting effect.

“She loves car rides,” he said. “She just likes to lie down and look out the window or just relax. She always finds a way to relax anywhere you put her.”

It would be fabulous if all animal abuse cases ended so well. We’re so happy for KD and her owners and wish them all the joy in the world!

Were you happy to see KD rescued and adopted into a loving home after the abuse she suffered? So share this!