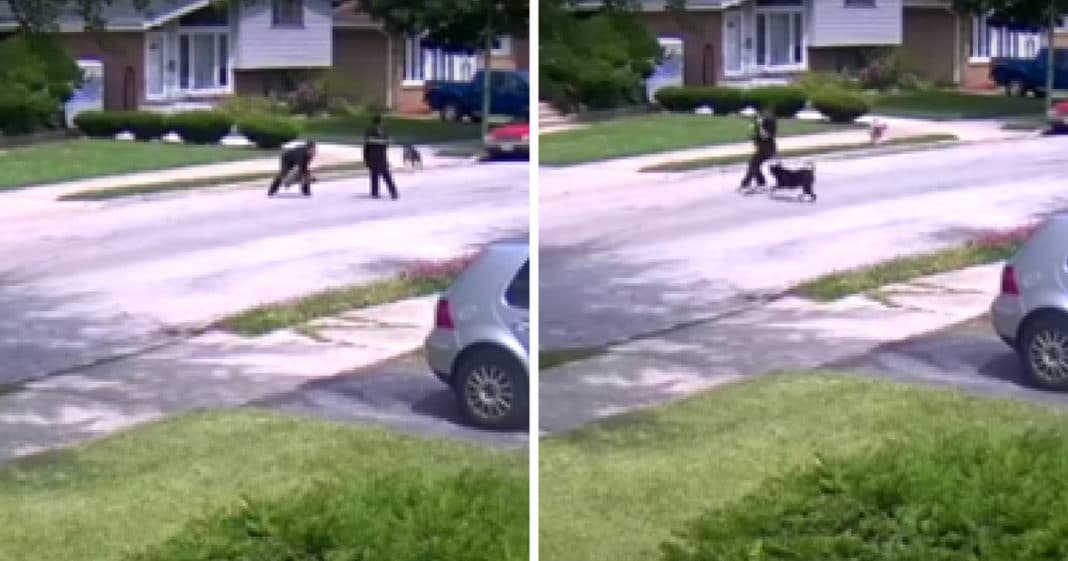 Taking your dog out for a walk can usually be a pretty relaxing experience.

Unfortunately for one woman and her friend who were walking a small dog, their afternoon walk quickly turned into a terrifying nightmare.

The two women were heading back home and just happened to cross the street where a homeowner had surveillance cameras. They had no idea what they were about to face, but the entire ordeal was caught on video.

The footage, which shows the two women making their way off the sidewalk and onto the street are suddenly caught off guard by an approaching Pit Bull.

It appears he’s headed straight for their pet. As he continues to charge, the woman quickly pulls her pup up by the collar and into her arms.

Incredibly, this doesn’t deter the pit bull and it continues to launch himself at her as she tries to keep her dog out of reach. This continued for several seconds but it must have felt like an eternity.

During the scuffle, the Pit Bull even managed to bite the pup’s leg as the woman fought for his life.

As they made their way towards her driveway the friend was able to open the door to the parked car and quickly placed the dog inside. Yet, the savage Pit Bull still chased the woman a few more feet until he realized his prize was missing.

A moment later, the Pit Bull’s owner showed up with its’ collar and leash. It’s not exactly clear why the Pit was running lose but it’s a good thing he wasn’t able to do more damage.

If it weren’t for the woman’s quick thinking, her dog could’ve sustained more serious injuries.

After Chicago Animal Control viewed the video which was uploaded to YouTube, they “deemed the attacking dog needs a special investigation due to the unprovoked nature of the attack.”