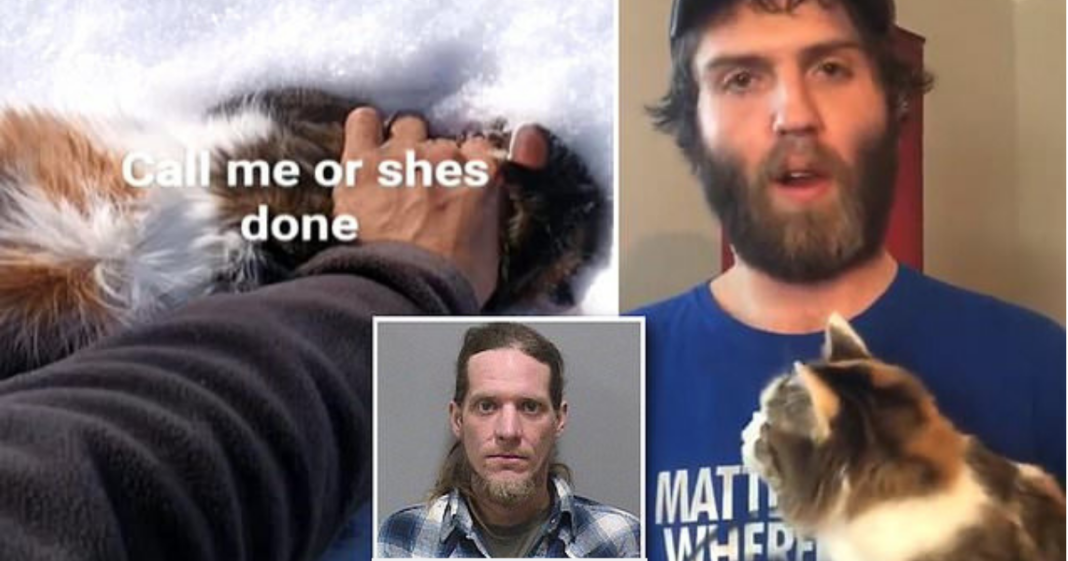 A Vinton Iowa man is accused of breaking into a former roommate’s house, stealing his cat named Gladys, torturing her, and then sending pictures of the torture to that man on Snapchat. Why? Spencer Kimm says he believes the man responsible:

“…was using the cat as a way to get Kimm’s sister to talk to him.”

That’s right. Kimm says he believes that 30-year-old Chad Toney committed horrific animal abuse, documented everything himself, and sent photographic and video evidence – all in the hopes of forcing a relationship with Kimm’s sister.

Not only that, but Kimm says that when Toney refused to give the cat back, and he told him he would take the evidence public on Facebook, Toney responded:

A friend of Kimm’s, Dillon Franzenburg, tried to help get Gladys back.

“We gave him a choice: give us the cat, or go viral. And he said go viral,” said Franzenburg.

Well, go viral it did. Kimm posted the photographs to Facebook, where they reached over 3,000 shares before they were eventually taken down. Kimm removed the post when Toney and his family started receiving threats from outraged people.

One Caption on a photo of a distressed Gladys read:

According to the Daily Mail, other photos allegedly showed Toney:

“…stuffing the cat’s head into snow and placing a wire around its neck, which Toney also documented with video to further torment his owner.” 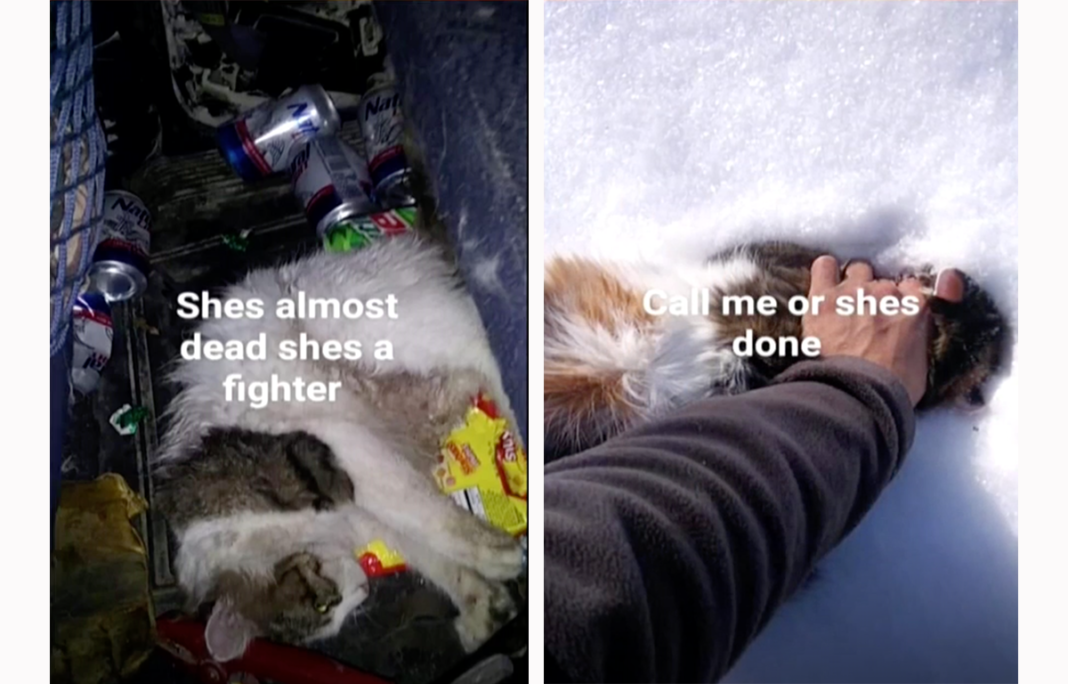 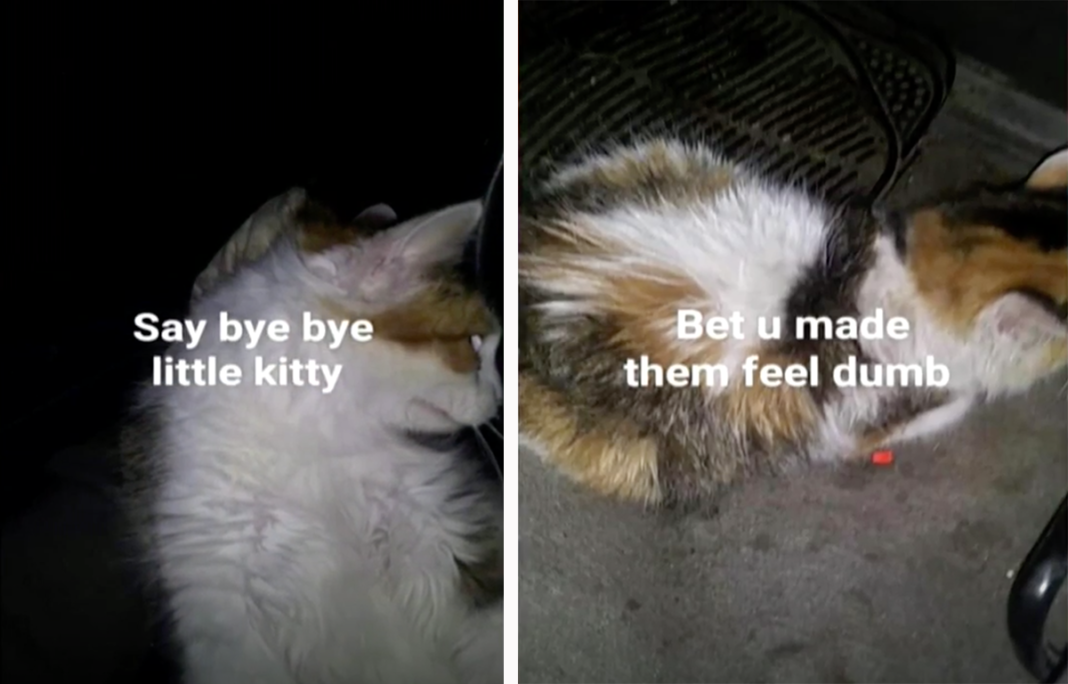 It might be the most psychotic attempt to get a date we’ve heard of, right before Valentine’s Day, no less. Because nothing says “romance,” like stealing a family pet, considered a member of the family, holding it hostage, and torturing it in order to get a woman on the phone.

Not to mention practically begging for proof of crimes on Facebook. If this is what actually happened, it’s absolutely insane. Even worse, since it happened in Iowa, the law would count the alleged abuse as an aggravated misdemeanor, not a felony.

“Doing that to animals is not right,” said Franzenburg.

“It should be way more than a misdemeanor like it is in Iowa.”

The incident happened on February 1st. After allegedly breaking into his home, Kimm says Toney started sending him the twisted photographs of his beloved Gladys, who has two kittens.

After Kimm went public with the proof of abuse, and Toney’s family started getting backlash, they agreed to cooperate in helping him get Gladys back, The next day, Kimm picked her up at Toney’s parents’ home.

“She was really dirty,” said Kimm. “We gave her a bath right away.”

Having his beloved feline back at home, Kimm finally had peace again.

“The second I saw her, I was like a kid in a candy shop,” Kimm said.

BREAKING: Gladys, the cat who was stolen from her owner in Benton County, and abused, is now back SAFE with Spencer Kimm. More exclusively on KGAN CBS 2 at noon.EDIT: Spencer and his friend Dillon want to make clear, they do not know where Chad is, and wish him no harm. They hope threats and ill-will toward him stops, and instead, he gets adequate mental health resources.

On Thursday, February 7, the police were still looking for Toney until around 9:30 a.m., when he turned himself in. He was held in the Benton County Jail awaiting his first court appearance.

“30-year-old Chad Toney turned himself into authorities at 9:30 a.m. Thursday and was charged with third-degree burglary and animal abuse. He also had a warrant out for his arrest for driving while barred.”

Here is the new booking photo for 30-year-old Chad Toney, accused of stealing and torturing a cat.

Following the news that Gladys was safe at home, Kimm told reporters that he wanted to use the experience to help change Iowa’s laws governing animal abuse.

“We want to thank everyone for all their help and support big and small throughout everything. Nothing went unnoticed. Gladys sends love to everybody. And I’m also going to be working with Preston Moore [the Iowa State Director for the Humane Society of the United States] to hopefully get Iowa’s animal abuse law stiffened in Gladys’ name.”

We hope that Kimm is successful in getting Iowa’s law changed. Treating any animal like this shouldn’t be a misdemeanor. It should be a felony.

See more in the videos from CBS2 News reporter, Eva Andersen on Facebook:

Stolen, abused cat is back safe with owner

FULL STORY:Spencer Kimm says he felt like "a kid in a candy shop" when he first saw Gladys, after she had been missing for days, and tortured.He tells us who he believes did it, and what his reason was.

Below are Gladys’ kittens 🙂

Not only is Gladys back with her owner Spencer, but with her 2 kittens. Watch the full report coming up on CBS2 news at 6.