She Said Wedding Vows To Love Of Her Life, Just 18 Hours Later She Died From Breast Cancer 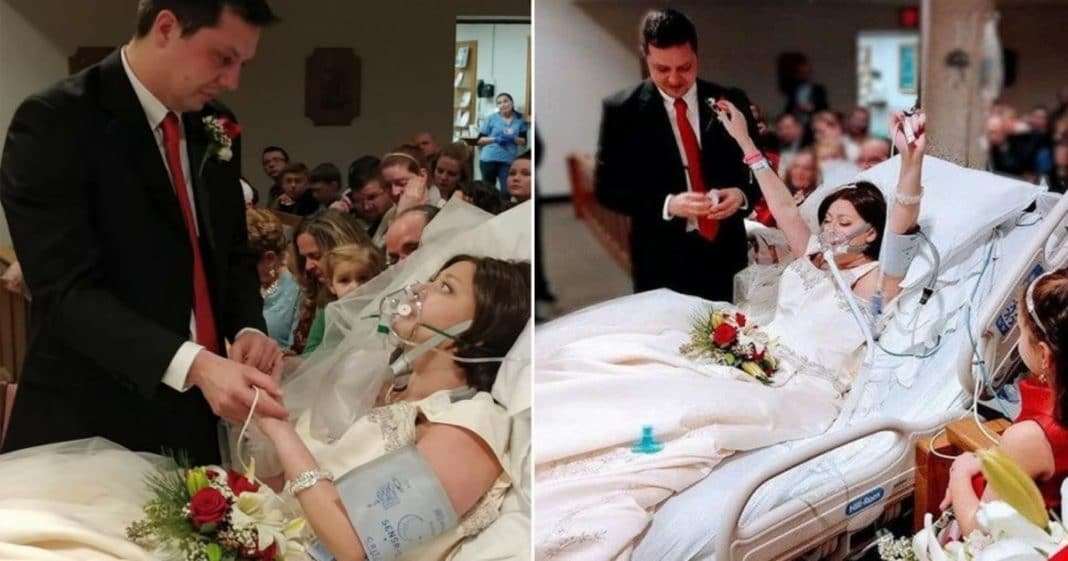 A couple remained together even before taking their vows. When some relationships would’ve ended, David Mosher, 35, and Heather Lindsay, 31, stayed true to the particular pledge of loving each other through sickness and health.

The Connecticut couple got to actually speak those vows just hours before Heather passed away. She lost her 1-year battle with breast cancer: “It was more like a funeral than a wedding, to be honest. It was the hardest hour of my life,” David told InsideEdition.com.

David and Heather dated for two years when he finally decided it was time to pop the question. The big day was December 23rd, two days before Christmas, 2016.

Heather had a doctor’s appointment that day. There, she received the unthinkable news that she had an aggressive form of breast cancer. Tragically, the disease had already spread to her lymph nodes. This didn’t stop David from proposing.

“I left the plans as they were. I proposed to her.

Standing in front of everyone in the chapel, I was hesitant to pull out my camera. As someone who wanted nothing more than to see my friend truly happy, I felt I had to capture these images, which by this point I knew were her final moments with us. What you clearly see here is two people who were destined to be joined as one. A love like no other captured for all to see. My gift to her.

“We had the toughest year of our life. She struggled with her cancer through the traditional chemotherapy.”

The two hoped and believed Heather’s cancer was under control. But last September, doctors broke the horrible news that it had spread to her brain and lungs.

“We realized [marriage] it was something that needed to happen because she probably wasn’t going to make it.

“They set their wedding date for December 30th, 2017. As the special day drew closer, doctors at St. Francis Hospital in Hartford said Heather probably wouldn’t make it to see her wedding day.

So, the couple changed the date to December 22nd instead. Dressed in her wedding gown, Heather was wheeled to the hospital’s chapel in her hospital bed where she and David exchanged their vows. 18 short hours later, Heather died. Her funeral was held on the day she was to originally marry the love of her life.

I am in awe of the strength Dave's love inspired in Heather even in her last hours. She was his great love and he was hers. I pray these moments give Dave the same strength now to carry on the legacy of their love. Heather, you are greatly missed. The earth froze yesterday as the warmth of your light ascended to be with God for eternity. Until we meet again my dear friend. Watch over us. Original post from 12/24/17.

“We had a great love,” David said. “Don’t take your love for granted because it could be taken away.”

Sage advice from a grief-stricken, heartbroken man. Sometimes, we find that one person we’re meant to love completely. We might lose them all too soon. While we had them in our lives, they changed us; they brought us joy, made us laugh and showed us how to love.

God bless you, David and Heather.