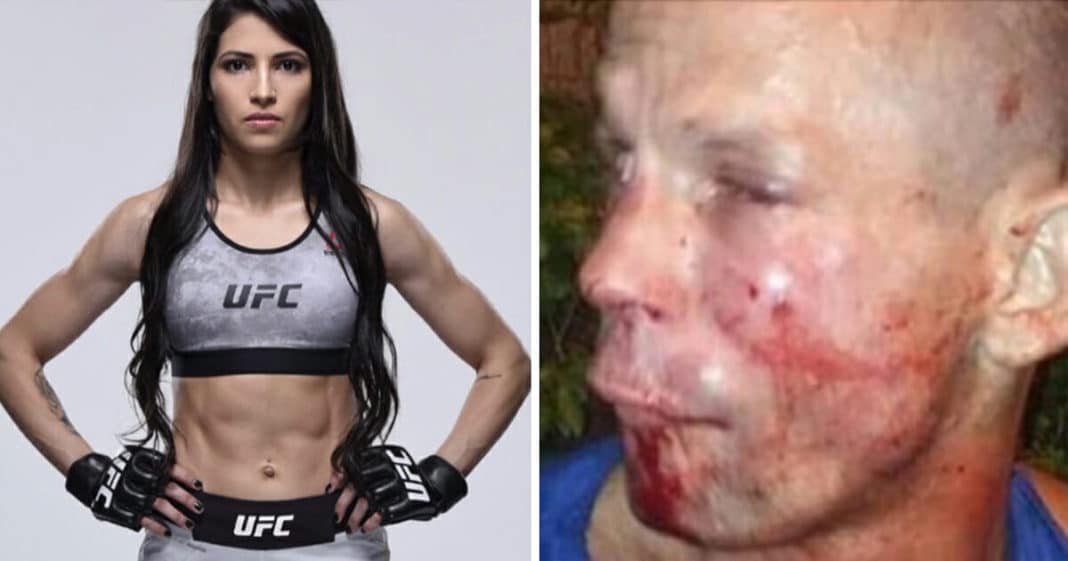 When a man tried to intimidate and rob a young Brazilian woman recently, he got the shock and whooping of his life. Why? She just happened to be Polyana Viana, a professional MMA fighter.

So this young woman was minding her own business while she was waiting for an Uber in front of her apartment and a thug had the really bad idea to try to victimize her.

She felt uncomfortable with him being so near, so she was on her guard. She explained to MMA Junkie.

“When he saw I saw him, he sat next to me,” Viana said. “He asked me the time, I said it, and I saw he wasn’t going to leave. So I already moved to put my cell phone in my waist. And then he said, ‘Give me the phone. Don’t try to react, because I’m armed.’ Then he put his hand over (a gun), but I realized it was too soft.

“He was really close to me. So I thought, ‘If it’s a gun, he won’t have time to draw it.’ So I stood up. I threw two punches and a kick. He fell, then I caught him in a rear-naked choke. Then I sat him down in the same place we were before and said, ‘Now we’ll wait for the police.’”

“I was fine,” Viana said. “I was fine because he didn’t even react after. Since he took the punches very quickly, I think he was scared. So he didn’t react anymore. He told me to let him go, like ‘I just asked for the time.’ I said, ‘Asked for the time my ass,’ because he saw I was very angry. I said I wouldn’t let go and that I was going to call the police.

Apparently the gentleman had instant remorse and was afraid.

“He said, ‘Call the police, then’ because he was scared I was going to beat him up more.”

She held him in a choke-hold and kept his arm immobilized in a kimura-like position until the police came.

Here’s a clip of one of Polyana’s fights.

According to Polyana, the man had been arrested before and had been released. She said they took him to the emergency room to address his injuries, then she went to the police station to file a report.

In a way, I feel sorry for this guy. Stupidity caused him some big problems. However, I bet he’s learned his lesson.