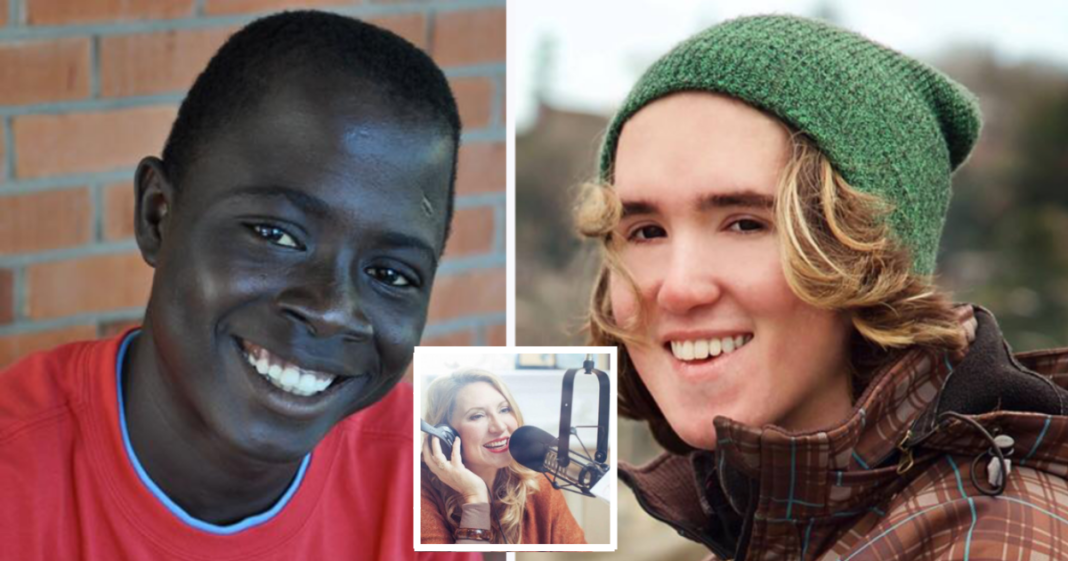 Delilah Rene, known to millions for her nationally syndicated nightly U.S. radio song request and dedication program, has touched people everywhere, allowing people to share their stories as they dedicate a meaningful, sometimes “sappy love song” to the ones they care about the most.

Delilah’s soothing voice offers callers a unique forum and a source of encouragement for people of all walk of life as they deal with sometimes difficult personal situations of love or loss. What many don’t realize is that Delilah has been dealing with her own serious struggles too.

She is a mother of 13, 10 of whom are adopted. She often shares her personal pictures of her big family on social media, and quite often she shares pictures of the two children who passed away, as she copes with her grief.

Me and my youngest, 2 year old baby Paul.

Her biological child Zachariah, or “Zacky” as she called him, committed suicide on October 3, 2017, after an intense period of depression. The debilitating disease took him away from the family who all mourn the loss of their “fearless leader” every day.

Zacharia received counseling and was “embraced fiercely” by family and friends. Now everyone must wonder why he’s gone but there are no easy answers.

“‘My dear friends, I need to share some devastating news with you. In the early morning hours, Tuesday, October 3, my son Zachariah, took his life,’ she wrote to her 1.4 million fans.”

My dear friends, I need to share some devastating news with you. In the early morning hours, Tuesday, October 3, my son,…

After the sad news, Delilah took a break from radio and social media.

She posted more pictures of her beloved son this year to mark what would have been his 19th birthday.

“Today is Zachariah’s birthday. It’s gonna be rough. Indulge me while I share picture after picture of my beautiful baby boy as we celebrate when he came into this world.”

Today is Zachariah's birthday. It's gonna be rough. Indulge me while I share picture after picture of my beautiful baby boy as we celebrate when he came into this world.

Another picture was posted with the caption:

“This kid, always ready to pose for the camera!”

This kid, always ready to pose for the camera!

On April 16, she shared a picture of Zachariah enjoying his last birthday cake.

In the comments, Delilah said she was at peace knowing her son was in a better place but struggles to walk a “difficult path” when she misses him.

“I know where he is, or where his future lies. It’s that missing heartbeat, that voice I’ll never hear again, that hand I’ll never hold. That’s where peace is elusive. ?”

Sadly, Delilah lost another son, Sammy Young Dzolali Reneon March 12, 2012, due to complications from sickle-cell anemia. She shared a touching message to him, saying that her family still suffered from a broken heart of losing him.

“I’m glad you no longer suffer and that you don’t live in pain, death has freed you from that. But now those of us who loved you, are left to suffer the pain of a broken heart.”

Dear Sammy,Today marks the fifth year anniversary of your passing, and most people think that the mourning should be…

She remember Sammy for his smile:

“Your smile and your silly laughter, your fun dancing and your art, your passion for living and laughing and the way you said “it’s so boring”! You came into our life like a warm wind and filled our hearts with your love.

For the millions of fans that follow her, they are touched that she shares her personal journey on Facebook and leave her countless comments of support and love as she endures the loss of her two sons.

Delilah has released a new book, One Heart At A Time, in which she explains her personal journey and what she refers to as the intrinsic God-given knowledge that “we need one another to survive.”

She encourages everyone to reach out to each other’s hearts in a world that teaches us to focus on “becoming successful” and “getting ahead” instead.

“…Believe in a young person, and you will change the world for that person.”

She believes that the world of technology can sometimes keep young people from making invaluable connections with each other.

“Teach a young person that talking is better than texting and reality is better than virtual reality – and indeed you will be doing that child and this world a great service.”

You may hear Delilah’s show at her podcast here or the iHeartRADIO app here.