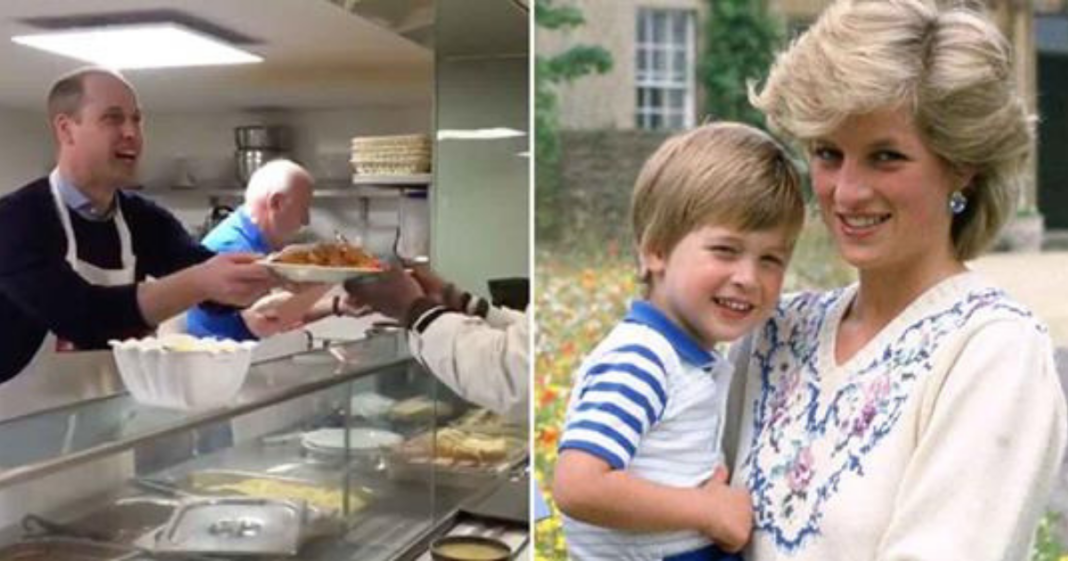 Prince William took a rite of passage the day before Valentine’s Day, taking on a role that his mother, the late Princess Diana introduced him to 26 years ago in 1993. The Princess of Wales took William and Harry to the Passage Charity that year when he was just eleven years old. They later returned for visits on occasion. Today, His Royal Highness has returned, volunteering to serve lunch with a group of kitchen volunteers.

After preparing and serving food with a big smile, he met with some of them to discuss the life-threatening problems they face, such as finding basic shelter and a place to sleep.

The Duke helps serve lunch alongside Malcolm (on the right), who’s been volunteering at the @PassageCharity for 21 years. pic.twitter.com/QGyR01T3Bn

In a statement about his visit, Prince William said:

“The visits I made as a child to this place left a deep and lasting impression upon me—about how important it is to ensure that everyone in our society, especially the poorest, are treated with respect, dignity, and kindness, and are given the opportunities to fulfill their potential in life.”

2,651 homeless people were supported by @PassageCharity in 2017/18 – this was made possible with the help of the charity’s 450 regular volunteers who work 24 hours a day, 365 days a year. pic.twitter.com/P0xSVsCMAd

Kensington Palace announced that the Duke of Cambridge would take on the Passage as one of his charitable patronages. He plans to work closely with the group for years to come. The palace announcement featured a photograph of Princess Diana’s visit with her sons from the 90s. It also showed Diana and William’s signatures in the guest book, with a large and flowing Diana signature above a much smaller one by her son.

This entry in The @PassageCharity visitor’s book marks The Duke of Cambridge's first visit with his mother Diana, Princess of Wales in 1993. pic.twitter.com/iKgC5pQMaB

The Passage runs London’s largest volunteer-based resource center for homeless and vulnerable people, serving up to 200 men and women every day. Today, demand for their services has increased by almost 50 percent since last year, with over 3,200 homeless people sleeping at their center in the past 12 months.

The Duke of Cambridge joins volunteers in the kitchen as they prepare spaghetti bolognese for the @PassageCharity lunch service? pic.twitter.com/4gMpczLbnn

“During His Royal Highness’ visits to The Passage, it has been very clear that he has a deep concern for those affected by homelessness and a real interest in our work.”

“For His Royal Highness to further express his support for The Passage’s work by becoming our Royal Patron is a tremendous honor, and a testament to how much he genuinely cares about this issue.”

As part of his work with the Passage, the volunteers take part in the “Home for Good” program, which helps the homeless and those facing difficulties secure permanent housing solutions. Princess Diana would no doubt be so proud of her son for taking on the charitable works that meant so much to her.

Meeting clients and volunteers from @PassageCharity’s ‘Home for Good’ Programme.

The programme pairs formerly-homeless clients with local volunteers to help them settle into their new homes and community life. pic.twitter.com/JrKh3L3n0z

In another recent visit, Prince William visited The Passage with the Duchess of Cambridge in December 2018. There, they listened to workers about the challenges related to homelessness, followed by taking part in arts and crafts before the center’s holiday party.