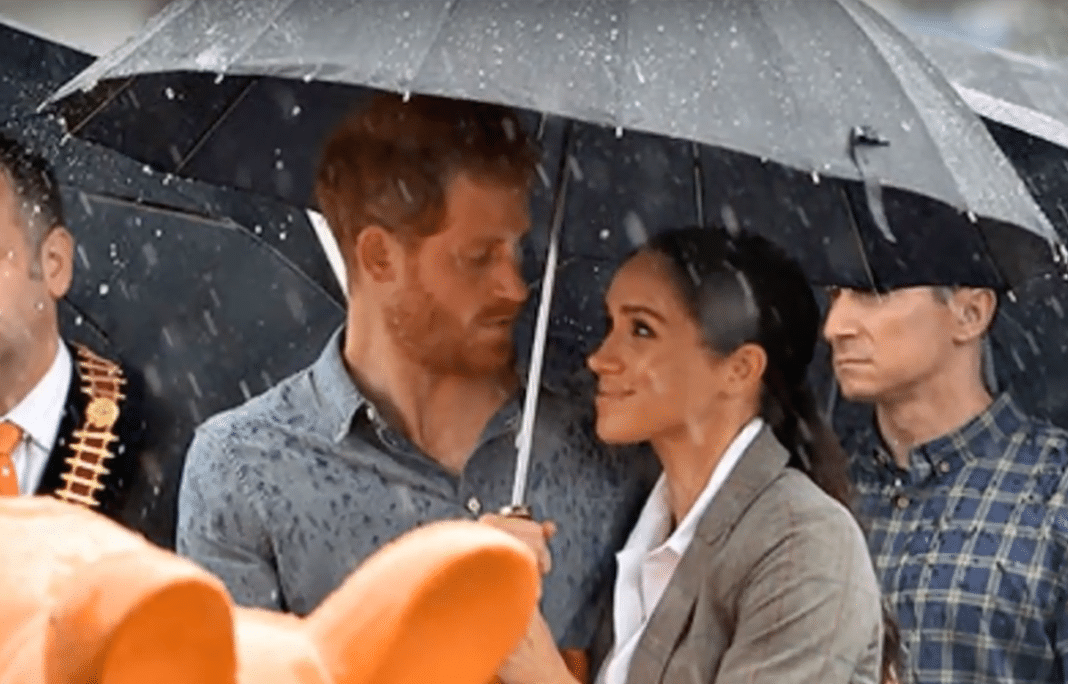 Farmers in the Queensland, Australia area have suffered from a severe two-year drought. The farmers have also been struggling for a decade from the Millennium drought, the worst in recent centuries. Now some relief came in the form of Prince Harry, 34, and his wife, Meghan Markle, 37, who announced Monday she is expecting their first child. As the Prince gave a speech in rural Dubbo, Australia, an unexpected downpour fell on the crowd, and Harry and his wife took turns sheltering each other under an umbrella.

Dubbo is on the east coast of Australia northwest of the city of Sydney. It was the second stop on the royal couple’s whirlwind 16-day tour of Australia, Fiji, Tonga, and New Zealand. When Prince Harry took the stage to deliver a speech honoring the people of Dubbo, the heavy rains were a welcome, if a bit chilly sign for the agricultural community. 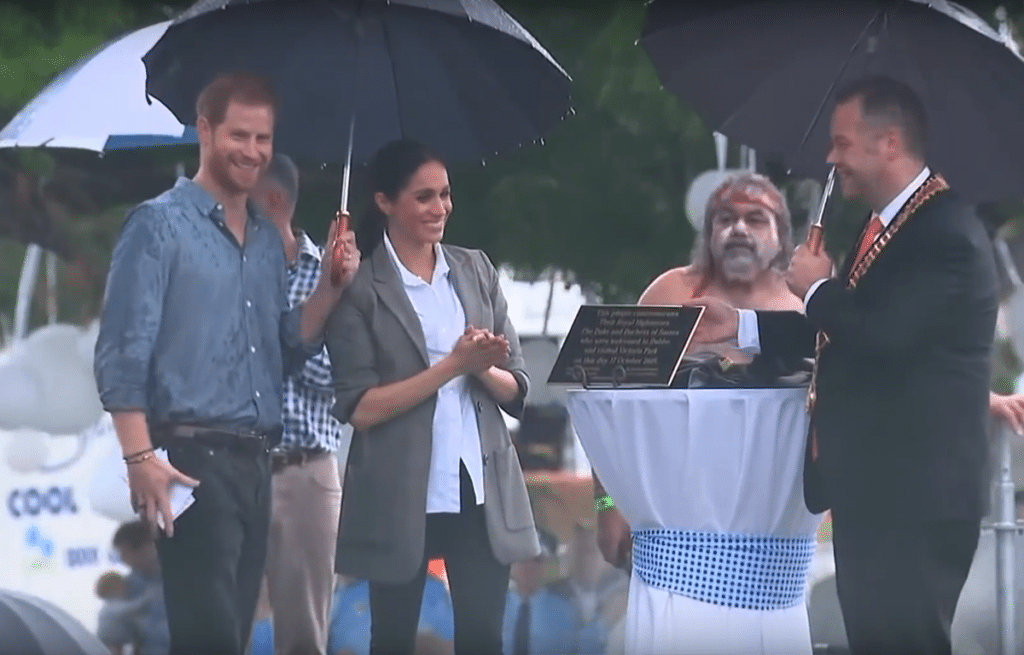 Although the couple could have easily had someone hold their umbrellas, Meaghan Markle gladly took to the stage to shelter her husband for the duration of his speech. Dubbo Mayor Ben Shields offered the Prince his umbrella, but Harry replied: 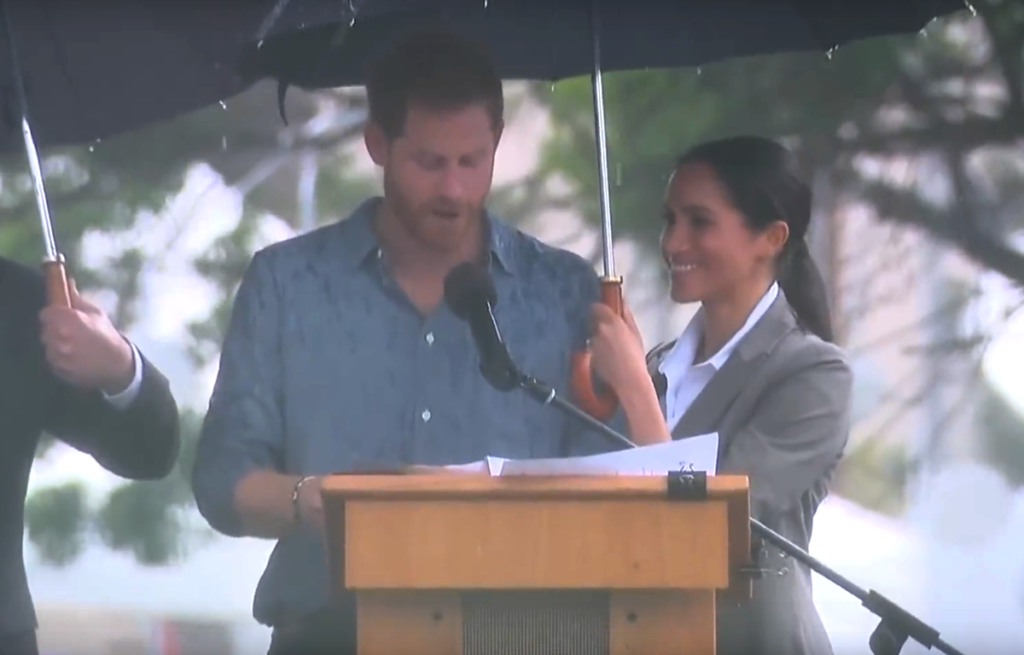 The Duchess of Sussex holds the umbrella for the Duke

After the Mayor joked that he was pleased the royal couple had brought “that terrible English weather” to the area, Harry offered his support to the community. He praised the tough people in the area as “the salt of the earth” and the “backbone of this country.” Harry acknowledged the hardships faced by rural farmers whose crops were failing:

“Hardship brings out the best in people.”

Although they were falling on hard times, Harry noted that the people he met there were all smiles despite it all. He even dubbed Dubbo “the City of Smiles.”

On a more serious note, Prince Harry discussed the serious problems that the people of Dubbo, particularly the young men in the rural area face. Facing a bleak future, they are so distressed that they are committing suicide at a higher rate.

“It must be hard not to lose hope when you endure so many dry months end on end knowing that you are powerless to do anything about it.”

“We know that suicide rates in rural and remote areas are greater than in urban populations and this may especially be true among young men in remote regions,” he continued.

Prince Harry called on those suffering to ask for help, something that he has personally done after losing his mother, Princess Diana. Years of counseling have helped him cope with the loss, anxiety, and bottled up anger that he says caused him to want to punch someone. He wanted everyone to know, seeking help for mental health issues is nothing to be ashamed of; instead, it is a strength.

“Asking for help is one of the best decisions that I ever made,” said Prince Harry.

“You will be continually amazed at how life changes for the better once you put your hand up. It’s not easy, and there are no quick fixes, but it’s about being the best version of yourself for you and for those around you,” Harry continued. 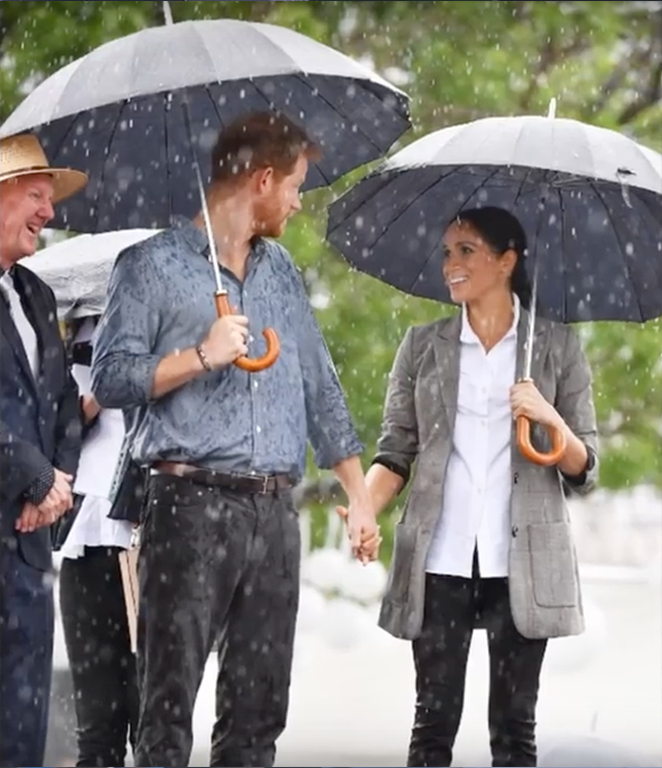 Prince Harry and Meghan Markle walking in the rain together

Prince Harry and his loving wife were undoubtedly a beacon of hope for the people of Dubbo. The message that he sends applies to us all. When times are hard, community and friendships are vital. However, even the strongest and most fortunate of us must ask for help once in a while.

As the Prince noted:

The royal couple’s presence also seemed to be a gift for the people of Dubbo.

See Prince Harry give his speech below: