Pregnant dog who was blinded, had ear cut off, and shot 17 times has now qualified as a therapy dog 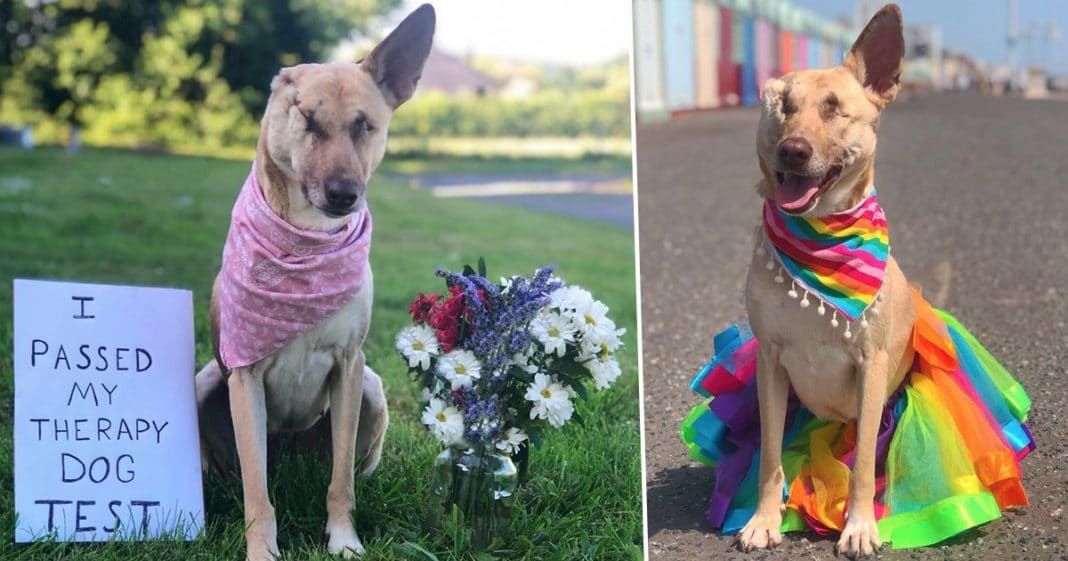 They say we can learn quite a bit from animals. In fact, our furry friends can teach us a lot of lessons we might not otherwise learn on our own.

Well, one fantastic dog named Maggie seems to prove that theory certainly. Only five-years-old, this pup has been through more physical and emotional pain than most of us know in our lifetimes.

Maggie rose to viral fame after she was found in Lebanon with her ear cut off, jaw broken, and eyes shoot out. All told, they believe this pup was shot 17 times before being dumped in the streets. She was also pregnant at the time. 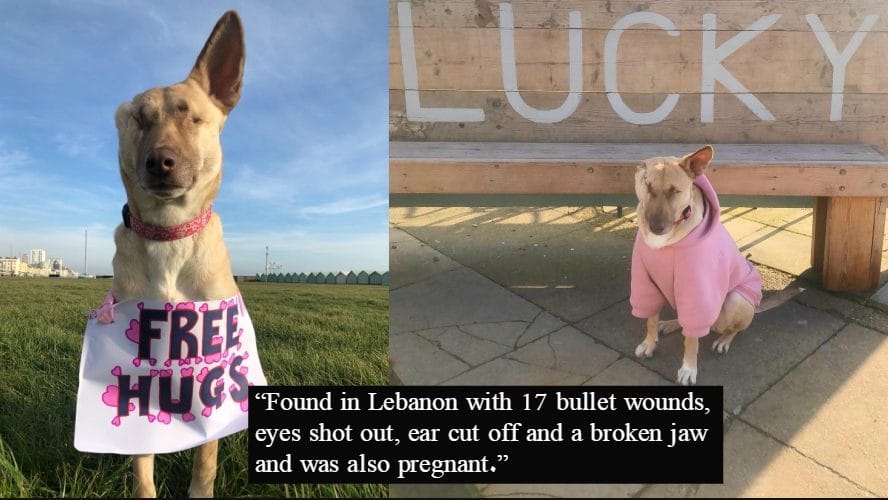 Thankfully, Maggie’s story was far from over. After she was rescued by an animal charity known as the Wild At Heart Foundation, Maggie was eventually adopted by an animal lover named Kasey and relocated from Lebanon to Brighton, UK.

Despite all of the physical trauma, she had to endure, the untold emotional pain she must have gone through, Kasey became a therapy dog. Today she even has a massive following on Instagram.

“This person in Lebanon posted asking for help and a woman in London saw the post and got help,” Kasey told The Argus. 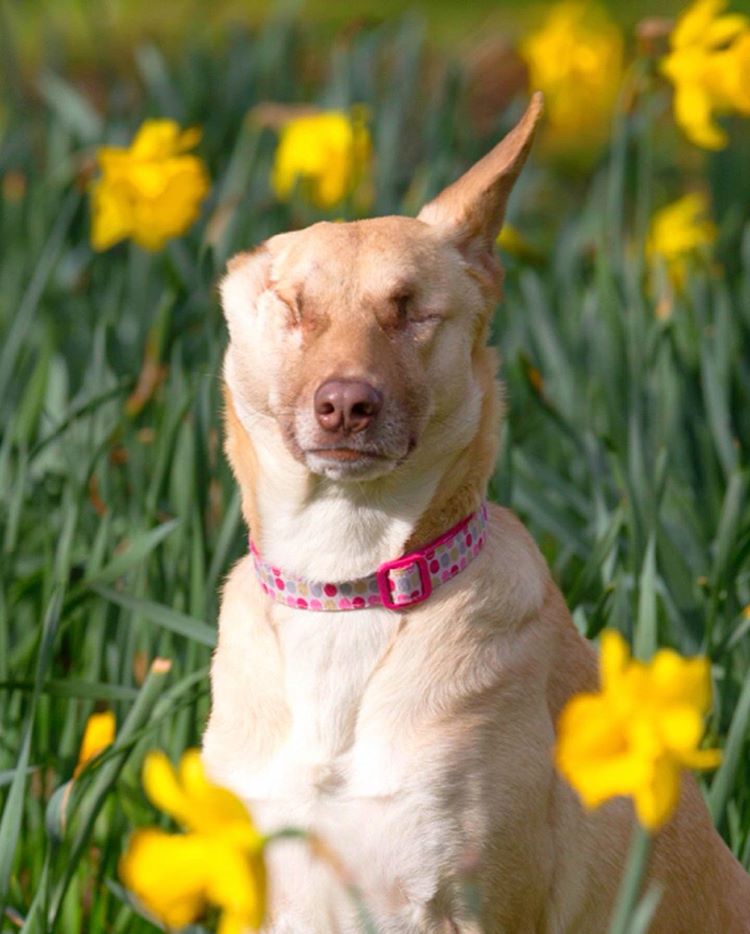 Wild At Heart said they would take her in, even though it’s challenging to get pets out of Lebanon.

“My mum saw Maggie’s post and said we had to foster her.

“I got home and saw the picture and agreed.”

My #tbt is the day I met my mom! Roxana my rescuer flew out to Lebanon to escort me back to England. Roxana and mom we’re both in tears but I was nothing but smile as you can you see!” -Maggie #bemoremaggie • • • Over 9 months ago this little furball came to live with me. I never meant to fall in love… but look at that face! I was defenceless against the adorable powers of Maggie! Back then her name was Angie and she was a little hesitant but she’s always been loving and kind! • • • #rescuestory #rescuedogofinstagram #rescuedogsofinsta #rescuedogsuk #rescuedogsofinsta #happypupper #happypuppers #happydogsclub #happydoggie #happydoggos #adopteddog #adoptionday #ilovedogstoomuch #ilovedogs? #?? #? #?❤

It took a six-month online campaign before Maggie was finally able to leave Lebanon, but now she’s thriving. And with 80,000 social media followers to her name, the pup now tours care homes, hospitals, and universities to help others heal and provide care.

Now that she’s passed the necessary exams, Maggie is a fully-qualified therapy dog with Underdog International. 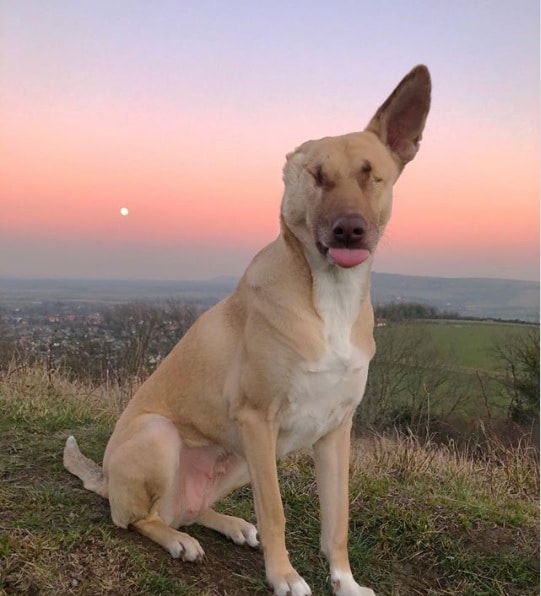 “She and I will speak to schools and work hands-on with youngsters,” Kasey said. 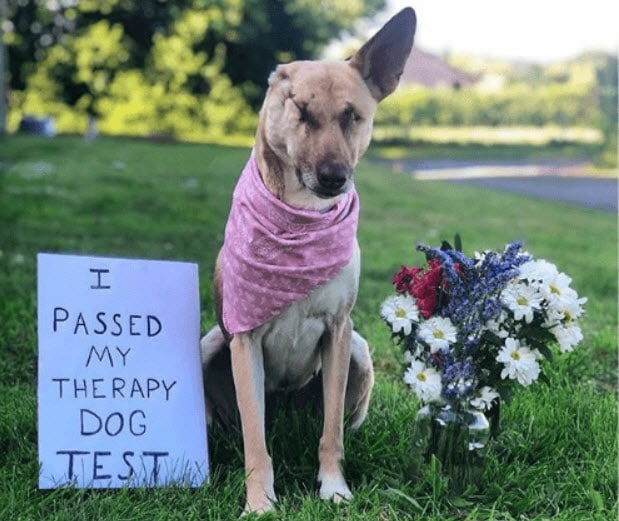 “I know what happened to Maggie was horrendous but if her story can educate and inspire others to do good then at least we can do our part to make this world a little brighter.”

Kasey, we can’t commend you enough for giving Maggie the loving forever home she deserves!

Meanwhile, Maggie herself has taught us all a lesson in bravery and determination, that we can only someday hope to match. We wish this heroic pup all the best in her new calling as a therapy dog, as well as a long and happy life!