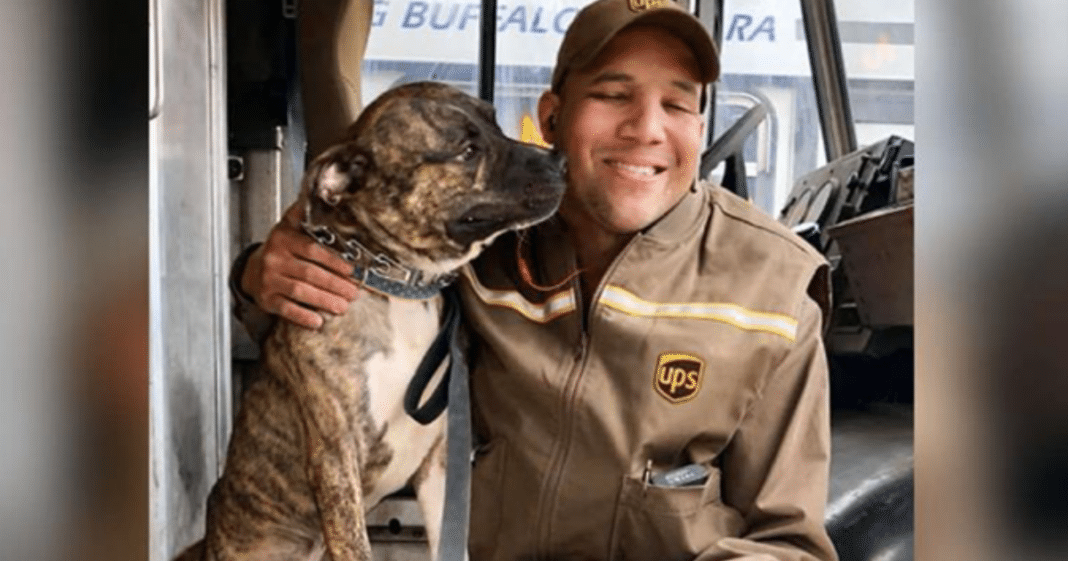 When you think about the interactions between dogs and the mailman, you don’t automatically think about happy encounters. But not all dogs have the territorial response. Some actually love seeing the mailman or the UPS driver approach and run out to the truck with tails wagging, hoping for a treat.

For example, New York UPS driver, Jason Coronado was out making deliveries on October 5 when he pulled up to the Buffalo City Animal Shelter. As he pulled up he saw a pitbull-terrier mix dog named Ernie run out to greet the truck. Coronado could see that Ernie was friendly, so he welcomed him over to the truck.

“[I] call him up to the truck, and he pretty much just hopped up in, and I was like, ‘Okay,’ ” Coronado told WKBW.

Ernie made himself right at home, taking right to the truck and to Coronado. He seemed to know he was where he was supposed to be.

“He hopped up and just sat there and did not want to leave.”

Posted by City of Buffalo Animal Shelter on Friday, November 30, 2018

Eventually, Ernie got out of the truck, and Coronado went on his way. After that, he kept thinking about the friendly dog. He had never thought about owning a dog before, but he couldn’t shake the feeling that this dog was meant to be with him.

It was love at first sight.

“He is probably my idea of a perfect dog,” said Coronado.

“I wanted him to have a good home.”

Back at home, Coronado talked about Ernie with his family. He wanted to know if they would consider bringing a new furry family member home for good, and they happily got on board.

Finally, in November, Coronado made the adoption official from the City of Buffalo Animal Shelter. When Ernie arrived, he took to the home the same way that he had previously taken to the ride in the UPS truck. He was a natural fit. As a bonus, Ernie was already house-trained.

“He likes to sleep and lounge, and he likes to eat treats, and he’s just a big lap dog,” Coronado told WKBW.

See the video below from WKBW reporter, James Groh.

For those who follow the Facebook page, UPS Dogs, these kinds of happy dog/ driver interactions are a regular sight. The page posts pictures and captions that drivers send in of the dogs they encounter along their routes.

While most dogs are friendly, they do get the occasional stinker too.

“During each day, drivers encounter many dogs, most friendly and some not so nice.”

“Find someone that looks at you the same way Ernie looks at his UPS driver!”

Ernie is always looking for something to get into on his morning walks – so today he decided to get into the UPS truck to see if there were any packages with his name on them ??❤️Buffalo City Animal Shelter

This isn’t the only story of a UPS driver who adopted a pit bull that happened to hop into their truck. Last year, UPS driver Katie Newhouser adopted a pit bull named Leo, who she met on her delivery route in California. The friendly dog would sometimes jump into her truck when she delivered packages to a woman named Tina. Unfortunately, Tina passed away, and Newhouser decided to bring Leo home with her.

Leo missed his former owner and grieved for a time. After he bonded with Newhouser’s other dog, Moose, he became one of the family.