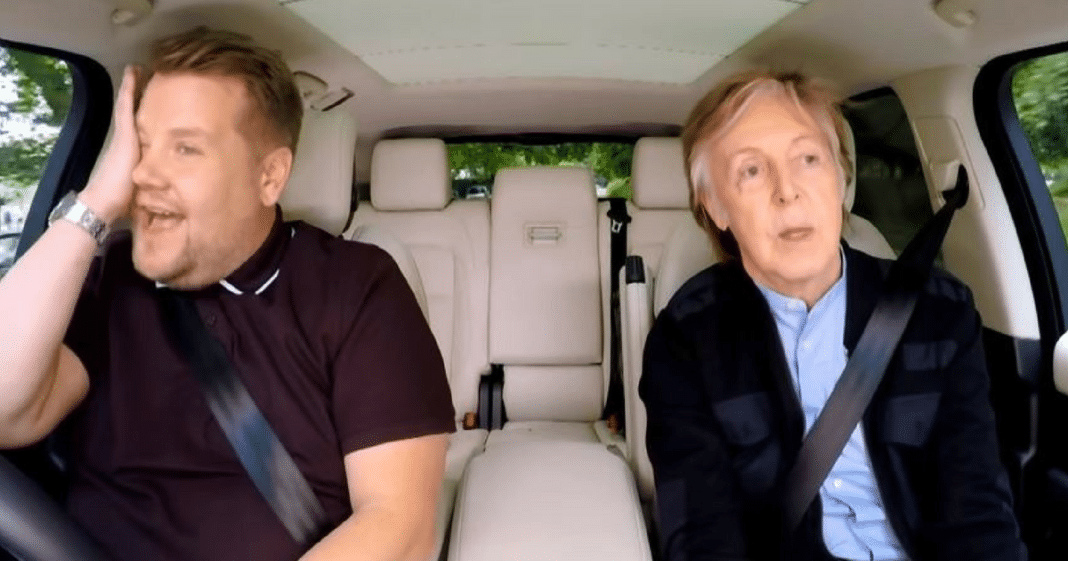 The Beatles are one of the most iconic bands to ever come from England. More than fifty years after they exploded onto the music scene, their tunes are still relevant and loved by every new generation. James Corden, the host of The Late, Late Show, spent a week in the UK filming segments for carpool Karaoke. He had a very special guest give him a guided tour around Liverpool – Paul McCartney.

While the CBS show host and iconic performer and songwriter passed by sites from McCartney’s childhood and early music career, we learned the 76-year-old Mccartney wrote his first song when he was just 14. The two conveniently turn onto Penny Lane before singing the song with the same name. Mccartney pointed out buildings and street signs that appear in the hit.

They even stop by the barbershop where Mccartney signed the Penny Lane wall.

Corden pointed out how the Beatles music is still popular and relevant. “Your music is so full of positivity and joy and a message of love and togetherness. I feel like it’s more relevant now today than maybe it’s ever been,” Corden remarked.

The music icon agrees, saying how he and his bandmates never thought their music would still impact peoples lives after so many years. He admitted they only thought the Beatles would be relevant for around ten years.

While they made their way to McCartney’s childhood home, he told Corden and the audience the story behind how he wrote the much-loved Beatles song, “Let It Be.” Little did the music legend know how powerful this reveal would have on Corden.

Paul’s late mother came to him in a dream and told him, “It’s going to be okay. Just let it be.”

His mother’s words lifted a heavy burden from his shoulders and heart. It also inspired “Let It Be.”

McCartney wasn’t aware of the powerful connection the song had on Corden. As tears welled up in the show host’s eyes, his companion responded to him by saying, “I’ll tell you that’s the power of music. It’s weird, isn’t it? How that can do that to you?”

The Sergeant is back! #SgtPepper #FlashbackFriday Read an exclusive new 'Sgt Pepper' Q&A with Paul HERE:…

Corden relayed the story of how his father and grandfather, (who was also a musician), had him listen to “Let It Be.” they told him this song would be, “the best song you’ve ever heard.”

“If my grandad was here right now, he’d get an absolute kick out of this,” Corden said with pride.

“He is,” McCartney quickly responded as more tears fell from Corden’s eyes.

At McCartney’s childhood home, we got to see where Paul and John Lennon wrote many of the Beatle’s early hits. They ended their day by visiting a local pub that hosted the Beatles in their early days. Corden acted as a bartender. He encouraged a patron to choose a song from the jukebox.

This prompted a curtain to be raised. It revealed McCartney and a full band. The bar patrons were treated to a small intimate concert. McCartney invited Corden to come onstage to perform “Hey Jude.”

There’s no doubt the Beatles music still touches the lives and hearts of millions around the world. Corden’s time with McCartney shows how we enjoy singing along with such memorable songs.