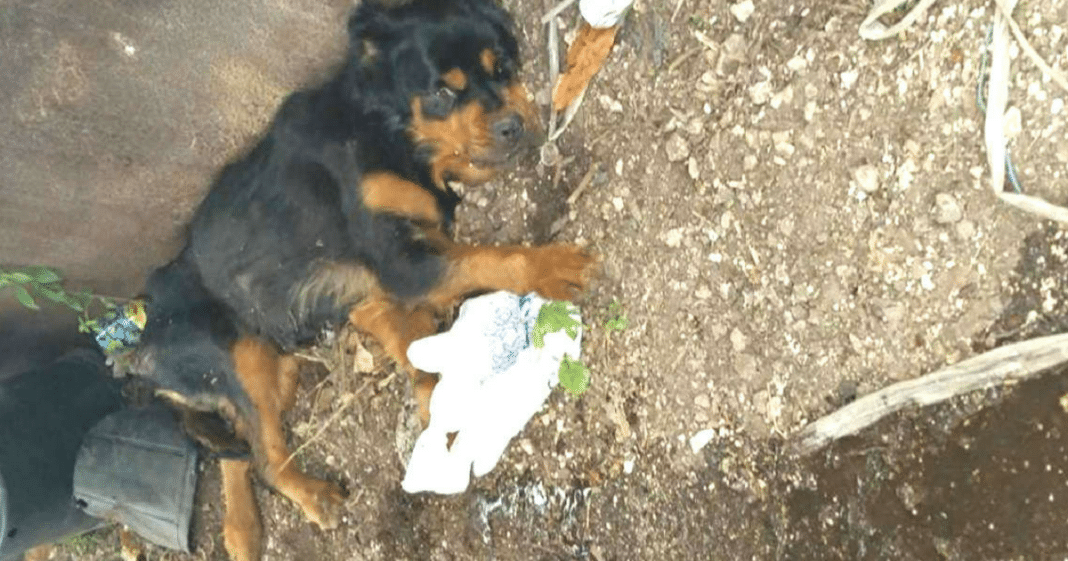 The rottweiler huddled beside the dumpster in a notorious dumping ground in Florida. She was malnourished and weak. Her spirit was broken. Her hope diminished. Fleas and ticks ate at her flesh. The creature couldn’t lift her head. she remained still. Would anyone find poor little Susanna before it was too late?

Isabel Zapata is an animal rescuer. She regularly checks this area for abandoned animals. She found an exhausted Susanna. She called Gulfstream Guardian Angels Rottweiler Rescue who didn’t hesitate to take her in. 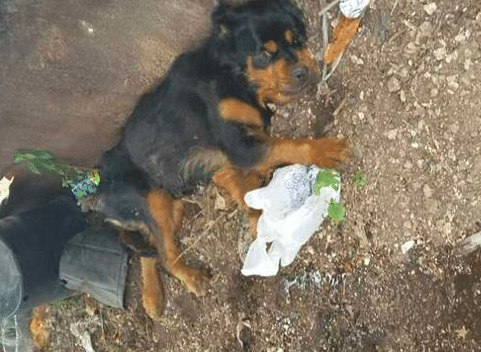 “Animals are just routinely dumped out there to die,” Laurie Kardon, a board member for the rescue, told The Dodo. “It’s a very dangerous place because there are a lot of trucks going through there at high speeds. It’s just heartbreaking. So many don’t make it.”

The pooch couldn’t walk. Her rescuers lifted her onto a tarp to transport her to a truck. Susanna had a long recovery ahead of her, but now she was at least safe. They rushed her to the nearest animal hospital where she was immediately put on fluids. Staff ran blood tests, and they learned Susanna was paralyzed. They weren’t sure of the cause or if the sweet girl would be able to ever walk again.

After they got her stabilized, Susanna was then taken to Clint Moore Animal Hospital in Boca Raton. It was here where staff finally figured out her past. She didn’t have spinal problems or broken bones. Her medical ailment was most likely caused by humans. 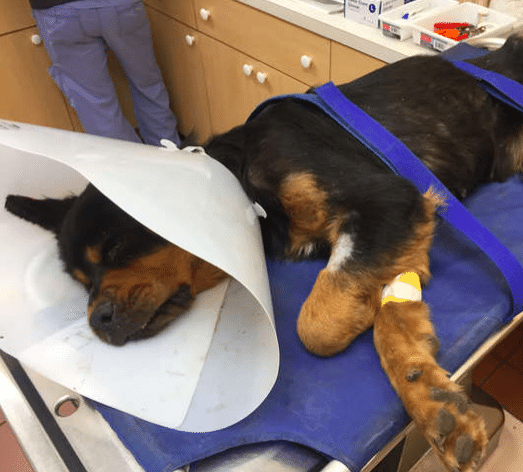 “She had some arthritis and physical deformities to her legs, which make us think she was just stuffed into a crate since puppyhood,” Kardon said. “She was likely in there most of her life and used for breeding. And when breeders are done with dogs, they just dump them .”

The 3-year-old pooch had already been through so much in her short life. She wasn’t giving up on herself. “The first time I saw her, she lifted up her head and licked my face,” Kardon said. “I said, ‘There it is. This girl wants to live. We were going to do everything in our power to get her going again.’” 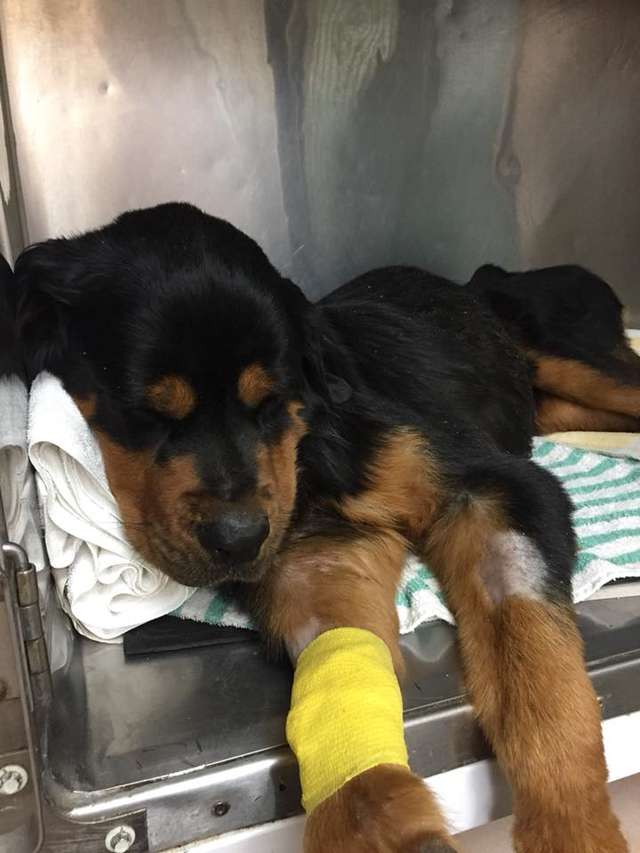 Susanna’s rescuers and vet staff created a health plan to help her recover. This included feeding her a rich quality diet to improve her weight. Next, she would be given physical therapy to make her stronger. They also put her on some pain medication to help her deal with the stiffness in her weak bones and muscles.

In just a week, Susanna gained so much strength; they tested her footing in a rehabilitation pool. She walked through the water.

“We were all in tears,” Kardon said. “It was such a relief.”

This sweet girl found her light and happiness again. They could see it in her eyes. Vet staff frequently took her to the pool to stretch and walk. Susanna wagged her tail at everyone she met. 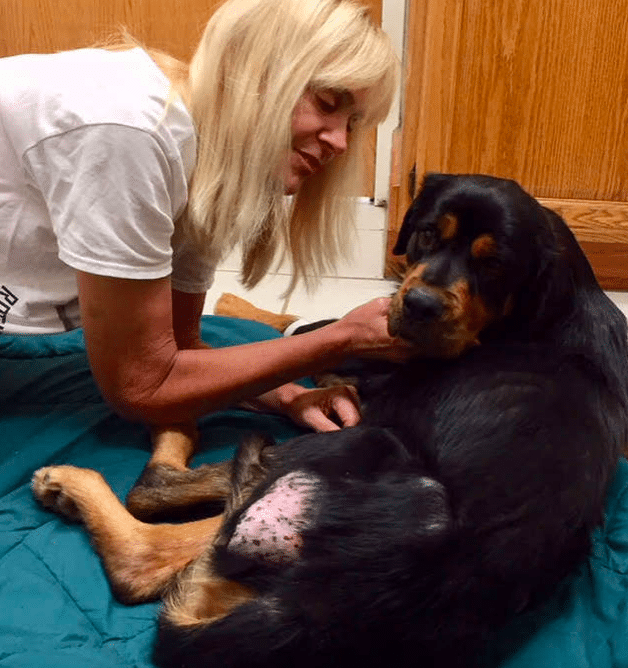 “She is just so happy,” Kardon said. “It’s probably for the first time in her life she’s felt this  way.”

It’s been a little more than a month since her rescue. With water therapy and laser treatments on her legs, Susanna is finally healthy enough to do some gentle playing with other dogs. She loves meeting and socializing with them all. This dear pooch also enjoys rolling around in the grass. Most dogs probably take this activity for granted. But for Susanna, she never learned the joy that could be found in doing this until her rescuers stepped in and saved her.

“She’s really a testament to her breed,” Kardon said. “She is strong, determined and brave, but also so sweet and loving. She’s got the heart of a Rottweiler, that’s for sure.” 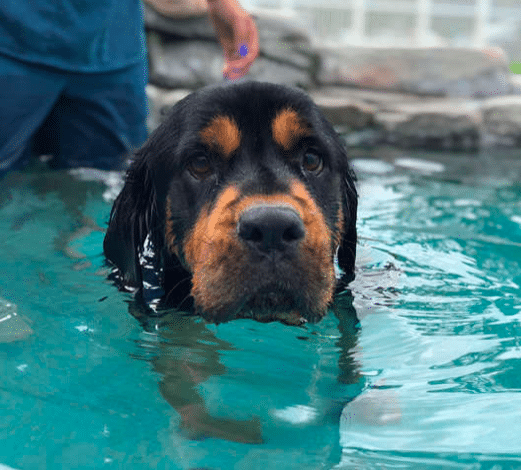 Until Susanna is ready to be adopted, the folk’s at the shelter will enjoy her bright spirit and the happiness she brings where ever she goes. Live on, Susanna! Play and have fun all you like. You deserve it.