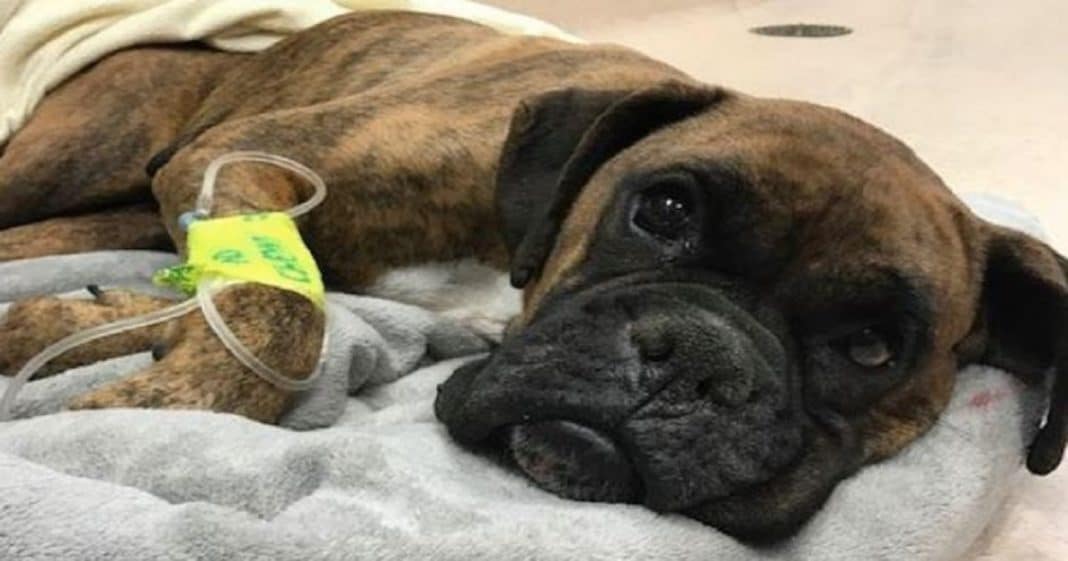 It’s estimated by the Humane Society of the United States, (HSUS), that there are 10,000 puppy mills in the U.S. with 167,000 dogs in captivity. These are female dogs. Most of them won’t get out alive.

The majority of puppy mills are regulated and licensed by the USDA. The USDA enforces the minimum of care regulations put forth by the Animal Welfare Act. These are the most basic requirements such as food water and shelter.

The dogs bred at these mills are sold at pet stores and through other retailers. Some mills fall under the radar, resulting in extremely sick and starving dogs. Dogs like a boxer named Tracy who was saved by a veterinarian in Pennsylvania from certain death.

Dawn Karam is the president of Adopt a Boxer Rescue. She first clapped eyes on Tracy, a 4-year-old boxer a few days before Christmas. Tracy was extremely thin, sick and very weak. Darn didn’t think she’d survive. The sweet girl nearly fell over when she attempted to walk.

Tracy was brought to a local vet by her Amish puppy mill owner because she was no longer getting pregnant: “He asked the vet if they could fix her up enough to be bred again, and if they couldn’t, the only  thing he’d pay for was to have her euthanized,” Dawn told The Dodo. “Greed is an awful thing, and this is all it was.”

Please help us give Tracy the Christmas miracle she needs!https://www.youcaring.com/adoptaboxerrescue-1051075Tracy is…

The vet knew Tracy wasn’t in any condition to have puppies. He knew she needed immediate medical attention. He called Adopt a Boxer, who agreed to cover any medical expenses.

Treacy was treated for pancreatitis, but within two days, showed no signs of improvement. The poor pooch was taken to an emergency vet clinic, but the cause of her illness remained unknown.

“Her chance of living seemed very grim,” Dawn said. “She wouldn’t eat, and all of her symptoms seemed to point to some neurological ailment, like a brain tumor, but the tests found nothing. The day before Christmas Eve, we knew we had to bring her to the only other people who  could give her more help.”

Where did volunteers take Tracy? To Ryan Veterinary Hospital at the University of  Pennsylvania. After a few more tests, the vets concluded she suffered from one thing: starvation.

“Every bit of her imbalance, every bit of her condition was because she was locked in a cage on that mill and deprived of the simplest thing that any pet needs,” Dawn said. “She was only 37  pounds — a female boxer is supposed to be at least 20 pounds more than that.”

A feeding tube helped improve Tracy’s outlook. The tube was removed when the dog began eating small, frequent meals. After four days of this routine, Tracy was well enough to be moved into a foster home. She was placed with an experienced volunteer from Adopt a Boxer.

“She’s been with her foster, Rachael Hubbard, for only a week now but it is like night and day,”  Dawn said. “She is comfortable, eating well and has already gained back 10 pounds.”

Remember Tracy, the Amish puppy mill momma who after the breeder found out she couldn’t have puppies said he would pay no more care than to euthanize this poor soul, and the brave veterinarian who stepped up to save her? Your outpouring of thoughts and prayers were INCREDIBLE, and we have an update. On arrival at the previous vet hospital in Lancaster County, The Amish famer had reported that it had been about 7-10 days since Tracy had last eaten. The vet thought it may have been Pancreatitis, and began treatment. After days of no improvement, we made the decision to transfer her to an animal hospital that had 24×7 care and observation. Since moving her on Tuesday evening, Tracy has not progressed. AABR consulted with her current vet, and made the decision to have a feeding tube inserted because Tracy is not eating on her own. She is still incredibly weak, cannot stand without support and still seems so defeated and lethargic. It breaks our hearts to think that someone could ever neglect an animal to this degree and feel no remorse, but that’s exactly how these Amish breeders operate. How can she be thrown away so easily? Once he heard she could no longer make him money, she became a disposable asset.While we are unsure of her prognosis at this time, Tracy is stable but not doing well. Thus far, the talented team at the veterinary emergency hospital that has been caring for her have been unable to pinpoint the source of her issues, and so we’ve decided to advance her to the University of Pennsylvania animal hospital for further care and testing. Adopt a Boxer Rescue turns no boxers away, and our only goal is to give them the life they deserve no matter how old, sick or destitute. Tracy needs us, but more importantly, she needs YOU! Please share her story to help make known the injustice dogs like her continue to suffer. It’s only through your collective voices that we can grow strong enough to overcome the scourge of commercial and abusive breeding programs!Please donate to Tracy’s care at https://www.adoptaboxerrescue.com/donate/Tracy has been moved to the University Of Pa specialty hospital. They do not know what is causing all her symptoms. While they are running tests she is being feed through a feeding tube and is getting lots of attention and love from the critical care nurses!!Please donate to help her.We are not taking applications at this time.

At her new home, Tracy is receiving plenty of TLC; she’s hanging out with four other boxer buddies. One fellow rescue dog is Angus. The new environment was first scary for Tracy, but she’s grown more confident each day, comforted by her new siblings.

“The only socialization she got was when the owners would go into her cage to take the puppies out to take photos of them for their sales posts,” Dawn said. “Mill dogs live for other dogs because that’s all they know —  so she’s definitely learning how to be a dog through watching what the others do and how they react to things. If they’re OK, then she’s OK too.”

Of the dogs unlucky to be rescued from puppy mills, dawn says: “Most mill moms and mill dads will not make it out alive.

“Although she was in poor shape by the time she got help, she’s one of the lucky ones.”

One ray of hope we can take from this story is that Tracy is gaining strength each day. The Pennsylvania SPCA has opened an active investigation into the puppy mill she came from.

If you’re disgusted by the deplorable and unacceptable conditions of puppy mills and the helpless dogs in captivity, you might be wondering how you can help. Dawn offers these words: “If people didn’t buy puppies from pet stores or online, there would be no demand, and there would be no mill dads or mill moms like Tracy.

Tracy asked us to pass along her thanks to all of her supporters. Her foster mom reports that Tracy is devouring three…

“The Millers continue to do this because they can — but we can stop this. In the meantime, giving these dogs the best life is the  best revenge.”

Dawn’s right; but rescuing these abused dogs takes money. You can help save them by donating to Adopt a Boxer or another dog rescue group; you can give funds to assist those organizations charged with investigating puppy mills too. You can also support your local ASPCA or HSUS organizations.

Won’t it be awesome when no dog needs to be rescued and no puppy mills need to be shut down? If we all stand up and speak out and do our part, whatever that might be, it will happen.