No One Understands Why Dad Still Gives Flowers To Ex-Wife, Then He Reveals Incredible Reason Why

If we lived in a perfect world, there wouldn’t be divorce, death, murder or violence. Sadly, couples separate; loved ones die, and viciousness and homicide are too commonplace. Couples don’t go into a marriage with the belief it won’t last. Many want to bring children into the world and raise them with upright values so they might become upstanding and kind individuals.

Too often though, around 50% of marriages don’t last. For many reasons, couples become distant emotionally; illness can affect a relationship. Unfortunately, children can become caught between the feuding parents. That is the worst part of this outcome.

Billy Flynn is a father; he and his ex-wife divorced. Billy didn’t want their children to become embroiled in the tensions between him and his ex.

Granted, Billy’s solution won’t work for every couple. Each person in a breakup has the right to feel the hurt, anger, and pain that comes with the dissolution of a relationship. It’s not impossible to see where Billy’s coming from with his post that’s sweeping the internet. Despite the ending of his relationship, he’s trying to have a good attitude about it. 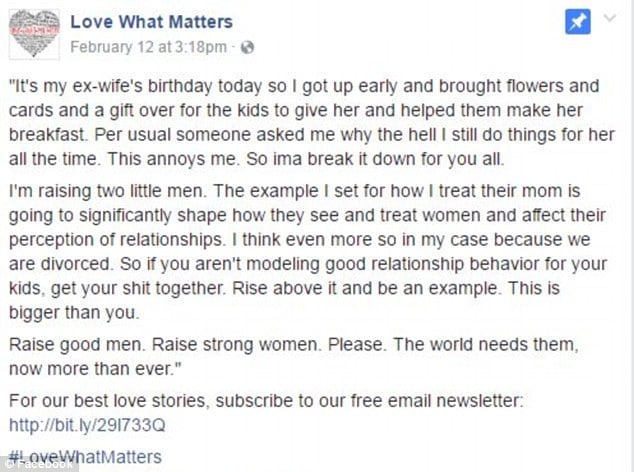 “It’s my ex-wife’s birthday today, so I got up early and brought flowers and cards and a gift over for the kids to give her and helped them make her breakfast. Per usual someone asked me why the hell I still do things for her all the time. This annoys me. So ima break it down for you all.

“I’m raising two little men. The example I set for how I treat their mom is going to significantly shape how they see and treat women and affect their perception of relationships. I think even more so in my case because we are divorced. So if you aren’t modeling good relationship behavior for your kids, get your shit together. Rise above it and be an example. This is bigger than you.

Right on, Billy. There’s an old saying I remember from my childhood: ‘Do as I say not as I do.”

You can look at this statement in two ways. This can be a crappy, flimsy excuse for people to use that can allow them to weasel out of taking responsibility for their actions. Or like Billy, you could use your words and actions as Billy’s doing to drive his point home.

Children are more observant than some adults believe. They see, hear, and understand everything. This can be a good lesson for taking responsibility for children, not just during the hard times, but all the time.