Mysterious giant cross washes up on beach after woman’s prayer 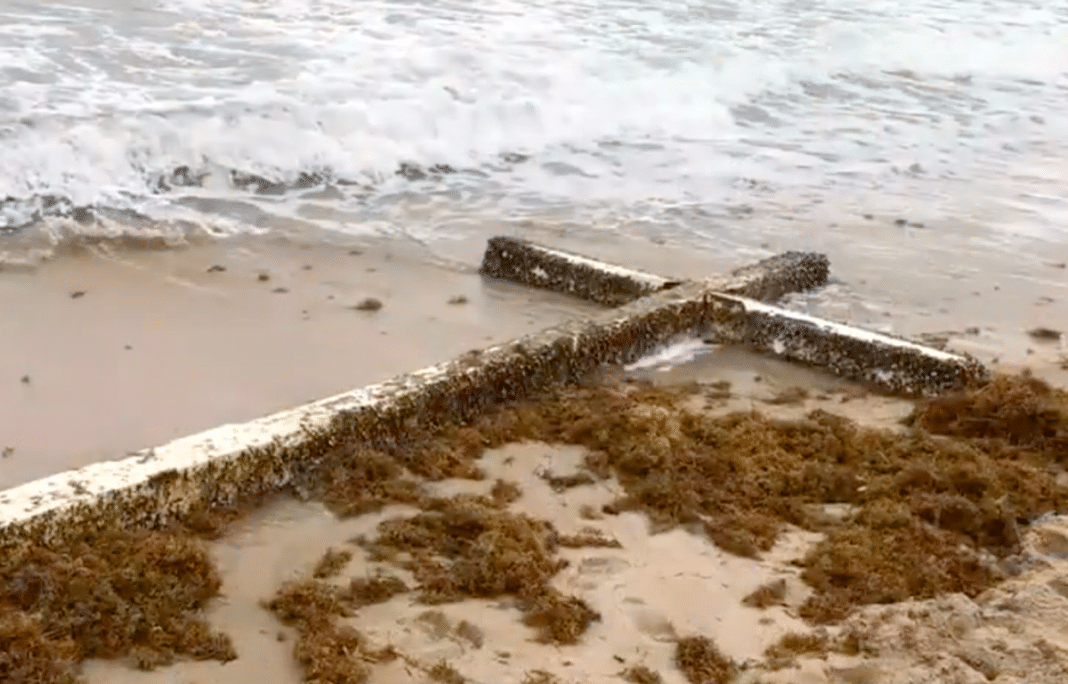 A resort in Fort Lauderdale has become a holy site of sorts after visitors found a giant 20-foot wooden cross washed up on the nearby beach. Now visitors are waiting in line for as long as two days to see the barnacle-encrusted cross, and the mystery of where it came from may have just been solved.

The Ocean Manor Beach Resort is the current home of the giant cross. It washed up in front of the resort over the weekend on Saturday evening. The resort posted pictures of the religious symbol on February 4, drawing curious viewers and the local news crew.

Now the resort’s Facebook page says visitors are waiting for days just to take a picture next to the cross.

People have been waiting in lines for two days to see the cross!

A man from Michigan described what he saw as the cross emerged from the ocean.

“We stood there and just stared at it and each other for quite a few minutes in awe,” Greg Gay said. “We had noticed all the barnacles and knew it had been in the ocean for quite a while, so why would the sea finally cough it up at just that moment if it wasn’t meant for us to find it?”

Immediately, people started speculating about the cross’s origins. Some thought it may have come from Puerto Rico, swept to sea after Hurrican Michael in October 2018. Others suggested it may have washed up from the Florida Keys.

The owner of the Ocean Manor Beach Resort, Frank Telerico, considered the cross of a sign of protection. He told the local news that his sister had been praying at the site the morning that the cross washed up on shore. It took seven people and four ATV vehicles to move the cross up from the surf to a spot near the resort.

Telerico said his sister had a bad dream and came to the beach to pray. According to his account, she said:

“You know what it’s not that big a deal. I just had a bad dream and a bad feeling so I wanted to come here and pray,” he said.

Hours later, the cross emerged in the waves. Now the resort owner says the cross has found a new home.

“You know what? I’m glad it’s here. It’s staying here, and if anybody wants to come see or take a picture with it, they are more than welcome,” he said.

Meanwhile, a new report from the Lakeland, Florida Ledger seems to have solved the mystery of the giant cross. Robin Stowe called the Miami Herald.

“The cross, Stowe said, was erected as a memorial to her brother, Capt. Richard Baran, who disappeared while on a solo hunting trip in the Hatteras Inlet in North Carolina in January 2016. The Coast Guard suspended its search after covering 33 miles over eight hours.”

After Capt. Baran disappeared, a group put the cross on display in April 2016 at Dredge Island near the location where his boat was found. Stowe suspects that Hurrican Nate must have swept the cross out to sea in October 2017.

A charter boat captain who was Baran’s business partner and friend, Aaron, says he recognizes the cross as his handiwork and would like to bring it back to North Carolina. He says he made the cross in just an hour and erected it in honor of his missing friend.

“The reason I know it is [the cross] is I built it and notched it and can see the eye bolts and that it’s set off to one side,” Aaron said. “It’s the cross — 100 percent.”

“We would love to see the cross come back to Hatteras. We set it up as a memorial. It was such a big ordeal when we never found him and he died at sea and that’s why this is so important,” Aaron said.

It remains to be seen where the cross will find a permanent home. Will it stay where it washed ashore or head back to North Carolina to honor Capt. Richard Baran?