Mom Takes Dying Son To See Santa, Then Finds Note On Car That Leaves Her In Tears 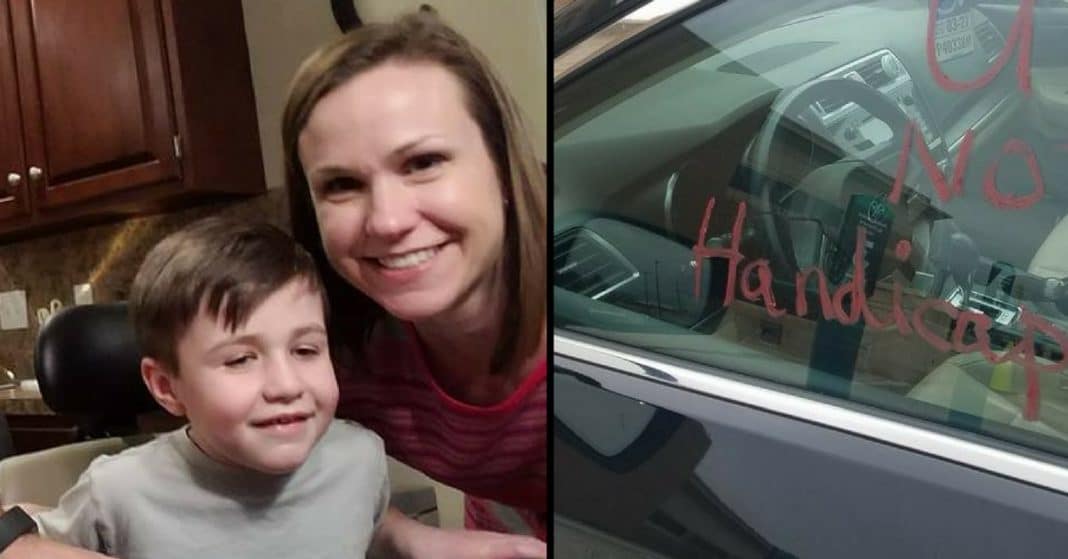 I have fond childhood memories of visiting Santa at the local mall. Sitting and chatting with the kind man with the long beard always made me smile. I got my picture taken with him too, along with a reminder to behave or I’d only receive coal in my stocking.

Santa made me feel so very special – like I was the only child with a mile-long Christmas list. I had complete and utter faith in the man from the North Pole. After all, he was Santa Clause. He was invincible and unstoppable. Nothing would prevent him from delivering my desired presents on Christmas Eve.

Like most 7-year-old boys, Garrett Coynes loves going to see Santa. His family has made it a yearly tradition.

This year, though, one grinch tried to ruin his family’s holiday spirit.

When Garrett was three, he was diagnosed with Batten disease, a neurological and degenerative illness. Garrett is slowly losing his motor skills. His speech is declining and he relies on a wheelchair to get around. There is no cure for this illness. Sadly, it usually ends with childhood death.

Garrett’s mother, Nancy, wants to give her son as many moments of joy as she can. Seeing Santa does this for him, so she happily takes Garrett to see him.

This particular day, she parked their vehicle in a handicapped spot and then took Garrett inside.

Their visit with Santa was fun and memorable, but when they returned to their car, Nancy found a nasty note scrawled in red lipstick on her window:

Nancy was appalled. She couldn’t believe someone would have the audacity to write something so nasty when they had absolutely no idea what daily life is like for her and her family.

Nancy wasn’t parked illegally – she had the required sticker notifying security and anyone else who might have an issue with her parking that she indeed has every right to utilize the handicapped spots. This made the person’s rude note even more confusing.

“I can’t believe someone could be so obnoxious and ignorant and rude about a situation that I struggle with daily,” Nancy said.

The mall where this incident took place has also spoken out. They said they are extremely offended by what happened and are working closely with the local police in their investigation.

While the Coynes family was angered by this person’s actions, after having time to cool off they said they just hope the rude stranger realizes their ignorance.

The family has done much to help educate the public about Batten disease. After Garrett’s diagnosis, they started a non-profit in his name and have raised over $100,000 for research to help other children living with this horrible disease.

Despite the negativity of ignorant strangers, Garrett’s family is determined to give him the best life they can and to keep his spirits high.

“You just have to do the best you can and always move forward,” his dad, Joe, said. “You have to look at it all and say, ‘Let’s just live.’”

Are you appalled by the nasty note this person left on Nancy’s car? So share this!