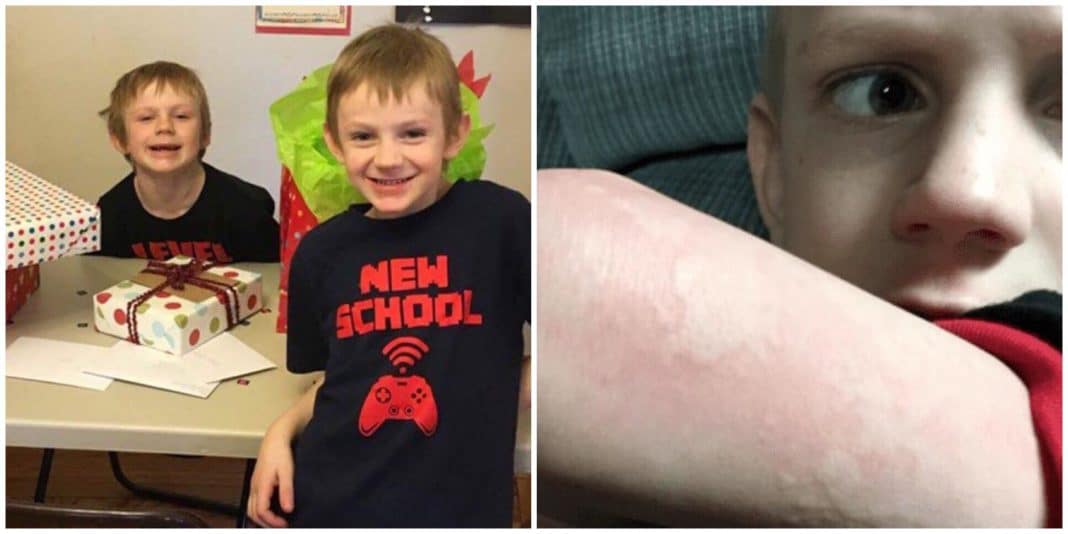 With the flu crippling the country’s hospital emergency rooms, it’s understandable why some parents might be paranoid when it comes to the health of their children. Especially for those who have not received the vaccine, it can be concerning when your child complains of not feeling well.

Schools have lost entire days because of the virus infecting staff and students. And tragically, 16 children have succumbed to the flu and died. We’re not yet done seeing the ravages of this illness.

It’s important to know the signs and symptoms of the flu, but for one Nebraska mother, she is warning others that just one indicator can signal influenza.

Brodi Willard’s son, Seb is your usual healthy 6-year-old little boy. Last week Seb came home from school with a rash on his neck. Brodi tried getting rid of it with home remedies, but nothing worked. The hives spread all over her son’s body. Brodi took him to the E.R. and he was diagnosed with influenza.

“This is a healthy kid who has never had hives, never had anything wrong with him. Then all of a sudden he has hives,” Willard, of Blair, Nebraska, tells PEOPLE. “He got his flu shot in October …  but I brought him in on Friday morning, and he tested positive.”

Hives aren’t one of the symptoms usually associated with the flu. What people know to look for are things like fever, sore throat, cough, headaches, runny nose, and fatigue. The CDC however, does list hives with a fever as an emergency symptom of influenza for children.

Seb’s mother was concerned because the hives were the only indication of the virus her son exhibited: “He’s never had a runny nose, no cough, no fever. He’s never had any other symptoms,” she says. “We immediately started him on the Tamiflu that Friday night … The hives went away on Sunday, and that was it.”

“I can say that hives are not commonly associated with influenza and may represent a second, unrelated process,” Dr. Tosh tells PEOPLE. “However this being a very rare manifestation of influenza infection is certainly in the realm of the possible.”

Brodi took a photo of Seb’s hives and posted it to facebook along with this warning to other parents: “Please keep watch on your children so if they develop hives, please call your pediatrician,” she wrote. “I have never heard of this symptom, but it is obviously something to be on the lookout for.”

She added as another precaution: “Of course, you could have other things going on, but it’s one thing to think about. If your kid does develop hives, it could be the flu.”

If it’s not one thing, it’s another. I’m certain you might have had that fleeting thought while reading Brodi and Seb’s story. With this virus so rampant and no close to ending its vile nastiness anytime soon, we need to look after ourselves and each other. I’m glad Seb has made a full recovery. Other children haven’t been so lucky.