Mom And Son Trapped In Car Panic As Flood Waters Rise. Then She Looks Up, Sees Familiar Face 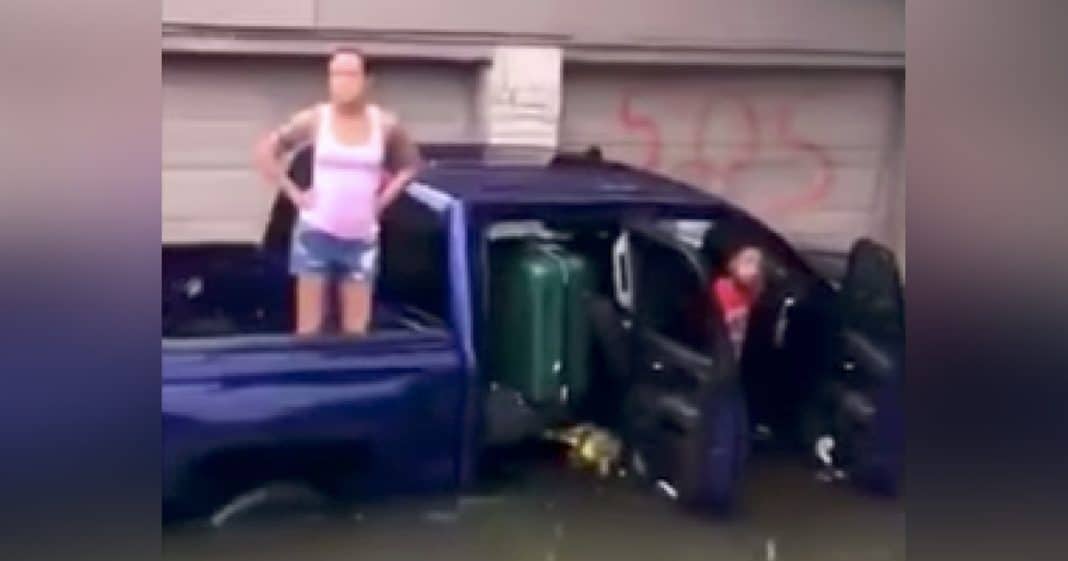 Karen Brown was so busy helping others during Hurricane Harvey that she didn’t focus on her own home that was flooding. When Brown, a dispatcher for the local police, got home, she realized she and her son needed some rescuing of their own.

By the time Brown got home, water was already flooding the house. The structure of the house had also begun to take a direct hit from the water and the roof was starting to cave in.

Brown took her 6-year-old son outside and wrote “SOS” on their garage door. She tried calling 911 for help, but the lines were so tied up during the disaster that the call was unsuccessful.

Next, Brown did what many would do in such a situation – she called her sister.

Sherina, Brown’s sister, lived over an hour away, but that didn’t stop her from sending her husband, Cameron, and his friend, Josh, to the rescue.

When Cameron and Josh arrived in a boat, Brown and her son were waiting in their blue truck. With the possibility of the house collapsing, it was safer to be outside and standing in the truck than inside.

As they drove the boat up to the residence, Cameron yelled out to his sister-in-law, “I told you we were coming!” Then, after seeing the damage, commented in disbelief, “It’s worse than I thought.”

In a video of the rescue, the Browns climb on board the boat as Cameron jokes, “All right, where do y’all want to go eat?” After the harrowing day, Brown was able to take a moment to laugh as they drove away to safer and higher ground.

This is one of many stories of people helping others in the aftermath of Hurricane Harvey. In many cases, it’s strangers helping strangers; but in this case, it’s family helping family.

Thanks to Cameron and Josh, this family is safe – and they’ll have a great story to tell when it’s all over!

Have you been touched by the way so many have stepped up to help those in need during this terrible storm? So share this!