Mom Panics When Baby Born ‘Blue And Floppy.’ Doctor Knows She Only Has Minutes To Save Him 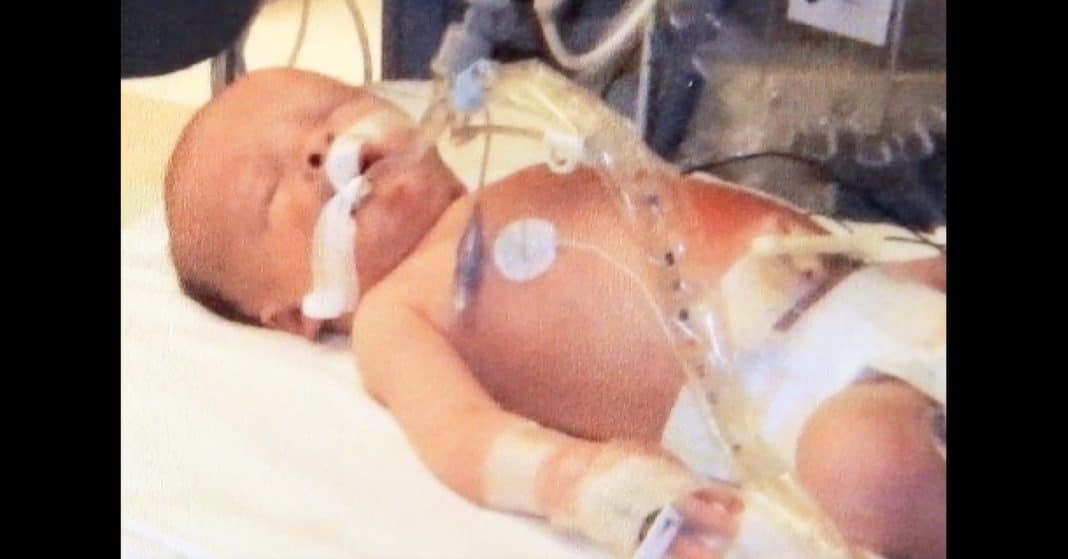 All births are traumatic. The woman suffers nine months of unfamiliar changes to her body, some of which cause discomfort and pain. The moment of truth is when the baby’s head crowns and they fall into a waiting person’s hands.

What most expectant parents anticipate is hearing the first cries of their newborn child. This signifies health and their arrival.

When a baby’s wail isn’t heard, alarm strikes in the hearts of all present. And when a baby comes out blue? Doctors know they must act fast to save this precious new life.

When little Thomas Richards was born at St. Joseph’s Children’s Hospital in Marshfield, Wisconsin, he was silent and blue. His sweet eyes were open and his body was limp.

Thomas’ parents, Jessica and Corey Richards, would soon learn their son was one of less than 200 children born without a trachea.

Most of us have two pipes in our throats – one sends food to the stomach (the esophagus) while the other carries air to the lungs (the trachea).

With the absence of a trachea, baby Thomas couldn’t draw a breath. Without medical intervention, he had mere minutes to live.

Up to this point, only five children born without a trachea had ever survived, and none in the United States. These five were fortunate because they went under the knife immediately after birth.

With the help of a group of nurses, Dr. Jennifer Delaney placed a bag-shaped mask over Thomas’ mouth to try and force air into his lungs. His complexion started to turn a little pink, which meant the mask was helping. Some air was able to circulate in his bloodstream because of the abnormal connection with his esophagus and lungs.

Because a breathing tube couldn’t be inserted normally, the surgical team had to improvise a way to get the breathing tube down his esophagus. They clamped it just above his stomach where they then inserted a feeding tube.

This was a temporary fix. Thomas could breathe, but this couldn’t be a permanent way for him to live.

Dr. Delaney quickly had Thomas transferred to Children’s Hospital of Wisconsin where Dr. John Densmore oversaw a complicated and complex 30-step procedure that would provide a more permanent fix. In simple terms, Thomas’ stomach was shifted behind his left lung and sewn to his esophagus.

Thomas was the first American baby to survive being born without a trachea.

“We started this conversation with: I don’t know that your baby can be saved,” Densmore recalled. “And to sit here, 17 months later, with a kid who is part of this world and interacting… I mean, it’s pretty amazing.”

Amazing indeed. Thanks to the quick thinking and actions of this incredible medical staff, Thomas is alive and healthy today.

Were you amazed by Thomas’ miraculous birth and survival story? So share this!