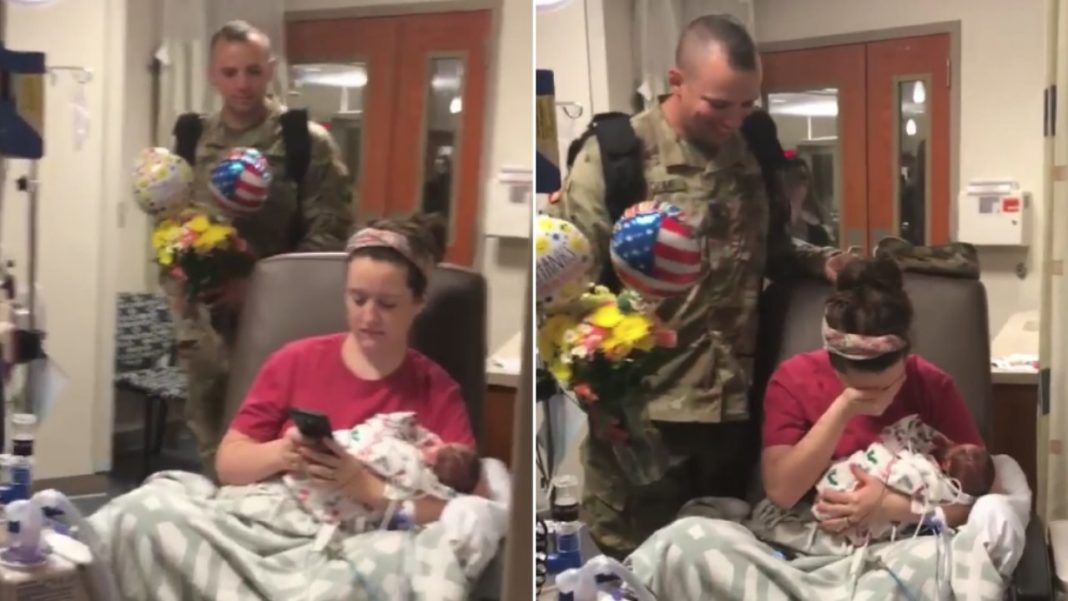 Mother of two, Cydney Cooper was pregnant with twins, but her husband was stationed overseas in Kuwait with the U.S. Army. He had been deployed for a year and sadly wouldn’t make it home to see the birth. Cooper would have to go it alone but wished so badly that Skyler could be there with her in Kansas.

In September 2018, Cooper found out the gender of the twins and wanted to share the news in a special way with her husband. She reached out to Skyler’s friend on the military base and discovered “they already had something planned!” Two of Skyler’s buddies came up with the perfect creative way to reveal the gender of the twins to him with a game. (See the video below)

We have news!!!I messaged the guys about a month ago to see if maybe there was something we could do for Skyler over there when we found out genders. However, they already had something planned! Thank you so much to Aaron Kerth and Andrew Eicholtz for their idea and to Dale Fulzenloger for sending me this video! Kyla Jo and Emma Rae are lucky ladies to be celebrated here AND all the way across the world ❤❤??

As you can see in the video posted to Cooper’s Facebook page, Skyler hits the balls to reveal two puffs of pink smoke. In addition to his two sons, he learns he is going to be the proud father of twin girls, much to his surprise.

Then Cooper faced an unexpected health issue that meant the girls would be arriving sooner than expected. She came down with the flu, and doctors decided it would be best to deliver the babies prematurely at 33 weeks. She headed to the hospital and the twins entered the world on January 24.

The premies spent 12 days in the NICU and their mom recovered and rested as best she could as family and friends offered her “tons of help.” She could only see Skyler on the screen via Skype and that would have to suffice, or so she thought.

The early birth of the twins was a surprise, but then Cooper got an even bigger surprise and on February 5. She was looking at her phone and totally caught off guard. As she turned her attention to one of the twins in the hospital bed, a family member in on the surprise caught it all on camera. 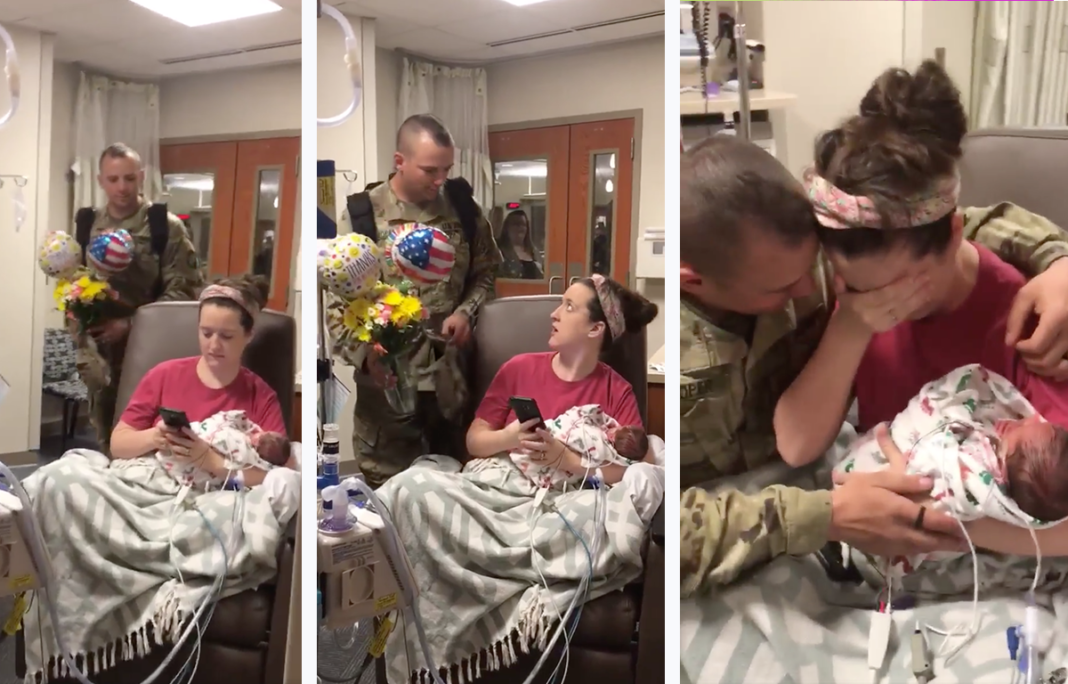 Cooper was in so much shock she couldn’t comprehend what was really happening at first. Was it really her husband standing above her?

She posted the video to her page with the caption:

“1 year of crazy, 1000s of miles, 1 solo pregnancy and delivery, 48392 Skype calls, some superheros, a few plane rides, 12 NICU days, tons of help from family and friends, and many tears later….
A soldier came home ❤???
(I promise I hugged him–that is just me realizing everything is finally okay ❤)”

Having her loving husband back with her meant everything. Cooper breaks down in tears of disbelief and joy as they share a tender embrace and kiss.

According to CBS News, life couldn’t be looking better for the parents:

“She said Wednesday she is still in the NICU with the girls, but that they are doing great. Skyler may have missed their births but he’s home for good now, she said.”

In another video, Skyler surprises his two sons as he steps into the couple’s home for the first time. One family member is just as surprised as the boys. In another video, the family dog couldn’t be more excited to see Skyler, wiggling all over from head to toe and leaping for joy into his arms.

These are beautiful moments of pure joy and love and we thank the family for allowing us to share in the joy with them. In addition, thanks to Skyler for his service.

So far the videos have reached over 20 thousand shares and counting. We wish them the best as they begin a new chapter of their lives together.