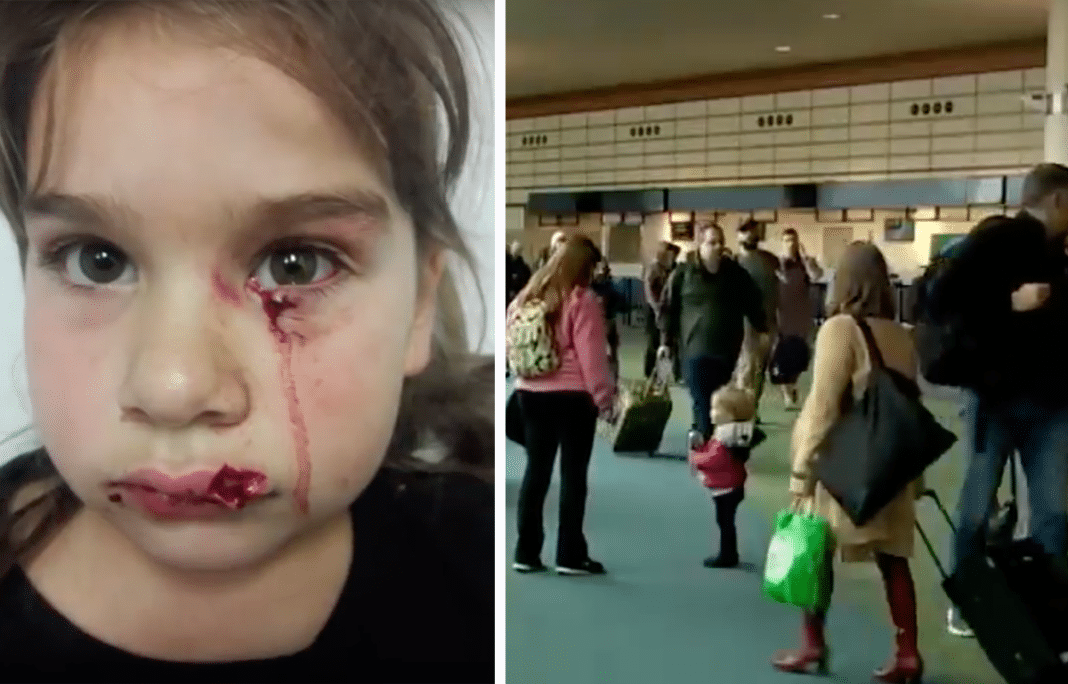 A 5-year-old girl named Gabriella Gonzalez was mauled in the face by a Pitbull on a leash at the Portland International Airport. Now the girl’s mother is filing a lawsuit for over a million dollars against Alaska airlines, the airport, and the dog owner.

The suit is seeking $100,000 in damages for Gabriella’s past and future medical expenses and another $1 million for pain and suffering.

The dog’s owner presented a letter that she needed her “emotional support animal,” but court documents claim the dog “was not a trained and registered service animal.”

The mother of a young girl who was allegedly mauled by a pit bull at Portland International Airport has filed a $1.1 million lawsuit against the dog's owner and Alaska Airlines. https://t.co/1LN1a5pDoE

Marna Gonzalez filed the lawsuit on Monday alleging that the pit bull attacked her daughter inside the airport on Dec. 18, 2017.

“There was just blood everywhere,” said Gonzalez, adding that seeing her daughter’s injuries was “horrifying.”

According to Gonzalez, she and her family were waiting at the gate to board a flight to Texas for Christmas at the time. Her daughter asked the dog’s owner, Michelle Brannan, if she could pet the dog, and was given permission. Then the dog attacked.

The little girl required facial reconstruction surgery at the hospital.

The lawsuit alleges that Brannan “should have known that taking her pit bull to the airport created an unreasonable risk of harm to the public.” It also alleges that the airport and airline were responsible for allowing Brannan to keep a “dangerous” animal unsecured in the airport.

The airlines are caught in a tight spot. They want passengers to be comfortable and safe but are seeing a growing number of cases where suspect animals without proper training and registration are presented as service animals.

One particularly shocking case involved a woman who tried to present an enormous peacock named Dexter as an emotional support animal.

This peacock named Dexter tried to get on a plane as an "emotional support animal," and United Airlines told him that would not fly pic.twitter.com/7NR6MhnWZI

Passengers presenting animals as emotional support animals must present letters describing the purpose of the support animal, they type of support the animal provides, as well as the patient diagnosis. KDKA-TV notes that many passengers get the letter from a doctor, but others can get a letter by going online and merely paying a fee.

“If people without legitimate mental health issues are making use of that system by basically faking sick then they are diminishing the structure of the whole system.”

See more from KDKA-TV below:

In response to the case in Portland, ABC News reports that several major airlines are “refining their rules” about emotional support animals.

Delta Airlines banned all “pit bull-type” dogs in 2018 citing a report in which a passenger was bitten “by a 70-pound dog” during a flight. The dog was a Labrador mix, according to the Huffington Post.

It’s a little vague what a “pit bull type” dog may be, but could include American pit bull terriers, Staffordshire terrier and bull terrier, and dogs that resemble those breeds. Consequently, even if people have a legitimately trained and registered service dog that fits this loose description, they would face the same ban.

“The new policy could make life more difficult for people with disabilities who may rely on a service dog that resembles a pit bull in order to fully participate in everyday life.”

Animal rights organizations like the ASPCA say the ban reinforces negative stereotypes, but the Air Carrier Access Act, or ACAA, allows airports to prohibit service animals that “pose a threat to the health or safety of other passengers or that may cause a disruption in cabin service.” They don’t have to make a distinction between service animals governed by the Americans with Disabilities Act (ADA) or emotional support animals, which are not defined as service animals under the ADA.

Thanks to people abusing the system, Delta was forced to make a list of other animals that would be banned, including hedgehogs, ferrets, insects, rodents, snakes, spiders, sugar gliders, reptiles, amphibians, goats, poultry, and animals with tusks, horns, or hooves.

As a side note, we have covered a very important story about a woman with a trained service animal who wants to send an important message to the public. It’s important to respect all service animals and give them the room they need to protect and serve their handlers without distraction. Although kids are drawn to them, it’s important to teach them that these highly-trained animals should not be disturbed as it can be a dangerous situation for handlers.

We hope the airports can make common-sense decisions to ensure emotional support animals are legitimately trained, registered, and secured without hurting people who have serious health concerns and truly need help from trained support animals. People abusing the system by claiming their animals are properly trained and registered are making it much more difficult for everyone. Though they may not realize it, they are putting everyone in danger.