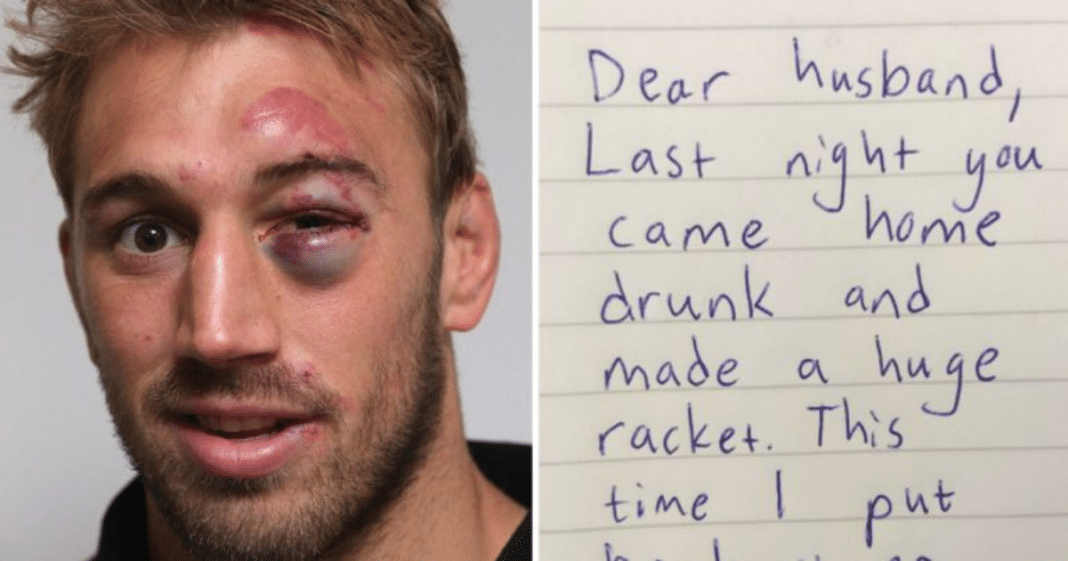 It’s never a good idea to consume too much alcohol. Whenever people drink too much, there’s a good chance that they’ll do or say something they’ll come to regret when they sober up.

And then there’s the other danger.

We could completely forget what we did or said.

However, often, the people we care about don’t forget.

This is the story of a married man who woke up with a hangover and “lost” memory of what he did the night before.

A man named Jack wakes up with a damaged face only remembering fragments of the previous night.

Jack was out the night before drinking with his boys. He doesn’t recall how he made it home from the party.

“Oh damn,” he curses to himself, wondering if he did something terrible the night before.

After Jack forces himself to open his eyes, he notices a couple of aspirins next to a glass of water on the nightstand.

He then sits up and also sees his clothing laid out in front of him, clean, and pressed.

Then he notices a small note hanging on the corner of the mirror. It’s written in red with little hearts on it and a kiss mark, from his wife’s lipstick.

“Dear husband, last night you came home drunk and made a huge racket. But don’t worry! Breakfast is on the stove. I left early to get groceries to make your favorite dinner tonight. I love you, darling!
Love, Jillian”

Jack stumbles into the kitchen and, sure enough, he finds a hot breakfast complete with steaming hot coffee, and the morning newspaper all waiting for him. His son’s also already at the table eating.

That’s when he learned the truth.

“Well, you came home after three in the morning, drunk and out of your mind. You fell over the coffee table and broke it, and then you threw up in the hallway, and got that black eye when you ran into the door.”

Confused, he asks his son, “So, why is your mother in such a good mood, and why is there breakfast on the table waiting for me?”

His son smiles and replies:

“Oh THAT! Well, when Mom dragged you to the bedroom, and tried to take your pants off, you screamed, ’Leave me alone, I’m married! I’m married!’”

Jack was so relieved that he started crying!