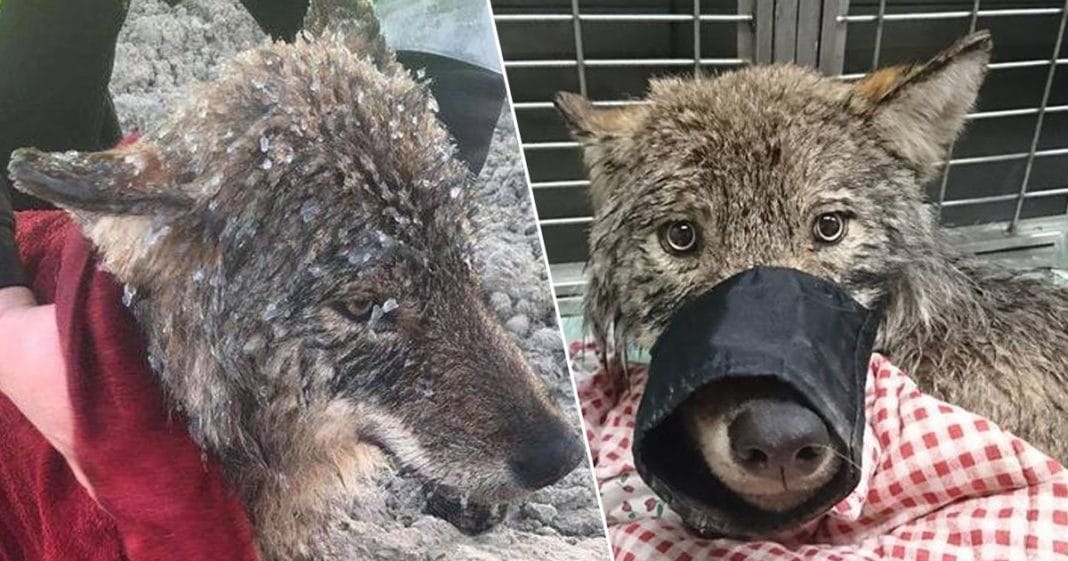 One day a couple of hard-working men from Estonia were working on the Sindi dam on the Pärnu river when they happened upon what first appeared to be a dog fighting for its life in the freezing water.

Without hesitation, the men immediately lept into action to save to pooch.

They cleared a path through the ice and rushed the animal to a local clinic for medical treatment.

It was there when they learned that they had just saved the life of a wolf.

The BBC reports, vets in the clinic were at first puzzled over the nature of the dog’s unusual pedigree.

It wasn’t until a local hunter confirmed that the “dog” they had under their care was actually a young male wolf, that they realized this wasn’t any ordinary rescue mission.

The Estonian Animal Protection Union posted to Facebook just after the rescue, describing how they plan to pay all the medical bills once the wolf reached the animal clinic.

They wrote (translated in English):

When we got to the shore, the poor wolf was very exhausted, hypothermic and frozen. Young men quickly ran into the car, brought a towel and dried the animal. Then he took him to a warm car and called the animal protection Union.

It was also a challenge for the union to think about what to do in the morning at 8 with a dog in [distress], who could also have been a wolf.

As for the men who rescued the wolf, Robin Sillamäe, Erki Väli, and Rando Kartsepp spoke to Estonian newspaper Postimees about the rescue explaining how they cleared a path through the ice to rescue the distressed wolf.

When they pulled the wolf from the river, it was stiff from the freezing water and had ice on its fur.

They explained how they wrapped it in a towel before putting it in a car to warm up.

“It was swimming on its own, we cleared a path for it through the ice. We had to carry him over the slope. He weighed a fair bit.”

Once the wolf was safely out of the water, the workers called animal rescue who told them to take it to the Terveks animal clinic in Pärnu.

The car ride was uneventful, with the wolf sleeping peacefully in the backseat.

After they arrived at the clinic, they were shortly informed by vets that the “dog” they just rescued was actually a wolf.

After the clinic learned they had a wolf, they decided to put it into a cage after treatment, just to be on the safe side.

Thankfully, the wolf was able to recover within a day and was soon released back into the wild after it was fitted with a GPS collar by researchers from the national environmental agency.

It’s beautiful to hear about such a courageous act of kindness toward an animal commonly vilified by society.

Those men are true heroes.