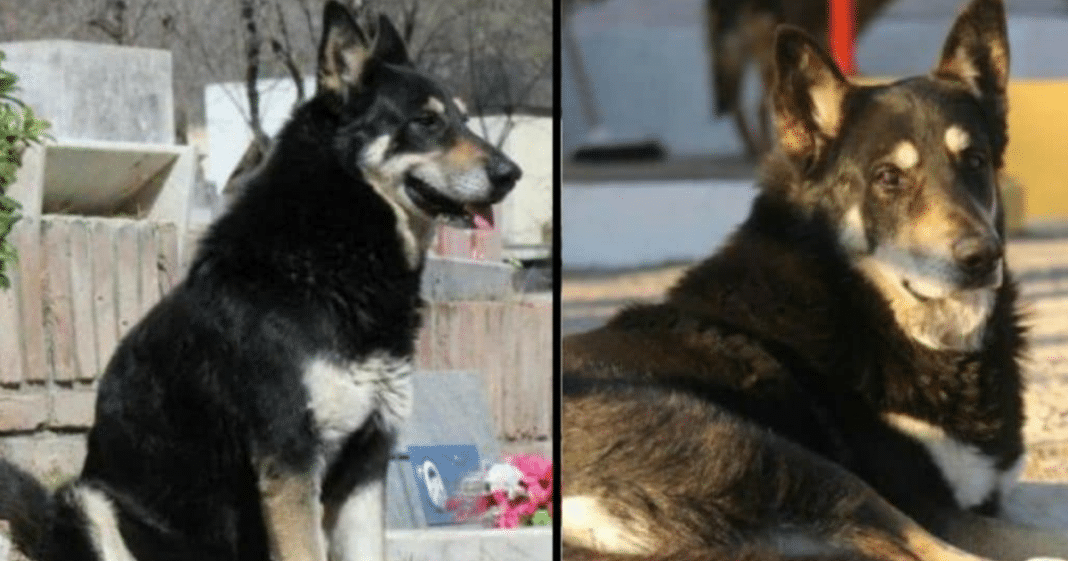 Dogs become familiar with our routines. They easily insert themselves into our lives, sometimes manipulating us to change how we do something all to accommodate them. They know how to get what they want from their humans. Whether it’s a sad look from those soulful big eyes, a wag of the tail or a nuzzle from their cold nose; they burrow their way into our hearts.

Despite our griping and moaning about how spoiled they are, our dogs become loyal, faithful companions. They know where their bread is buttered and they’re not likely to run away from that source of love and comfort.

The bond between some dogs and their humans is so solid; it will remain after death. Take this heartwarming story from Argentina. In 2005, a father, Miguel Guzman, purchased a dog, a 4-year-old black Alsatian named Capitan for his 13-year-old son, Damian. The following year, Mr. Guzman died.

Capitan ran away; he was discovered sitting beside the senior Guzman’s grave. Neighbors and cemetery staff fed the heartbroken pooch. The precious boy kept vigil over his master’s grave, sleeping beside it for the next decade.

Sweet Capitan has now found his eternal peace. He passed away at the graveside of Miguel Guzman.

When he first ran off, Damian would chase after Capitan, but the dog would always return to the cemetery. It wasn’t until 2007 when the family learned Capitan was sleeping beside Guzman’s grave.  Neighbors fed him and cared for him to allow him to remain there each night. The grieving pooch died a few days ago at the age of 15.

What’s so miraculous about this story is the family live some distance from the cemetery. When  Miguel died, Capitan didn’t accompany them to his funeral. Somehow, he knew where to go to find his master’s resting place.

Mr. Guzman’s widow Veronica reflected on the pet’s graveside vigil She told Argentina’s Cordoba newspaper six years ago: ‘We searched for him, but he had vanished. We thought he must have got run over and died.

‘The following Sunday we went to the cemetery and Damian recognized his pet. Capitan came up to us, barking and wailing as if he were crying.’

She added: ‘We had never taken him to the cemetery, so it is a mystery how he managed to find the place.

‘We went back the next Sunday, and he was there again. This time, he followed us home and spent a  bit of time with us, but then went back to the cemetery before it started getting dark.

‘I don’t think he wanted to leave Miguel on his own at night.’

Damian added: ‘I think he’s going to be there until he dies too. He’s looking after my dad.’

The cemetery’s director Hector Baccega said: ‘He turned up here one day, all on his own, and started wandering all around the cemetery until he eventually found the tomb of his master.

‘During the day he sometimes has a walk around the cemetery, but always rushes back to the grave. And every day, at six o’clock sharp, he lies down on top of the grave stays there all night.’

What an incredible dog. Even in death, Capitan refused to leave his master, protecting him until his own death.