Lifeless orchids? Here’s a secret trick that anyone with this plant needs to know 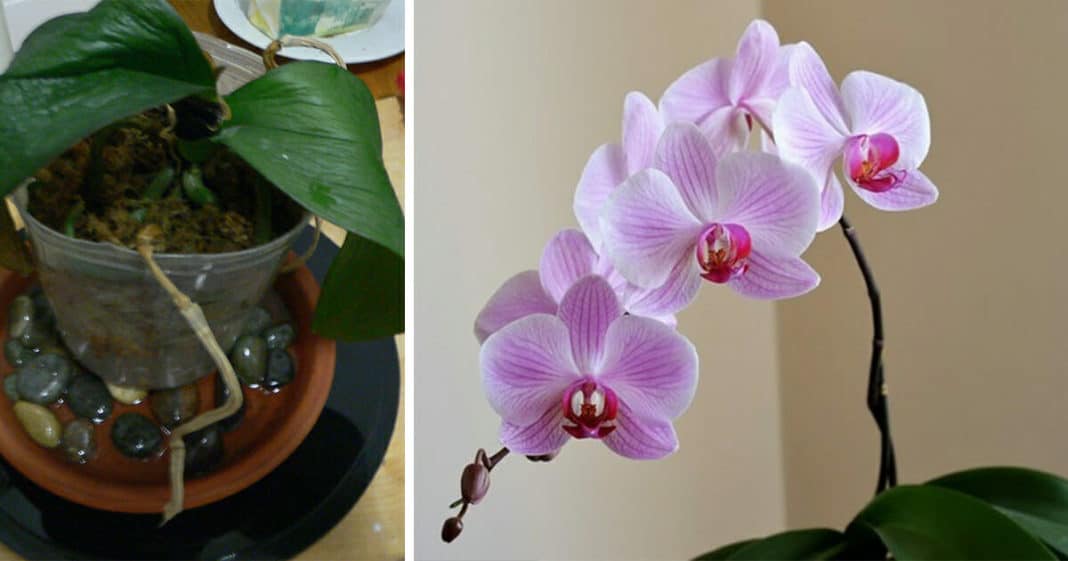 You’ve probably heard someone tell you that growing orchids is easy. “Just add an ice cube once a week, and that’s it,” they say. They would have you believe it’s foolproof, so you bring a beautiful Phalaenopsis orchid home from the store. The stunning spray of flowers lasts for months, and you think you’re officially a green thumb, but then it’s over, and it never seems to bloom again. You are left doubting your ability to grow plants, but what if there is an easy hack to get those flowers back?

One blog suggests they have hacked the orchid system.

“If you love your orchid and are not ready to throw it out, keep reading because there’s a way you can get your plant looking all pretty again.”

They’ve stumbled upon a new way to grow orchids, suggested by a Swedish hobbyist, Helen Nordvall.

“I have tried to read lots of tips during this time. I have watered from above, from below, with nutrition … I’ve tested everything, but none have worked. That’s why I was so happy when I finally found this solution,” she wrote in Swedish.

Nordvall hid her sad-looking orchids behind a curtain. She could never get them to bloom. Then one day, she decided to take them out and remove all the soil and bark from the roots. She rinsed them off and placed the plant in a clear vase “so that the sun could shine through” and filled the bottom of the vase with water, covering some of the roots. The plant received more light and got plenty of hydration.

#Dendrobiums
?Dendrobium is very popular because it's relatively easy to care, and also come in a wide variety of shapes and colors.? It produces impressive blossoms of any orchid with relatively minimal maintenance.?#orchids #plants #naturelove #freshorchids pic.twitter.com/nkb7QVlGZR

After just two weeks, Nordvall noticed new shoots growing on her orchids. A couple months later, the orchids were blooming like crazy again. From that day on, she grew all of her orchids that way, and it was truly easy. She would never have to throw away her plants again.

“Once a week she changes the water in the vases and rinses off the roots, otherwise they take care of themselves.”

She was thrilled that she could take her orchids out of hiding and wouldn’t have to end up throwing away dead plants.

“It feels very nice that I will never have to throw away any more [orchids].”

For more tips, we watched videos from an Orchid enthusiast called the “Orchid Whisperer.” (see the videos below)

She recommends using water with a low pH of 6.0 to 6.5. You may need to use either distilled or filtered water, depending on how the water comes from your tap. She has successfully grown Phalaenopsis orchids using the “water culture method” for many years.

“Orchids like water that’s pure, that’s slightly acidic, and that Is free from contaminants,” she says.

Keep in mind; this method may only work with “easy” orchids like Phalaenopsis or select Dendrobiums. These are the ones you’ll usually see offered at your local grocery store.

Winter is the season for curating your houseplants!

One of the most popular houseplants of all continues to be Phalaenopsis, also known as ‘Moth Orchid’.

Read our guide on caring for this and other lesser known orchid varieties:https://t.co/xqBD4dnq8C pic.twitter.com/JlVxwi05T2

Carefully removed the moss or bark from the roots of the plant. To get all the moss and bark off, you’ll probably have to soak the orchid roots in water for an hour or so to loosen up the media. Then it will come off more easily. Once you can see the roots clearly, inspect them for any imperfections like brown spots and weak areas. Remove unhealthy roots because if they are placed in water, they will quickly rot, severely stunting the growth of your orchid.

When choosing an orchid for water culture, it might be better to pick newly purchased plants with strong, adaptable root systems. Established orchids grown in bark or moss for a long time may not adapt to water culture.

“The best candidates for water culture are orchids that you just purchased.”

“The orchids that I had in my collection for, say two or more years did not convert well to water culture and had to be placed back in media,” she said.

Definitely don’t try this with an long-established orchid in your collection. Water culture won’t always work, and your plant could die.

“Preferably use an orchid that you can replace if you need to. Water culture doesn’t always work.”

“When it works, it’s wonderful, but when it doesn’t, I re-pot them back into media.”

This orchid grower suggests allowing the orchids to dry out for some time during the week. Empty all the water from the container for a couple of days, or longer, depending on how deep you keep the waterline in your vase. She also gives great tips on how to fertilize and add minerals and calcium to the water for brief periods each week. After all, orchids can’t grow on water alone, no matter how green your thumb may be.

We hope you see sprays of beautiful flowers appearing on your plants again in the near future.

For more tips see the videos from the Orchid Whisperer below: