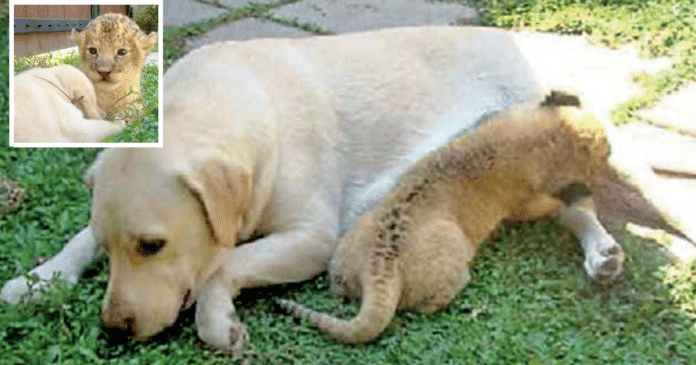 Even among cats and dogs, there are many instances of strong and even loving interspecies bonds. One particularly large cat, a lion cub, faced rejection from its mother at the Dehiwala zoo in Sri Lanka. Out of four cubs, only one survived. Zoo staff removed the cub just in time, but he was weak and near death. That’s when they found an unlikely surrogate mom who happened to be Labrador Retriever.

The Zookeepers knew that feeding the lion cub milk from a large-breed dog would be the most nourishing choice, so they set out to find a source. It was serendipity that Heshan Mendis’ Labrador, Shelly, had just given birth to puppies. They brought the cub, who was the size of a housecat, to see if maybe the dog would take care of him along with the puppies. 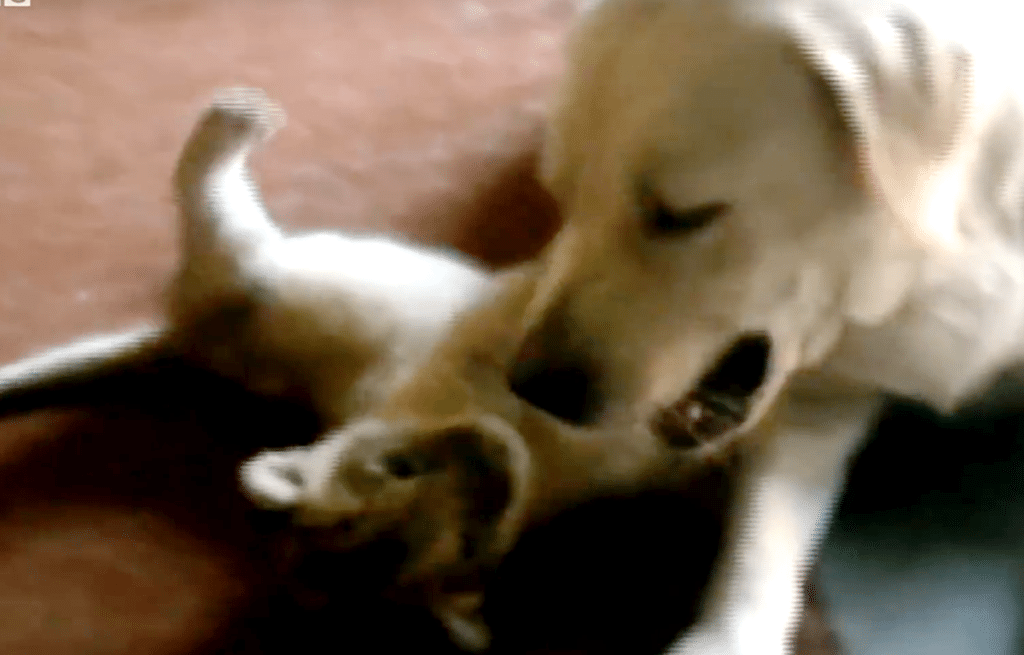 “There is a tendency for dogs to attack cats,” said Mendis, who noted another concern: “It was tough for us because the cub was very weak.”

Shelly rejected the cub at first, but Mendis tried again, allowing her to inspect and interact with the cub until the wee hours of the night. Finally, around 3 a.m., the dog started to accept him as her own. The cub’s life was saved. Even better, the puppies treated the cub just like another puppy, playing with him and allowing him to nurse.

Amazingly, the bond between Shelly and the lion cub became so strong it seemed she actually favored him to her own puppies. When three weeks passed and it was time to take the cub back to the zoo, the dog grieved the loss, refusing to eat for two days.

“She licked him and she loves the lion cub more than her pups,” said Mendis.

Heshan Mendis went to visit the lion after two years and said:

“It was a magnificent lion. I felt and was petting the lion. It recognized me and I had no trouble,” he said. “I felt like I was touching a dog.”

Mendis would like to reunite the lion with Shelly but says it isn’t currently possible. He would like to see if the zoo can separate the lion from the other lions in the pride so that the dog can make a special visit someday.

Posted by Ridiyagama Safari Park on Friday, May 5, 2017

See more in the video from W NOW below:

More from BBC News below: