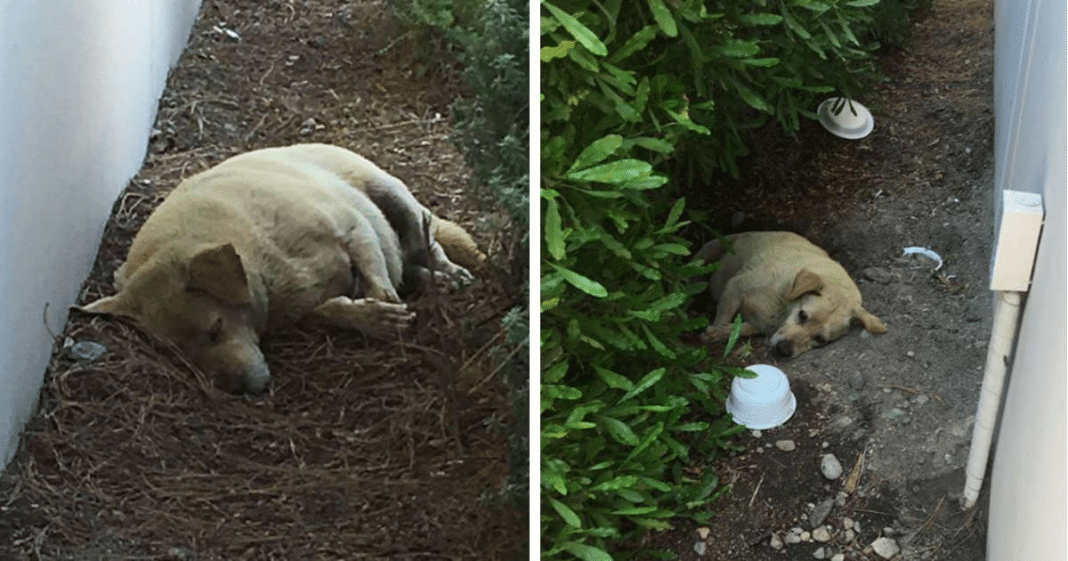 For dog lovers, it’s no surprise that dogs show unconditional love despite the cruelty or disregard that is shown them by people or just about any setback, but one Labrador retriever really exemplifies that today. Teddy, an 8-year-old yellow Labrador Retriever was abandoned when his family moved away. It’s totally unconscionable, but something far too common. Although we all know animals are not throwaway items, some people are just that cruel.

Teddy was left to survive alone for months in San Bernardino, but being a loyal dog, he didn’t stray too far from home. He didn’t give up hope his family would return for him. He stayed nearby and across the street at a landscaping company, where he was seen laying in the dirt. His survival depended on scraps occasionally given to him by people passing by, but even then, the people who worked at the company sometimes threw away the food and water, even if it meant life or death for Teddy.

Finally, a glimmer of hope arrived for the forlorn and abandoned dog, as one delivery driver took a simple action. He knew that if he could get Teddy’s story out there, he would have a chance, so he posted pictures of him to a dedicated Instagram account: oldboy909.

“Everyday I see him hungry and thirsty waiting for any truck driver with enough heart to give him something to eat or drink. It breaks my heart and I wish I could help him but my situation simply will not allow me to bring him home. Im going to post pictures of him daily as he is until someone with the heart and position to give him a loving home #Oldboy”

The simple act of posting Teddy’s picture resulted in an outpouring of support, as people wanted to know more about the Labrador and how to help. Soon, Larry was taken home by a couple. A GoFundMe page was created to help, and Larry was on his way to some wonderful animal rescuers.

“I want to thank you all so much for spreading the word about him. It melts my heart and restores my faith in humanity,” posted the instagram account.

Teddy was taken to get a checkup at the veterinarian, and they discovered he had some serious medical issues. An ultrasound found a tumor on Teddy’s pituitary gland that caused Cushing’s disease. He was bloated and missing patches of hair, having difficulty moving, and was feeling bad even without the rejection from his family.

Fortunately, Love Leo Rescue came to save the day. Love Leo Rescue, a foster-based rescue located in Los Angeles, has a noble mission: to rescue dogs that may require extra care and give them a second chance at life.

“We have a soft spot for dogs that needs special medical care in order to make it out of the shelter. We know most adopters will not be able to adopt a dog from the shelter that needs a costly orthopedic surgery, or a puppy that is stricken with parvo. We believe these dogs deserve a second chance.”

The Labrador’s story made him a local celebrity, and he even appeared on national TV with a name change: Larry. He was treated with medication for Cushing’s disease, and he started to lose weight. His personality changed, as he started feeling much better. He became outgoing and affectionate, constantly seeking attention and he never wanted to be left alone again.

Yet even with all the media attention and help from rescuers and veterinarians, Larry is still looking for a foster home. The Dodo reported that he has been taken in by three families but returned each time. He requires medications to treat his Cushing’s disease, but the expense would be covered by Love Leo Rescue as long as he remains in foster care.

Surely, a family is out there looking for this special dog. Is it you or someone you know? Contact Love Leo Rescue for more information.

Larry the lab got his incredible story in the @thedodo Swipe ?? to see how far this special boy has come. He went from…