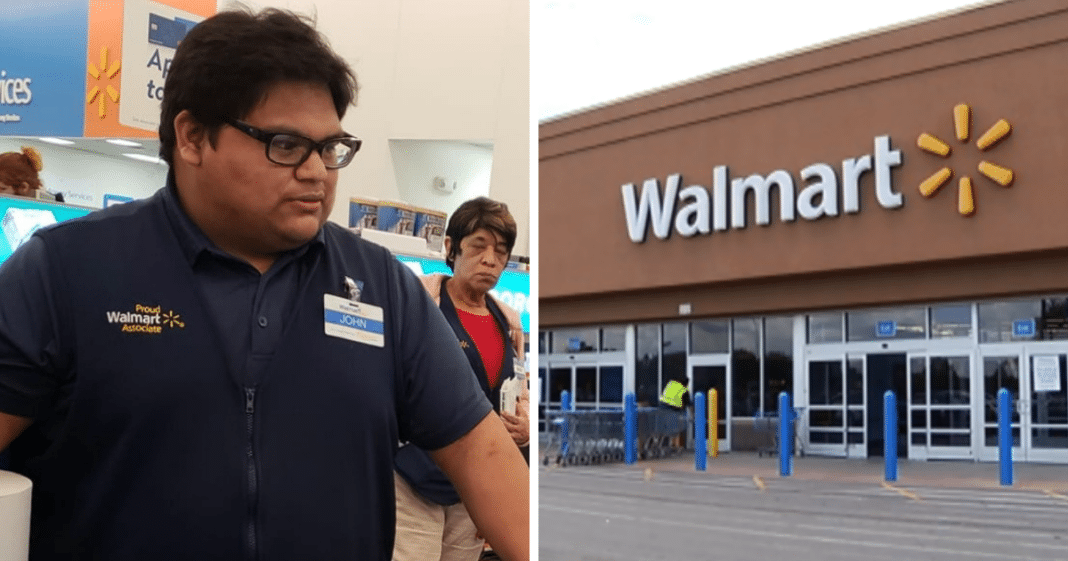 A woman was checking out from a Texas Walmart with a cart full of groceries on December 17. The woman realized she wouldn’t be able to afford her food and started to panic and cry. That’s when the cashier, 19-year-old John Lopez Jr., did something extraordinary: He paid for the woman’s groceries himself. The cashier gave her a total of $110.

“I just felt in my heart that the Lord told me I had to help her.”

Lopez didn’t realize that his actions had been noticed and deeply appreciated, not just by the distraught shopper, but by all those around him. Another shopper, Laci Simms took a photo and shared it on social media with the story of what happened. As it turns out, she and other shoppers at the Princeton, Walmart had noticed what a great guy Lopez is.

“I just witnessed this ‘kid’ pay for a cart of merchandise for a woman in obvious distress about her inability to pay. She was a few people ahead of us and when she had trouble paying her bill he stepped in and told her if she’d wait he would pay her total. Ya’ll, it was $110 dollars!”

“If you have never had the pleasure of going through John’s checkout line at the Princeton Walmart, please seek him out on your next visit. He is always singing, upbeat, courteous, joyful and efficient.”

“He just renewed my faith in humanity and the generation we are raising!”

Simms’ post went viral, with over 3,700 shares and many thousands of likes and comments. Everyone was impressed by the cashier’s generosity and kindness.

“I’m so proud of the recognition given to John for his act of kindness, as this may prompt others to do the same!! He’s such a nice young man, I always enjoy going through his line at Walmart!”

Another person in the community, Brandon Weddle, saw the post online and recognized the cashier from shopping at the store.

“There were thousands of comments on the story,” Weddle told InsideEdition.com Monday. “Saying what a nice person he was, how he was always in a good mood, how people always left in a better mood after seeing him.”

“I’ve been through his line a couple of times, my wife has too, and we’ve spoken about him, how he touches people on a daily basis.”

Weddle saw that nobody had set up a Gofundme page for the kind cashier and decided to make one himself.

“With it only just being a few days before Christmas, I decided to set up a page for him,” said Weddle.

The fundraiser had an original goal of a thousand dollars, but the story was shared on the news and in 16 days it raised over 36 thousand dollars. Weddle turned the account over to Lopez, who says he plans to use it to go to college.

Lopez also received a visit from Princeton Mayor John-Mark Caldwell, who presented him with an award certificate and medallion from the Police Chief honoring him for his integrity and kindness. Following the award, they sang “We Wish You a Merry Christmas” together.

“We’ll hope that you spread some of this cheer throughout our city and you make us a better place to live, John.”

“As a matter of fact, you need to leave Walmart and come to City Hall,” he added later.

Lopez later attributed what he did to his parents.

“My parents basically taught me if someone needs help you should be able to help them and if someone is down, bring them up,” Lopez Jr. said.

The cashier said he made it a daily habit to put a smile on those around him.

“I make it my goal to at least in one way make someone smile,” Lopez Jr. said.

John Lopez Jr. never suspected he would be rewarded many times over when he selflessly offered to give up his hard-earned money for a stranger in need. Deciding to help others is its own reward, but can often be repaid in unexpected and amazing ways.

See what happened in the video from CBSDFW below: