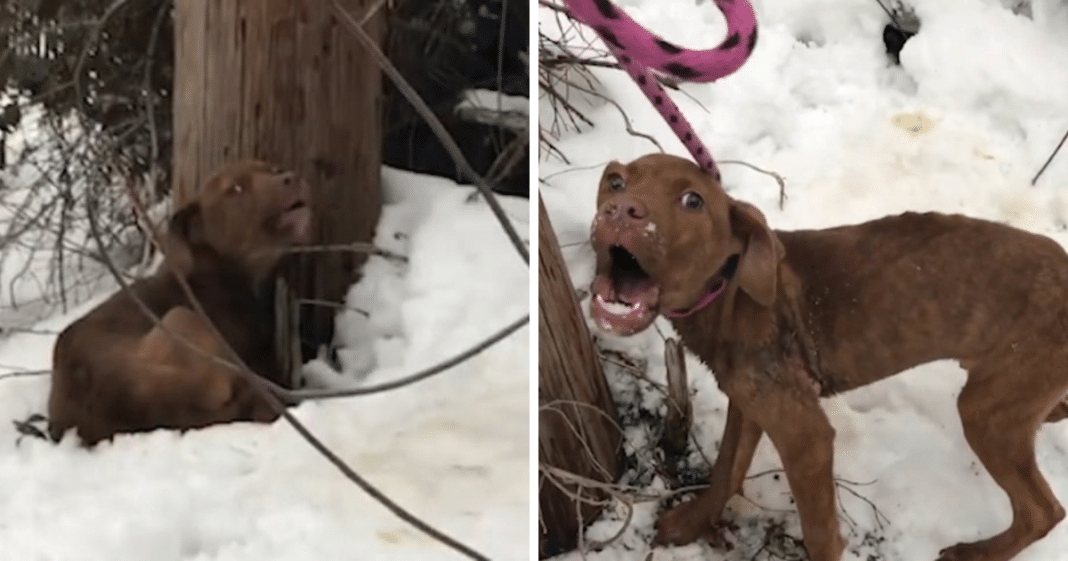 Stray Rescue of St.Louis shared a video of the moment they saved a puppy left huddling next to a telephone pole in the snow. As the rescuer approached the puppy, he lets out howls of fear and anguish that are heartbreaking.

The rescue group was in emergency mode as cold temperatures hit the region. They were doing all they could to save strays from the dangerous weather, but this little dog broke their hearts.

“This poor soul completely broke our hearts in two,” explained the rescue group.

The little brown puppy was hard to spot in the fenced ally along a snow-covered street. There he huddled directly in the snow with nothing to protect his starving body from the ice. His small form blends in and almost disappears.

However, when Donna Lochmann approaches him slowly with a soft reassuring voice, the shivering puppy is suddenly impossible to notice. The pup lets out a howl like none you have heard before. (see video below.)

It’s clear that he has been suffering beyond words, abandoned to face a slow and painful death in the cold, but for this kind woman who intervenes to save him.

Somehow, he’s managed to get tangled around the pole. As the woman approaches him from behind, he looks back with fearful eyes, unsure if she is friend or foe. He continues to howl for his life as she brings a pink leash out and safely secures the pup. 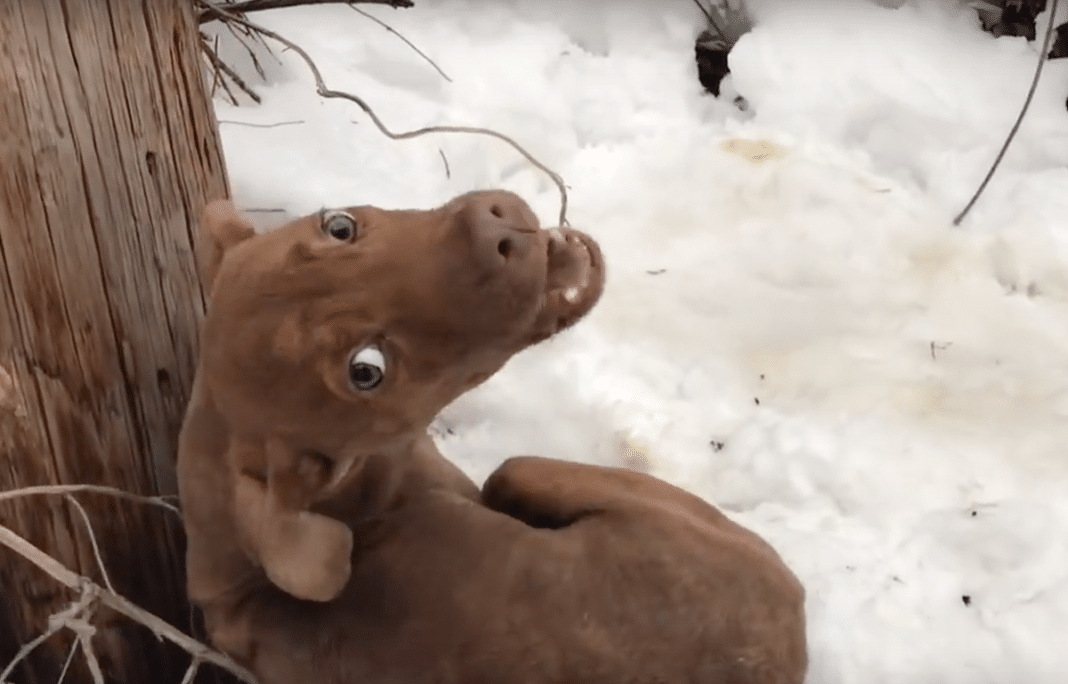 With his last remaining strength, the puppy gets to his feet and cries out. Moments later, sweet relief. The kind woman talks reassuringly to him, petting his muzzle as he nervously wimpers and slowly begins to realize he is finally safe and protected. You can see it in his eyes. 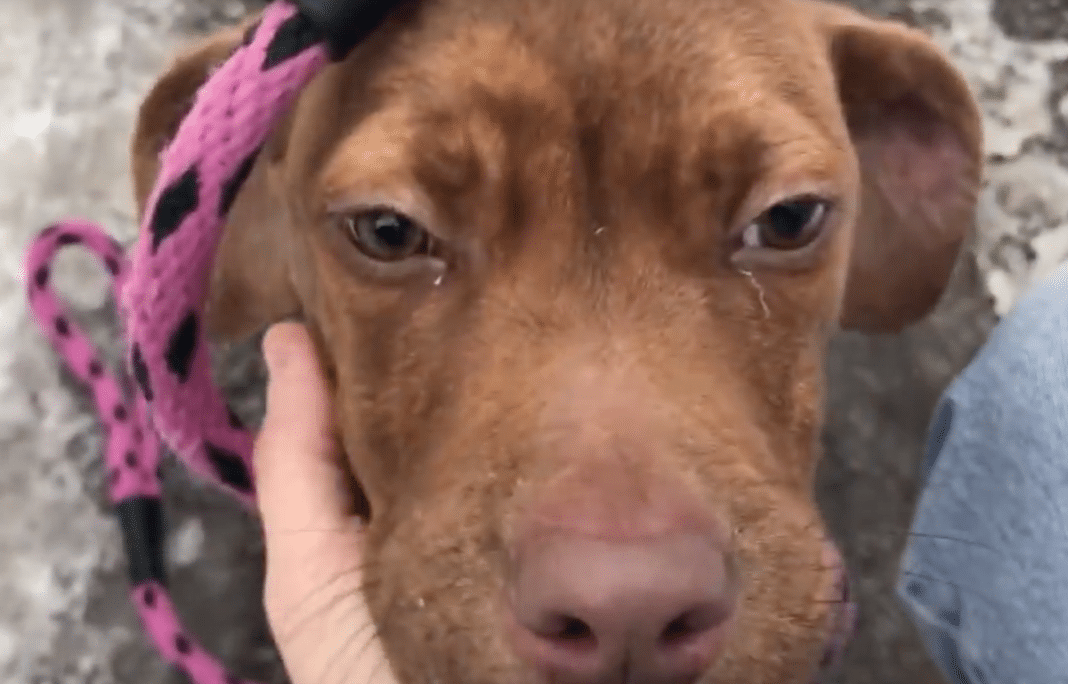 Weezer slowly starts to calm down

She manages to earn the puppy’s trust, and soon he is craving affection, licking her and begging for attention.

“Don’t be scared. Come with me, ok? Let’s get you in the Jeep,” she says soothingly.

Once inside the vehicle, the puppy’s tail starts wagging as he showers the driver with affection. His near-death experience is over, and his savior is right there beside him. 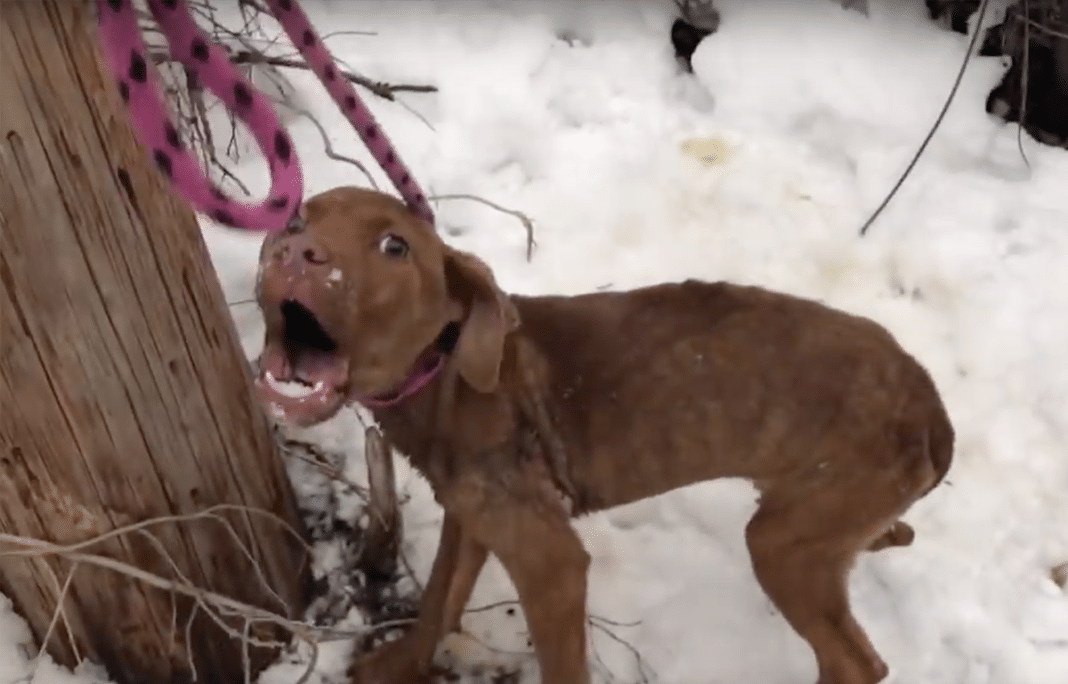 They head straight to a trauma center for emergency care, where it turns out the dog had an infected wound on his side and paraphimosis. The rescuers think an embedded harness may have caused injury to the dog’s foreskin.

Fortunately, the puppy’s injuries were not serious and he got a new cute name, Weezer. 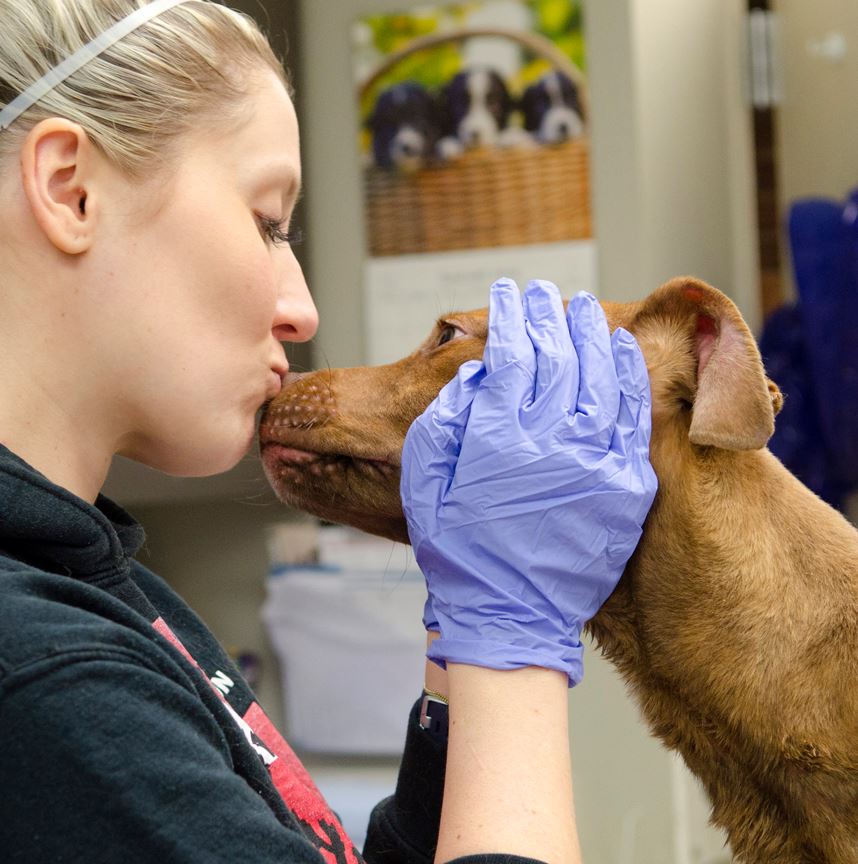 The rescue group documented Weezer’s story on their website.

“We’ve seen many embedded collars, but not embedded harnesses. Thankfully, his paraphimosis is a minor case. He looks to be about 7 months old and is as sweet as can be!! We named him Weezer. Thank you for donating, every single donation matters!”

And this is Weezer today, looking happy and healthy.

“Look how big Weezer is getting! Such a big, strong, beautiful boy. He is loving life in his forever home! Remember his heartbreaking rescue? He cried and screamed in both fear and pain. It’s amazing what love can do.” 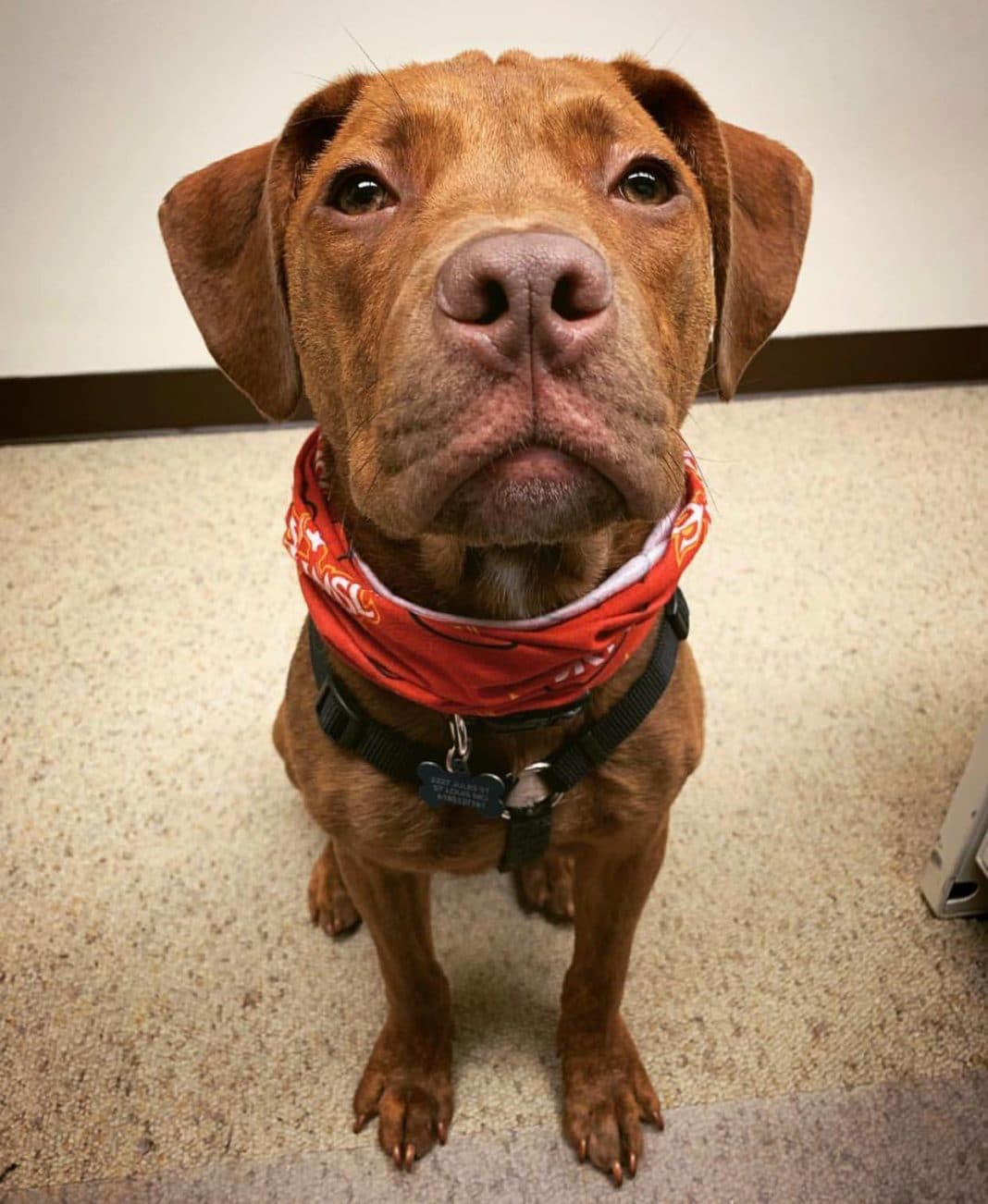 Weezer gets a new home and a new name

In his forever home, his name is now Bowie and he lives with two doggie siblings. 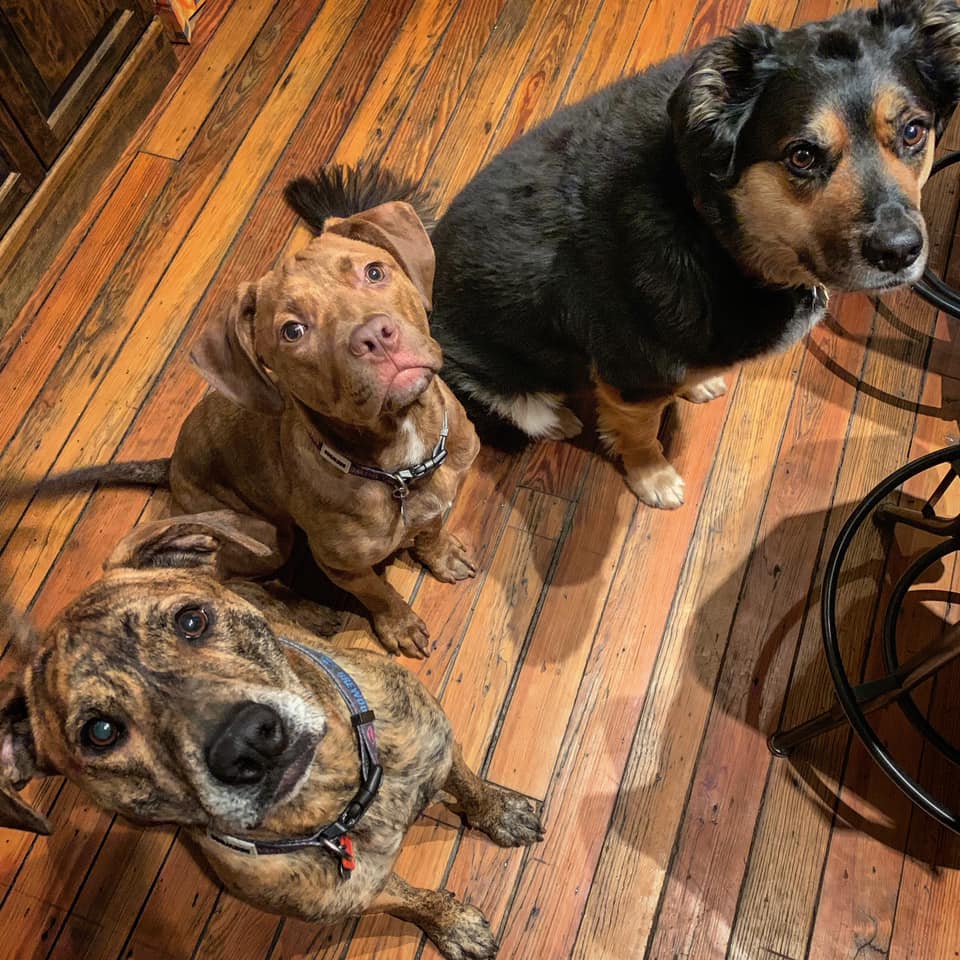