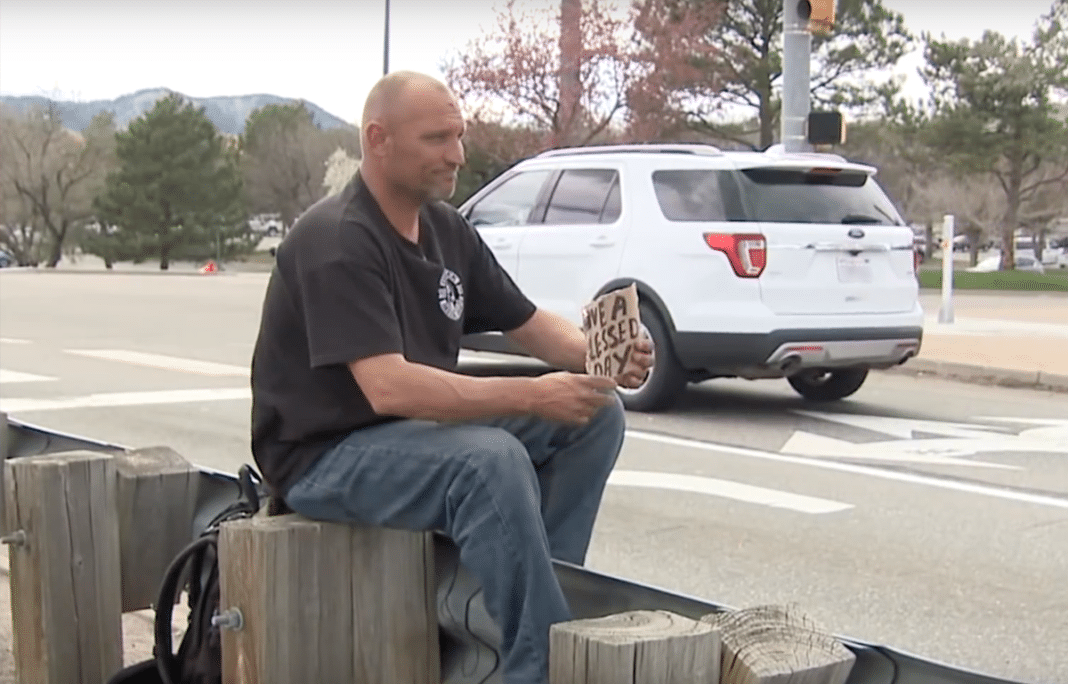 Before you judge a book by its cover, you might consider the story of Darin Barton from Lakewood, Colorado. The homeless man has been a self-described panhandler along Interstate I-70 for several years, sitting on a guardrail at the off-ramp near the Denver West exit. He has been homeless since July 2014, when he says he was injured in an accident involving a light rail train and a car in Denver.

“A lot of the people are not very nice,” Barton said.

“There’s a saying that’s been around for a lot of years. It says, ‘Don’t judge a book by its cover.’ I don’t. I sit out there every day, and I don’t judge nobody. I just try to make their day a little bit better,” Barton said.

Barton holds a sign that reads “Have a blessed day,” relying on the help of strangers. Then one day, he was holding the sign when he witnessed a semitrailer crash into a line of 28 cars. He sprang into action to help others as the cab burst into flames.

A man named Joshua was doing a live stream video on his YouTube channel and caught what happened as the semi sped directly past him and crashed. He then interviewed Barton after he rescued people from the underneath the bridge on Eastbound I-70 in Lakewood, Colorado.

“I hollered at my buddy which was over there and I told him to call 911 and then I took off under the bride and started helping people,” said Barton.

“You didn’t think about your own safety at all?” asked Joshua.

“Not at all,” responded Barton.

See what happened below. Warning: There is some profanity when Joshua witnessed the truck barreling down the road beside his car.

“I heard the truck plowing through cars and as I looked, his cab rolled over and a ball of flames started explosion after explosion. As people were running out of it, I ran toward it,” explained Barton to Denver7.

As people involved in the crash ran to escape the flames, Barton came down the embankment and headed into the fire. He says he pulled three or four people out of two cars.

“Don’t judge people based on how they might look or whether or not they have a home or whatever, because that person you look down on could be the one saving your life one day,” said Halladay.

Barton wants people to listen to what homeless people have to say before judging.

“Pull over and talk to me… or any homeless person. Take them out to lunch or something, just find out their story. Might learn something that you never knew before,” Barton said.

Although he is being seen as a hero today, Barton remains humble.

“I just did what I hoped anybody would’ve done if I was sitting down there,” he said.

Following the story, the local news began receiving overwhelming support for the “homeless hero” from people who want to help him. FOX31 set up an Amazon Wish List and received many donations. Then they started hearing stories about Barton.

As it turns out, this isn’t the first time he has come to the aid of drivers at on Interstate 70.

“Valerie Blease said that Barton also helped her get to safety when she was injured in an accident in the same area two years ago.

“He said get out of the car it’s smoking and even at that point I was like what?” Blease said.

Blease said he seemed to come out of nowhere. She says she recognized the man now dubbed a “homeless hero” and said, “I wasn’t surprised at all.”

A very thankful Barton appeared on video to thank everyone who donated to help him.