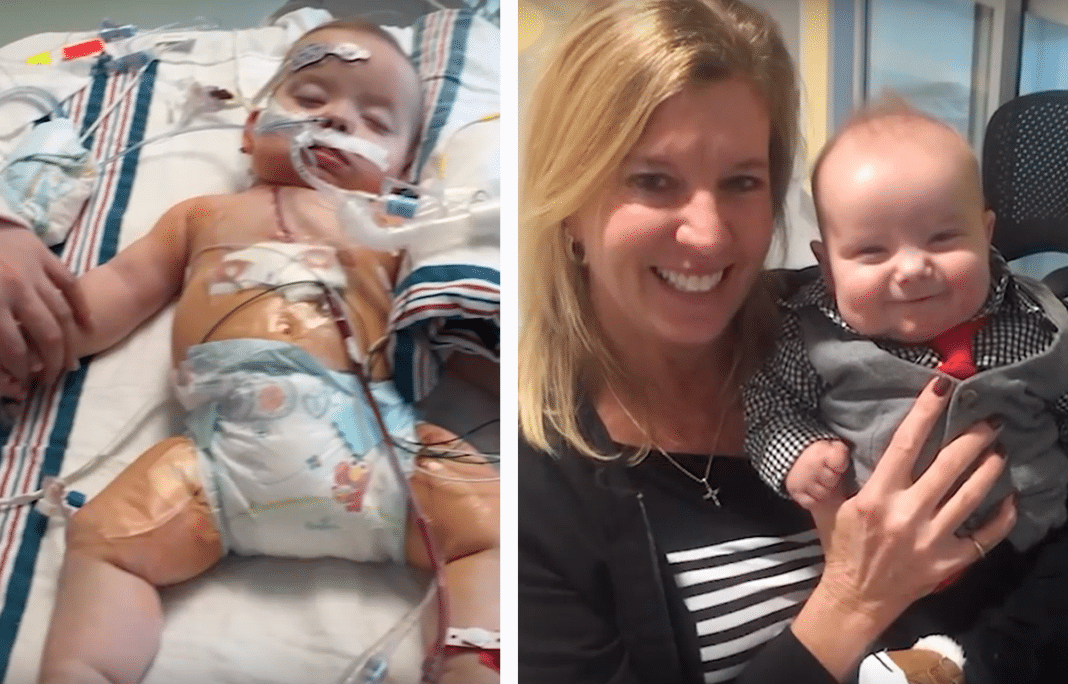 A nurse, Angela Farnan cared for countless babies born with life-threatening health issues in the Children’s Hospital of Illinois. All her life, she wanted to have kids but in the meantime, she cared for each baby as if they were her own in the pediatric intensive care unit (PICU) in Peoria. She has worked there for 32 years.

During all that time, Angela formed close bonds with the babies whose lives depended on her care. Despite facing some heartbreaking cases, she stayed because she loves the kids so much.

“When someone asks me how many kids I have, I tell them it depends on the day. Sometimes 15 or 20,” she said, chuckling. ‘Obviously God has a plan for all of us. I’ve been working in the PICU a long time, and in my heart, I know that’s where God wants me to be. Working in the PICU – it’s heavy, you can get heartbreaking cases. For me, you think about what you’re doing in life and pray about it. I always stay. I stay for the kids.’”

In May, Angela will celebrate her 11th wedding anniversary to her husband Rick. She wanted to start a family years ago but found out she couldn’t get pregnant shortly after her wedding. Instead, she cares for the kids in the PICU like they are her own.

“I treat any patient admitted to the PICU as though they are family, providing the best care, quality care. I treat the family with love and respect,” she said.

“We’re there to nurture them all.”

Then in May 2017, a newborn baby boy named Blaze came to the PICU. He was born with a congenital heart defect detected in utero. Blaze’s heart was too small and underdeveloped on the left side, leaving the right side to do all the work with only one pumping chamber. Regardless, he had an animated personality that endeared him to the nurses immediately.

The newborn would need a series of operations, including one after only three days of life. If he survived the surgery, he would require round-the-clock intensive care and monitoring.

For Blaze’s biological family, there were no resources or support to care for the baby at home. To complicate matters, Blaze wasn’t feeding normally. The family lived far away and couldn’t safely take the baby home. At any rate, he would soon require another surgery.

Farnan decided to step in to help the baby, who she had already formed a close bond with. She decided she would provide a medical foster home, undergoing training, classes, and home visits in order to qualify for state assistance with an organization.

Then the organization unexpectedly withdrew from the case, and Blaze would have to remain hospitalized. He was 6 months old by that time and it was the dead of winter, cold and flu season.

“I was a little crushed,” Angela said.

A month later, Angela got a phone call. A voice on the line asked if she would be willing to foster Blaze without any financial assistance from the state?

She and Rick decided they would love to be Blaze’s short-term guardians. To help out, Angela’s coworkers came together to help, buying the couple everything they would need to create a nursery at home and helping out with babysitting.

Angela Farnan, a primary charge nurse at OSF Children's Hospital of Illinois, officially became a mom to her son Blaze, 1, on June 8. "I really feel that he has blessed our lives," Farnan,of Peoria, told "Good Morning America."https://t.co/kfPZ05TX8P

Blaze went to stay at the Farnan’s home, and the couple fell in love with him.

“We had him here a couple weeks when we just fell in love with him,” Angela said.

Even so, the Farnans learned that taking care of a child like Blaze was an eye-opening experience, even for a pediatric nurse. How could his parents be expected to cope with all of the challenges without resources?

“It really made me question the expectations we have for parents taking home a medically dependent kid … you can’t do it all yourself, and I’m a nurse,” Angela said.

The time for Blaze’s second surgery finally came around and his biological parents made the trip to the hospital. The surgery was a success. The parents, Angela, and Rick watched him as he was hooked up to monitors and equipment that kept him alive.

That’s when Blaze’s mother made the extremely difficult decision to ask the Farnans to become his permanent parents. They faced a heartbreaking decision to let go of Blaze so that he would have the best life possible with all the care he needed.

“The birth mom, God bless her. She made a heartfelt, heart-breaking decision,” said Rick.

The Farnans had no doubts they would love to adopt Blaze. For Angela, her dream of having a child came true at that moment.

Blaze needed her and the lifetime of experience that only she could provide him.

“I go to bed every night and thank God for the opportunity to be a parent. I pray over him every night. He is truly a blessing,” said Angela.

Nurse of the Week: Angela Farnan Adopts Baby With Rare Heart Condition She Cared for as a Nurse in the ICU https://t.co/CYtbMo1UCm https://t.co/ayIQdj52A4 pic.twitter.com/q6nGdS8lcj

See more in the video from Good Morning America:

More from CBS Chicago below: