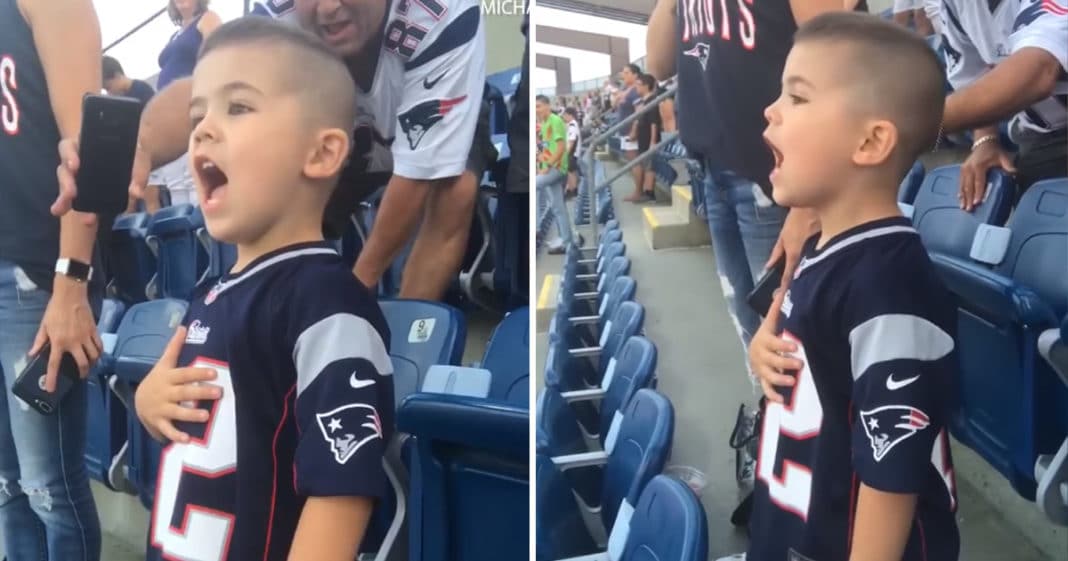 On August 16th, football fans crowded into the stadium to watch a preseason game between the Patriots and eagles. Boston police officer, Kim Tavares was in her uniform and ready to start things off by singing the national anthem. Little did she know she’d have someone accompany her.

That someone was the son of two fellow Boston police officers and friends of hers. 3-year-old Garett Spence donned his Patriots jersey. With his hand over his heart, he joined Tavares in singing the Star Spangled Banner. With heartfelt abandon, the tyke stood tall and proud, belting out the lyrics.

The video of Garrett singing along to the national anthem went viral. It reached Tavares. She later dubbed him her new partner in crime.

I might be a good luck charm for The @Patriots ?Me before The National Anthem. ??17years on the job and this is my first #wardrobemalfunction??‍♀️ #notlikejanetjackson #imnotperfect??‍♀️ pic.twitter.com/8ObI4rgVoo

“This is why I sing,” Tavares wrote on Twitter, reposting the video of Garrett singing. “Check out my new lil partner ‘G.’

“His mom and dad are friends of mine. Both are police officers. Didn’t know they were at the game.

”The singer was very proud of the little man’s enthusiasm. “Teach them well and let them lead the way!” Tavares wrote.

3-Year-Old Sings Along To National Anthem At Patriots Game

Garrett’s parents echoed her sentiment. The police officers told WBZ-TV what they thought of their son’s moment. Michael Spence, the boy’s father, said he was “obviously very proud of his patriotism.”

Garrett’s parents received a lot of praise for how they’re raising their little boy. The Spence family is making sure their son has a healthy respect for their country and flag while showing a willingness to serve and protect.