Guy Shares Photo Of New Dog Online, People Immediately Call Police On Him When They See It 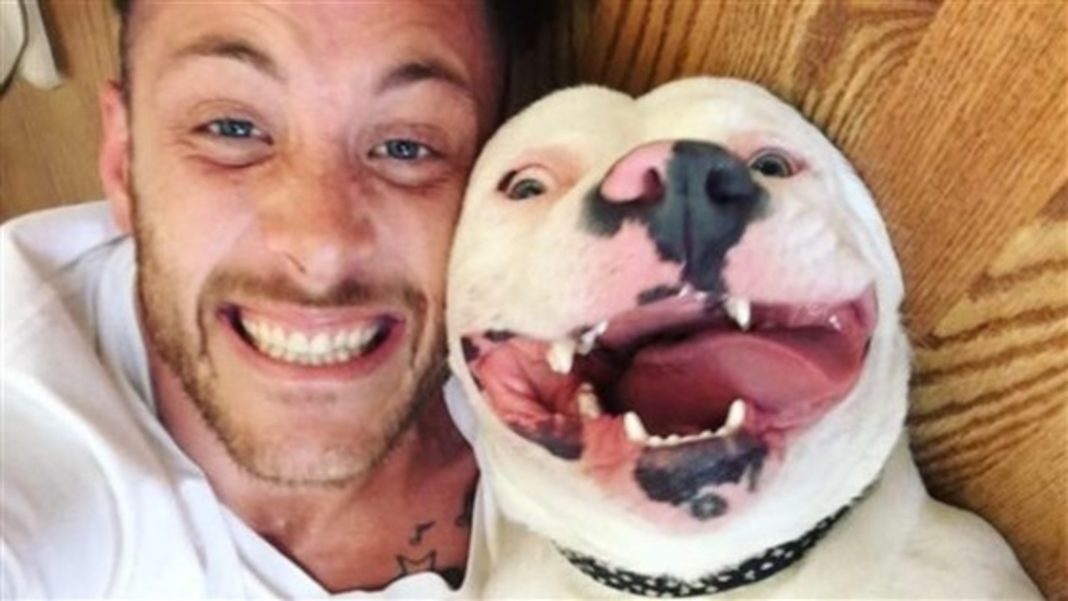 In 2016, the Michigan township of Waterford had a strict ban on homeowners keeping pit bulls as pets. But one owner who refused to give in to the law fought back and changed the city’s ordinance in the process. It all started when a photo of Dan Tillery and his dog, Diggy went viral.

In June of 2016, Dan and his girlfriend, Megan decided to adopt a dog. The pair just bought a house, so getting a dog was naturally the next step: “It was huge for us — why we bought, to get a dog,” Tillery, 30, told TODAY.

Dan and Megan didn’t have to search long. They found Diggy at the no-kill Detroit Dog Rescue Animal Shelter. Poor Diggy had waited for three months to find a forever home. It was love at first sight, dan said after seeing the pooch’s adoption photo. The process to adopt him didn’t take long. He was welcomed into their new home in no time. The photo that went viral was taken to celebrate this incredible milestone. In the picture, Dan and Diggy smile broadly.

A few days later, however, it was this photo that got dan and Diggy a visit from local authorities. Dan and Megan’s home is in Waterford Township, which has had a long-standing ban on people owning pit bulls. The township is one of the hundreds of towns and counties across the country that don’t allow pit bulls as pets. This is do to breed-specific legislation, (BSL).

We know this photo is going to break the internet and we apologize, but we had to share! After almost 100 days in the…

According to Waterford’s Police Chief Scott Underwood, officers paid Dan, Megan, and Diggy a home visit after receiving complaints that the dog was illegal under the city’s breed ban: “Based on the physical characteristics of the dog,” the chief said. Officers determined Diggy couldn’t remain with dan and Megan. They were given three days to find him a new home outside the city’s jurisdiction.

Rather than follow the order, Dan found a veterinarian to examine his new four-legged friend. The vet discovered Diggy is in fact, an American bulldog, not a pit bull.

Dan also found a lot of public support; 110,000 people signed a petition to allow he and Megan to keep Diggy. It also encouraged Waterford Township to lift its animal ban, And in August of 2016, the township did make changes to its ordinance. The ban is still in place. Those dogs deemed as pit bulls can be examined by a city-approved veterinarian at the expense of its owner. If the vet finds the dog isn’t a pit, the findings will become part of the adjudication process.

“We’re recognizing that this is the kind of thing that could be subject to differences of professional opinion,” township attorney Gary Dovre told the Detroit Free Press.

Just a few weeks later, Diggy’s case was closed. To the delight of Dan, Megan and all their fans, Diggy was allowed to stay: “Case Closed,” Tillery wrote on Facebook. “We get to keep our boy. He’s a good boy.”

“Now Diggy can live out his life smiling with Dan and Megan,” Detroit Dog Rescue founder Kristina  Millman-Rinaldi told TODAY in an email. “When groups of passionate people come together, rescue dogs win!” She further said that she hopes Diggy’s story will help shed light on this problem. That it could help create a bill to do away with Breed Specific Legislation across Michigan and around the country said animal advocate Courtney Protz- Sanders, with the group, Make Michigan Next.

“I think that this case shows how unfair and inconsistent laws like this are,” Protz-Sanders told TODAY.

“We worry about all the loving dog owners out there who don’t know BSL is coming for them and may be less able to fight a successful legal battle,” said Smith. “We are so happy for the Tillery  family and celebrate this high profile win as an incremental and important step towards the end of BSL.”

Diggy is the only one who doesn’t understand how close he came to losing his home with dan and Megan: “Diggy’s never known troubles since he’s been here at his home,” Tillery told TODAY. “His biggest concern is where I hide his treats and do I have an open lap.”

And isn’t that how it should be? Diggy, who needed a home got one. Because Dan fought to keep him, Diggy can live the rest of his days with them.