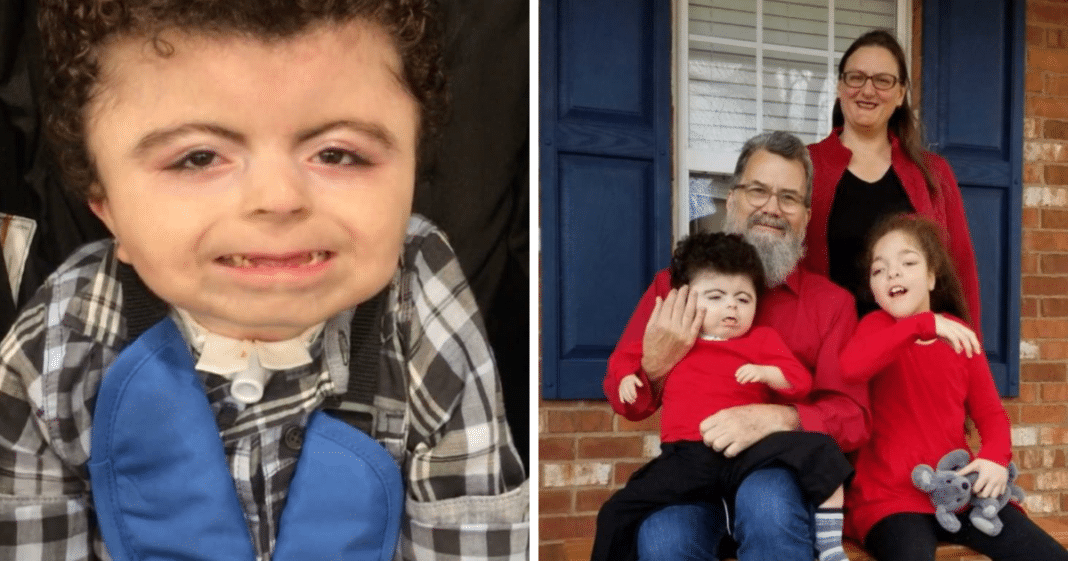 Recently Linda Morgan shared the touching story of how she and her husband Andy opened their hearts and home to two mentally-challenged children who have since brought nothing but joy into their lives.

In 2013, the Morgans welcomed a grandson into the world. However, the child came a bit too early and needed to spend 103 days the hospital’s NICU.

But as the grandparents visited their grandson, they noticed that some of the other babies never had visitors.

For instance, according to Linda one nurse told her, ‘‘That little one there hasn’t had a visitor in two months. And that one over there, that one’s certainly going to become a foster child.” As a nurse and a mother, Linda couldn’t imagine that, and the words planted a seed deep in her heart that she was starting to reflect upon often.

As a home health RN Supervisor, Linda has encountered several medically fragile foster children over the years. During one visit, a foster mom told her that she would make a great foster mom herself. Linda was surprised,  ‘Me?! Isn’t that really for young people? My husband and I are in our fifties. We have four adult children. For goodness sakes, we are grandparents!’

However, before too long, Linda and her husband would talk, pray, and soon sign up for classes. She explained:

‘The least we could do is check it out.’ ‘Certainly, we could be interim grandparents.’ ‘We can foster until their families figure out how to care for them.’ After all, foster care’s first goal is to reunify families.

Once they were approved, they got the call.

‘Hi, Mrs. Morgan? We have a little girl who needs an emergency placement. I know you asked for babies. This little girl is 7 and has special needs. Can’t walk or talk. We don’t know much. Her mother passed away unexpectedly, and we haven’t located any family.’

Linda only had one question, “When will we get her?”

The answer was that night as they welcomed their new foster daughter Laycee into their home at 11:30 pm.

Linda describes how the couple fell “madly in love with her.” 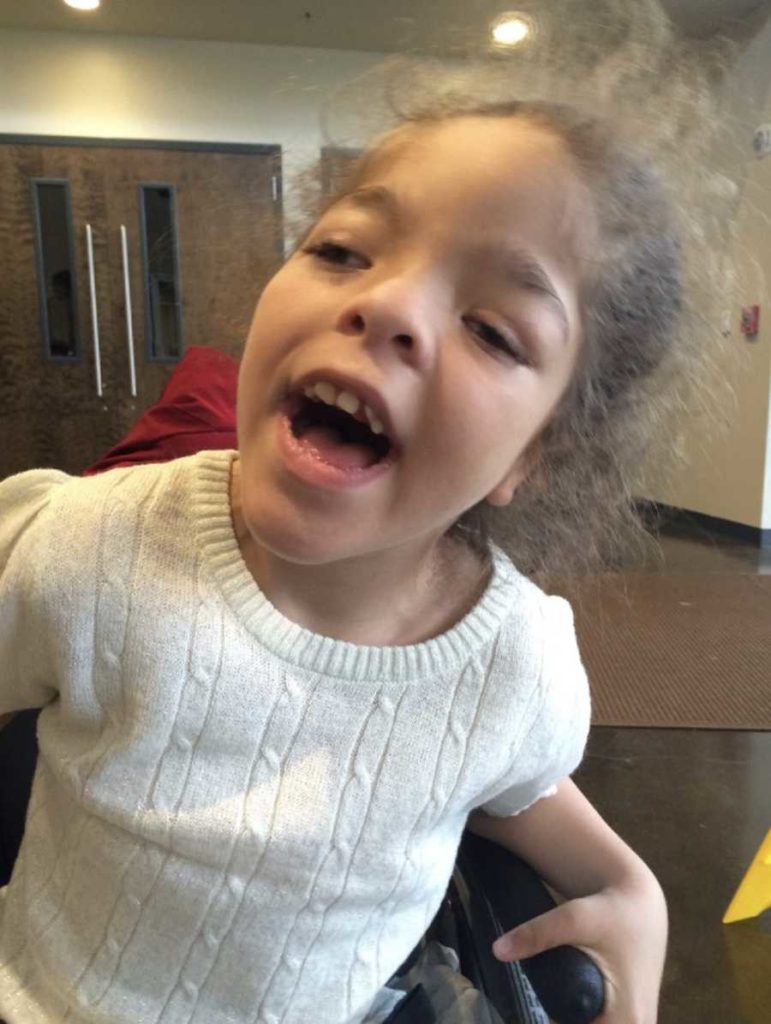 She was beautiful. She was perfect just as she was. She is missing 6 genes on an X chromosome which caused Agenesis of the Corpus Callosum, vision impairment, and some minor deformities. The Corpus Callosum is in the center of the brain and connects the right hemisphere to the left.

We didn’t know if she could learn, but she sure showed us quickly how smart she was! I came home from work every day for two weeks and said, ‘Hi honey, how was your day?’ One day, when I opened the door I was greeted with, ‘Hi honey!’ I cried. She could remember! She could learn!

Six months later the couple got a second call.

‘Mrs. Morgan? We have a 3-year-old little boy in the PICU. He’s been here 6 months and needs a home. He has a trach and vent, heart and kidney defects. He has Cornelia de Lange Syndrome.’

She was shocked to learn that he spent six months in the PICU. She learned that he was sick for the first three months and that no one would take him for the last three. Of course, Linda was itching to say yes, but she had some concerns regarding how it may impact Laycee, she replied:

“Oh my heart! ‘Can we meet him before we commit?’ Our foster daughter has some sensory issues and we knew we couldn’t take a child that made sudden loud noises or self- harming behaviors.”

But once they meet him, the little boy immediately won them over. 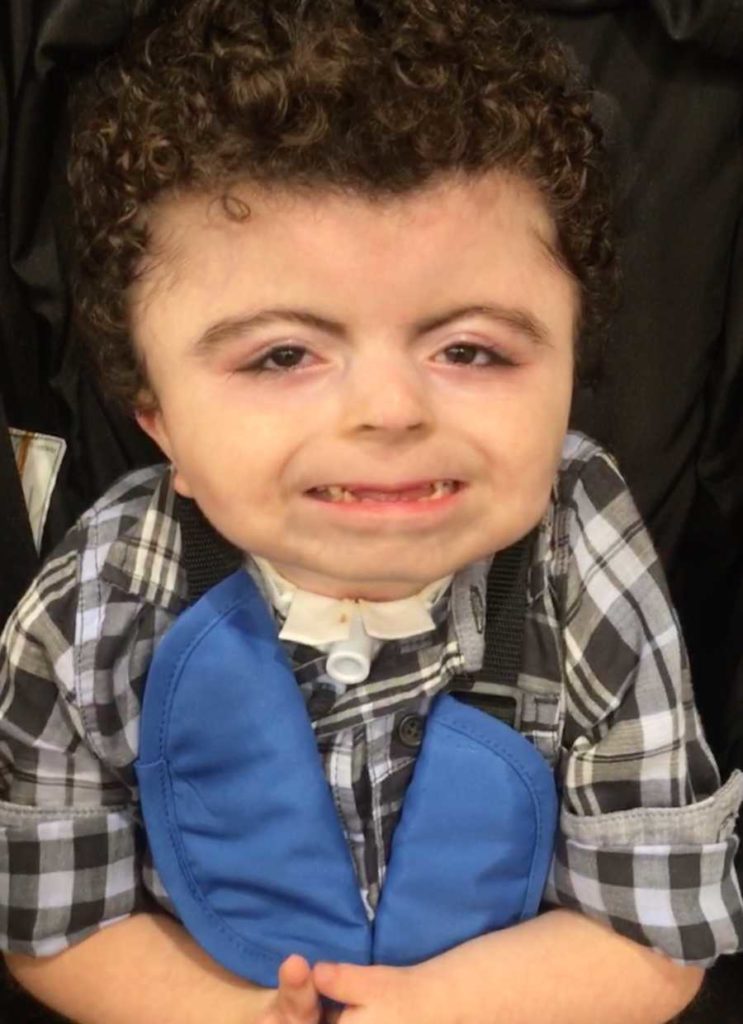 After a few days in the PICU learning how to care for their new foster son Kelton.

At first, he wouldn’t make eye contact. Kelton also has vision and hearing impairments, and at the time he couldn’t roll over or sit up. But over time he would show them just how fast he could learn. 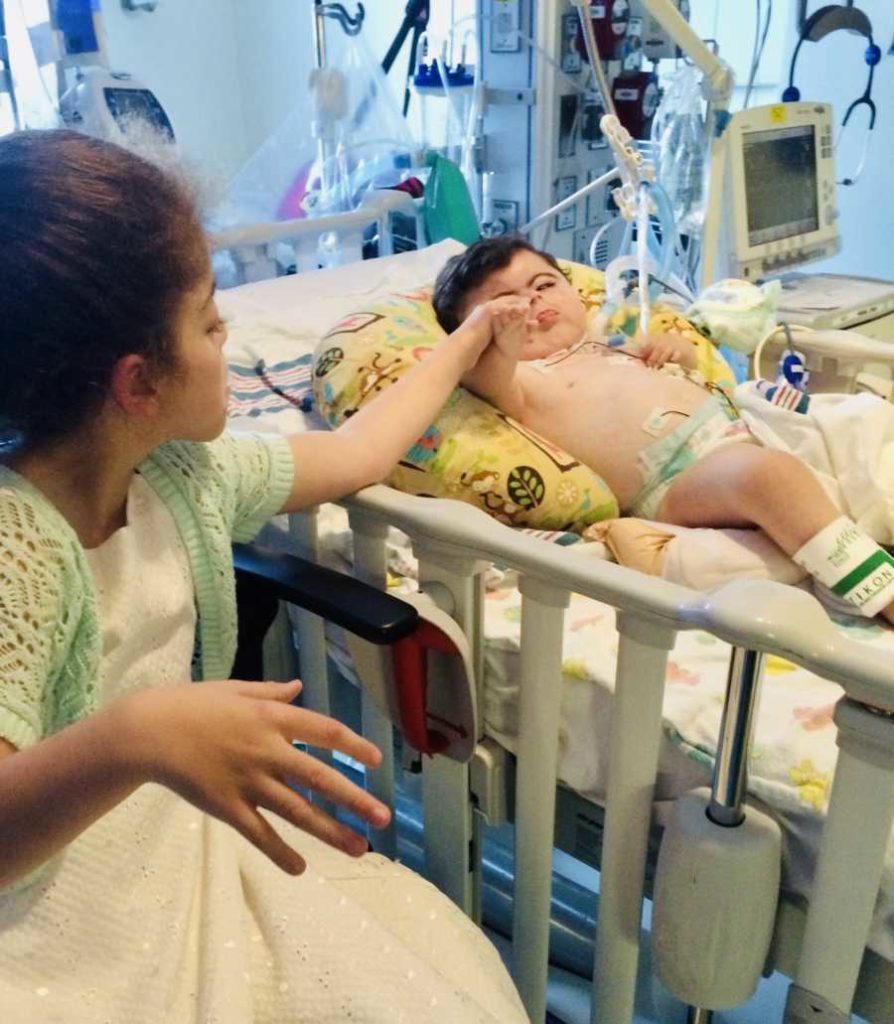 ‘We will be Nana and Papa,’ I said. ‘Interim grandparents,’ I said.

Fast forward to July 2017, and they officially adopted their beautiful daughter Laycee, who Linda describes as “just a ray of sunshine.”

As a matter of fact, they named her Laycee Joy, because of the joy she spreads everywhere she goes.

Since the time they first met her, Laycee Joy, progressed very fast. From barely being able to crawl to walking while holding one arm. She’s even gone from saying just a few words to having memorized many songs and her ABCs.

Laycee also didn’t use to like being touched, but now she can’t get enough hugs and love.

Whenever she first wakes up in the morning and throughout the day, even while she’s getting ready for bed they will hear “love you,” spontaneously in her beautiful sing-song voice. 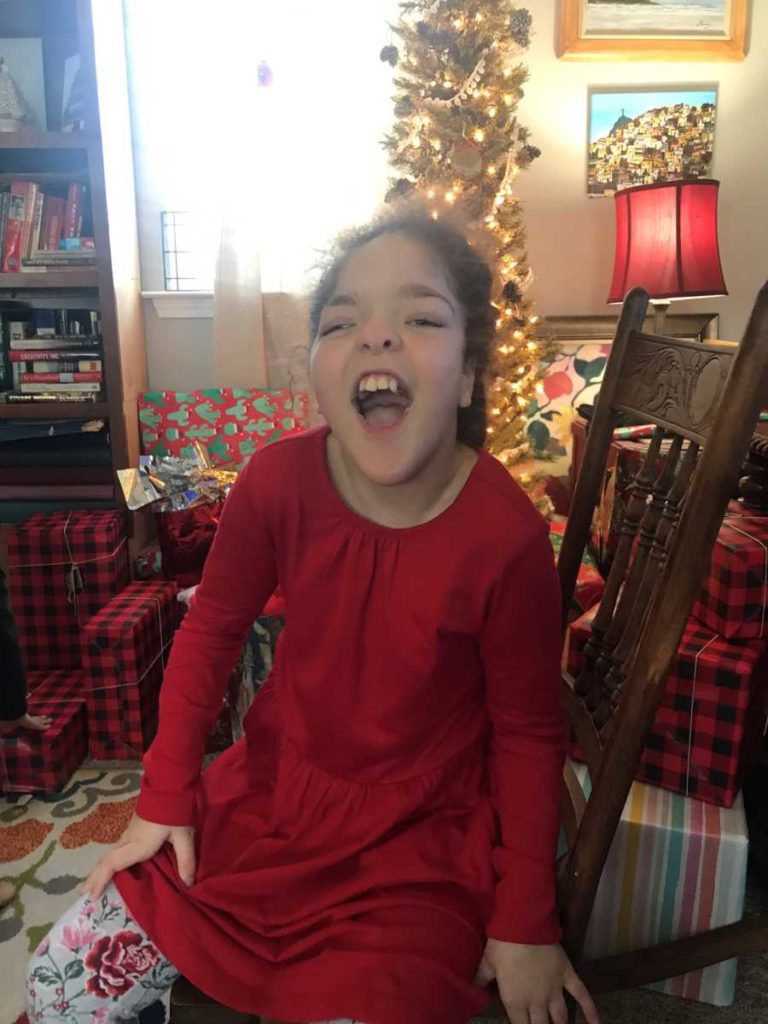 Linda’s tells people all the time that everyone needs a Laycee in their life. She says:

“You just cannot stay mad or sad with our Laycee around.”

They officially adopted Kelton last July, and Linda says that he too can light up a room with his infectious smile.

She notes how everyone adores his beautiful curls and long eyelashes. Kelton loves music and light-up toys and hanging out with his boisterous siblings and nephews.

He’s currently learning to roll over and situp while watching everyone and laughing at funny noises. She says Kelton’s getting healthier every day. 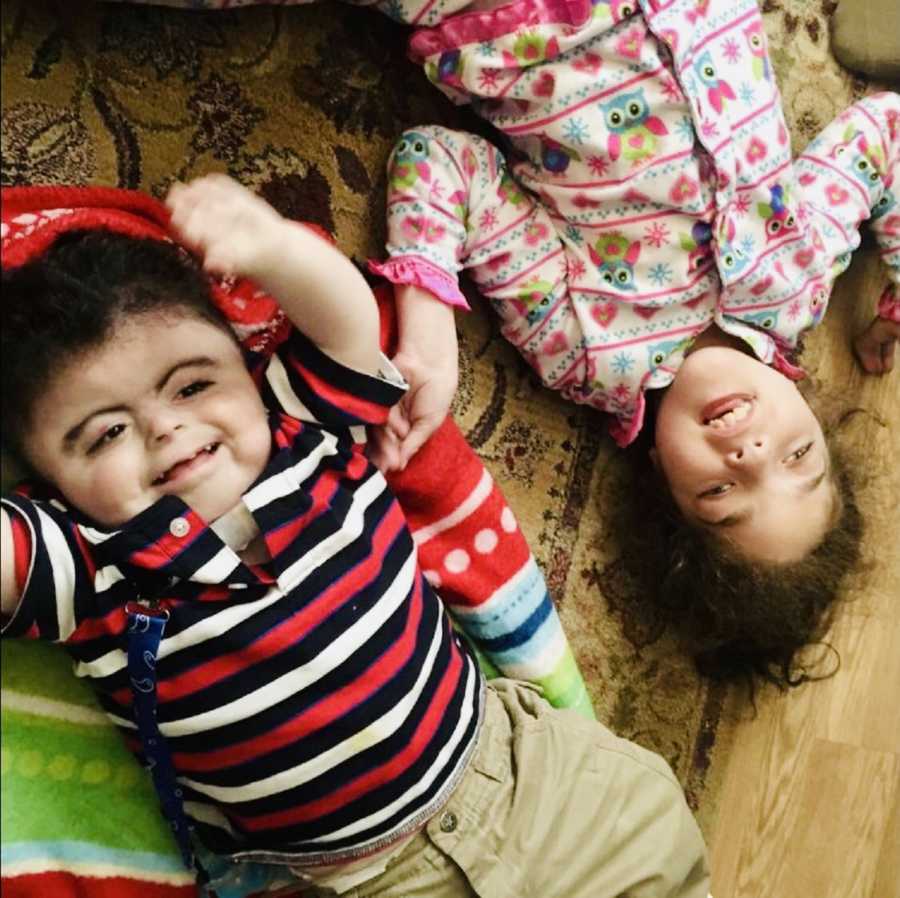 Now Linda and Andy are parents to 6 beautiful adoptive children. She says that sometimes she’s amazed to think how she now has children from age 5 to 29. 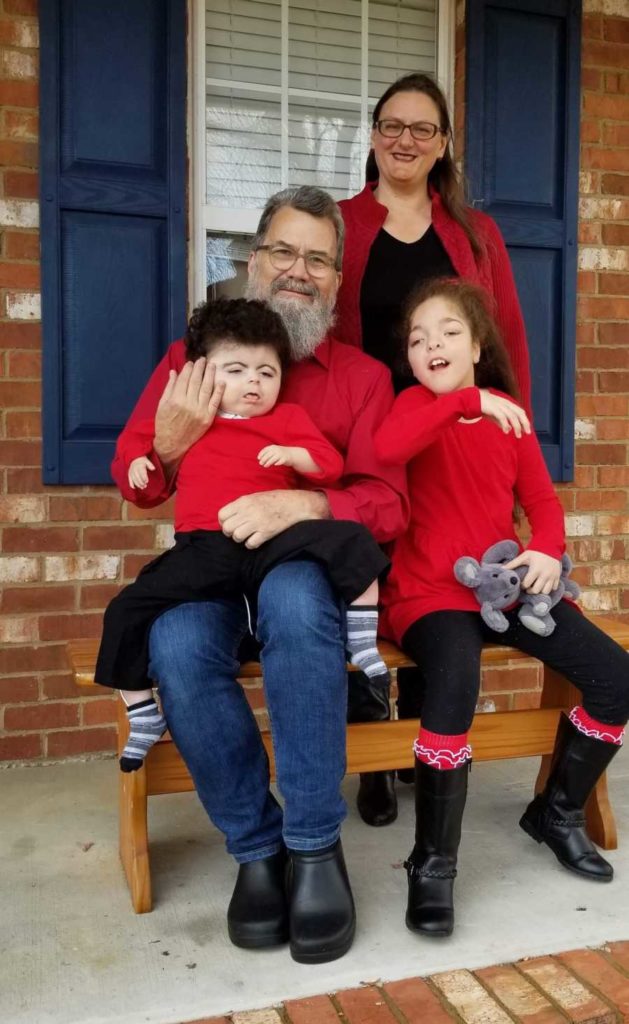 And I love it! We will never be empty nesters. We will always have a sweet someone who depends on us for everything. We will always be the receivers of hugs and kisses from these sweet forever babies. We could not be happier! 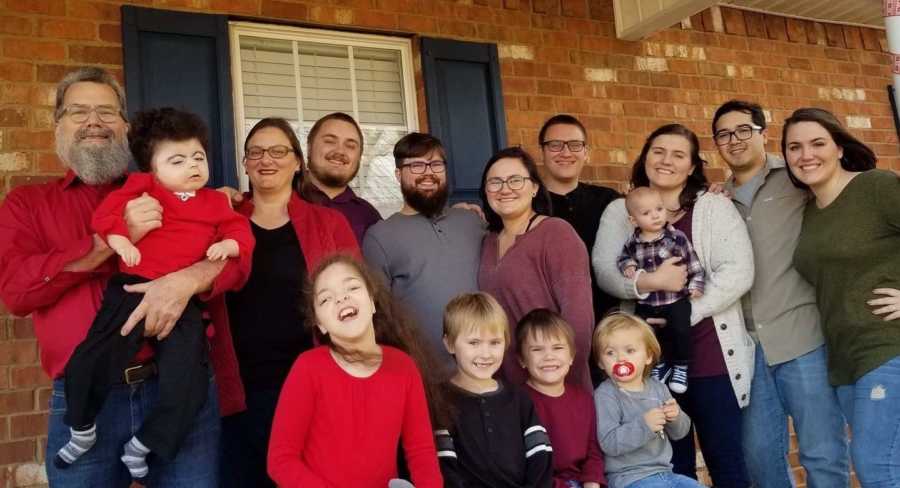 We appreciate the smallest of accomplishments. We don’t stress the small stuff. God has blessed us greatly!”