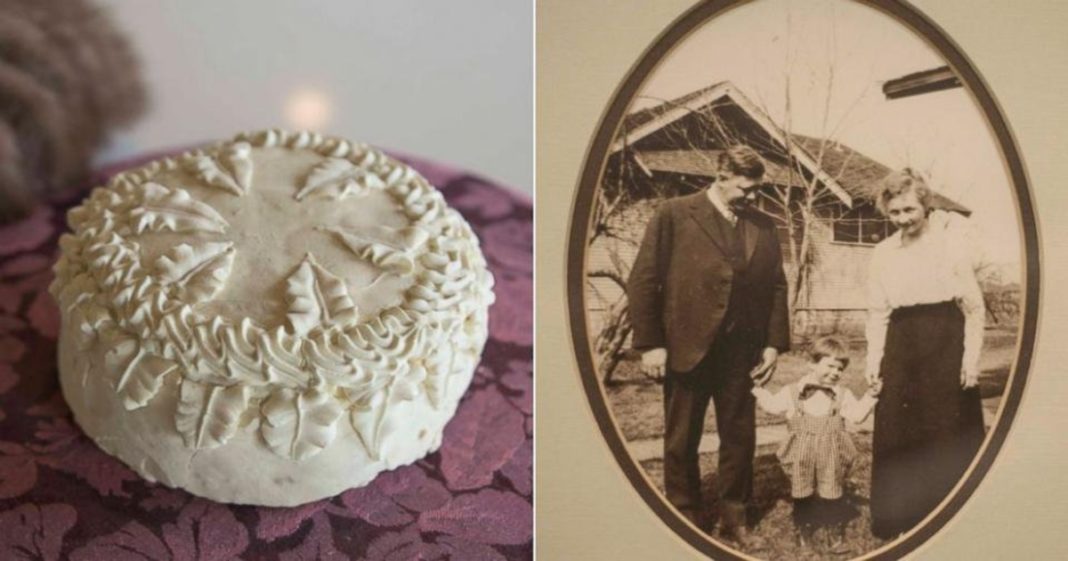 But one couple, Harvey and Inez Warninger, who were married in 1915 decided to keep one item and pass it down to their children. Remarkably, this wedding memento remained intact even after a century and two world wars.

After their march wedding, Harvey and his wife decided to continue this fun tradition of saving the top tear of their wedding cake. Unfortunately, they wouldn’t get to enjoy it later. Ronald, their grandson, remembers seeing the cake in his parent’s freezer. He hadn’t spotted it since the 1950’s. He was warned not to touch it, but nothing more was mentioned about it.

As the 100th anniversary of his grandparent’s wedding approached, Ronald’s sister called him. She asked if he knew where the cake could be found. Ronald searched his basement for it, but he didn’t locate the cake. He and his sister figured it had just gotten misplaced.

Then on one lucky day, while cleaning his garage, Ronald found a hat box. He knew what it contained even before he opened it. The top tear of the cake was perfectly preserved inside with a poem from a friend of his grandmother’s tucked alongside.

It reads: “Remember me when far away, And only half awake, Remember me on your wedding day, And  send me a slice of wedding cake.”

I don’t know if she would want a slice of this wedding cake now,  though! It was intact, but petrified and hollowed out. The white icing was perfectly preserved. It: “sounds like porcelain when you tap it with your fingernail.”

Ronald couldn’t believe it lasted so long and was in such pristine condition. Though it’s inedible, Ronald and his sister were happy to find it so close to their grandparent’s milestone anniversary. The family intends to keep the cake as a family heirloom.

He said, “I’m just glad it reappeared. I felt a little responsible for it. It is just the top of a wedding cake, but how many people have those all these years later? It’s just like a time capsule. I hope to pass it along to one of my kids, and maybe they’ll keep it for another 100  years.” Ronald’s daughter plans to take it eventually. Until then he will keep the cake safely locked away in storage.