Heart-Pounding Moment Strangers Pull 87-Yr-Old, Her Son And Dog To Safety After Truck Plunges Into Water 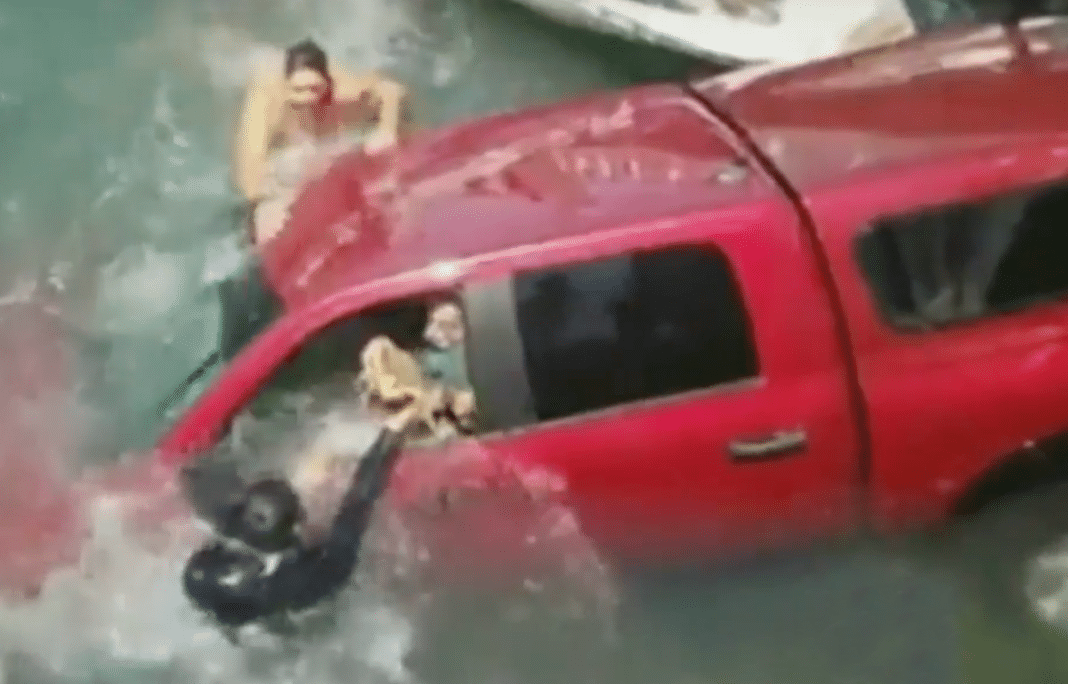 Good Samaritans came rushing to the aid of 87-year-old Mary Watkins, her 67-year-old son, Larry, and their 4-year-old pet chihuahua when their truck unexpectedly lunged forward, crashing through a railing and falling into the waters of a busy boat marina in Long Beach.

The car went from the parking lot to the water below in seconds. The occupants were extremely lucky that the vehicle remained floating and that the rescuers were able to open the unlocked doors.

LBFD Lifeguard units responded to reports of a submerged vehicle just after 1pm today. LIfeguard and vessel assist personnel arrived and made water entry and extricated an elderly couple from the vehicle. Couple was treated on scene and released. Accident under investigation. pic.twitter.com/OaSU2kZ1mV

It was all captured on security video (see below).

One of the men who dove in to help is a former lifeguard and towboat operator, Mike Del Grande. He helped rescue Mary and free the Chihuahua’s leash.

Jeff Jones took video of what happened after he ran to a nearby lifeguard station to get help. Soon fire trucks, the marina patrol, as well as the lifeguards were on the hectic scene.

Jeff Perez, a bystander, worked with the lifeguard to rescue Mary, lifting her out of the truck. 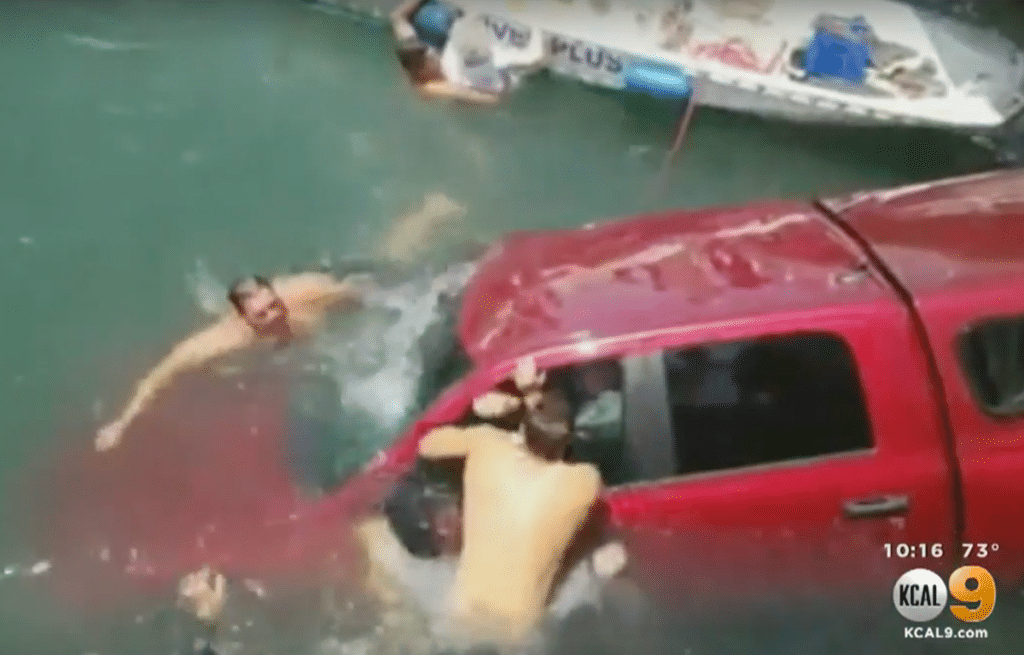 The rescuers jump into action to help

“No sooner did I hop in the water and the lifeguard captain was handing over the older lady to me,” he told CBS Los Angeles.

He downplayed his heroic actions, saying he thought others would have responded the same way.

“I just hope that people would do the right thing. That’s what we’re all here for, to be here for one another and for support,” said Jeff Perez. 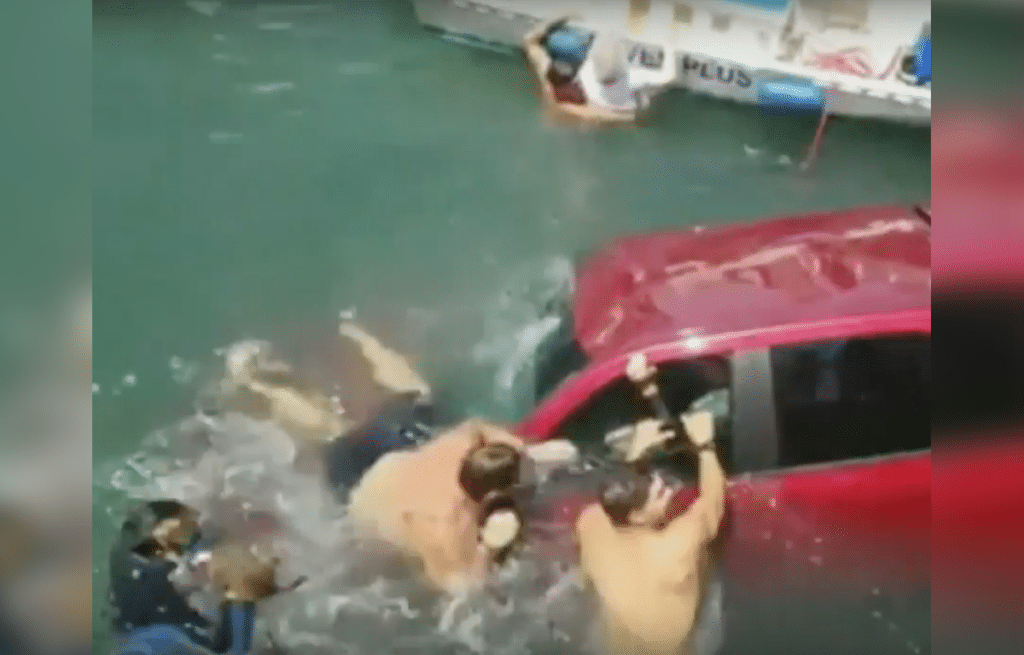 Mary was reportedly strangely calm during the rescue.

“She was surprisingly calm for the situation. I thought it was actually kind of funny to be in the midst of all the craziness that she was more concerned about her hair getting wet and her lipstick and thankfully, we were able to keep that dry for her,” recalled Perez.

Mary said she had a feeling she knew what would happen.

“I don’t want to sound philosophical, but you know what’s going to happen while it’s happening,” Watkins, of West Covina, told the newspaper. “I didn’t want to make any muss or fuss about it.”

She gave a big thank you to her rescuers.

“The two guys came through the back window and shoved me from behind,” she recalled. “I say thank you from the bottom of my heart.” 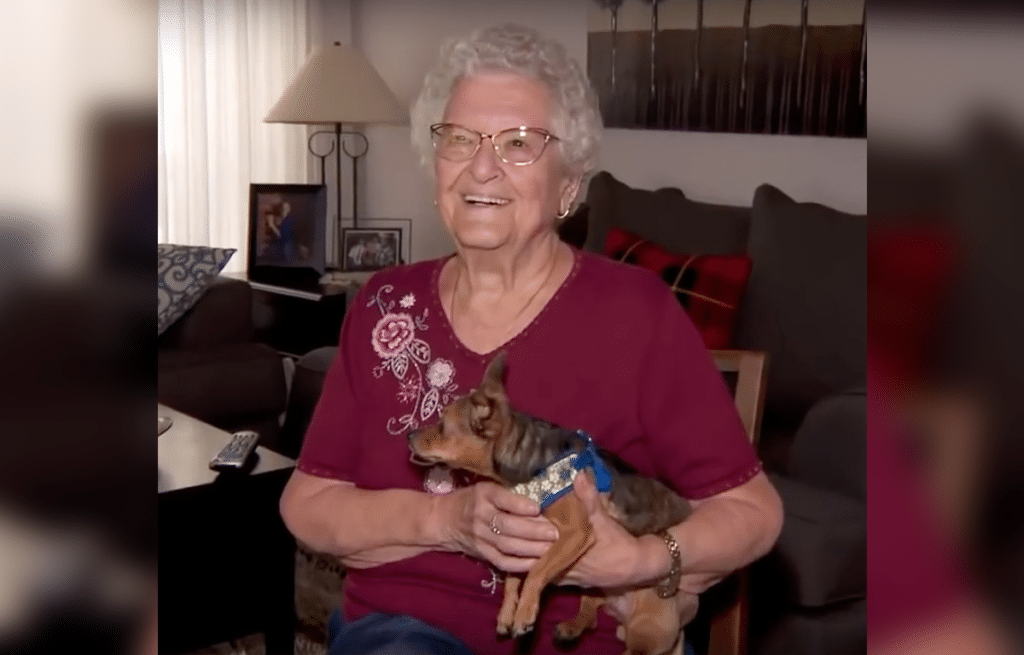 Mary Watkins and her chihuahua

Amazingly, there were no injuries thanks to the quick thinking of the first responders and Good Samaritans.