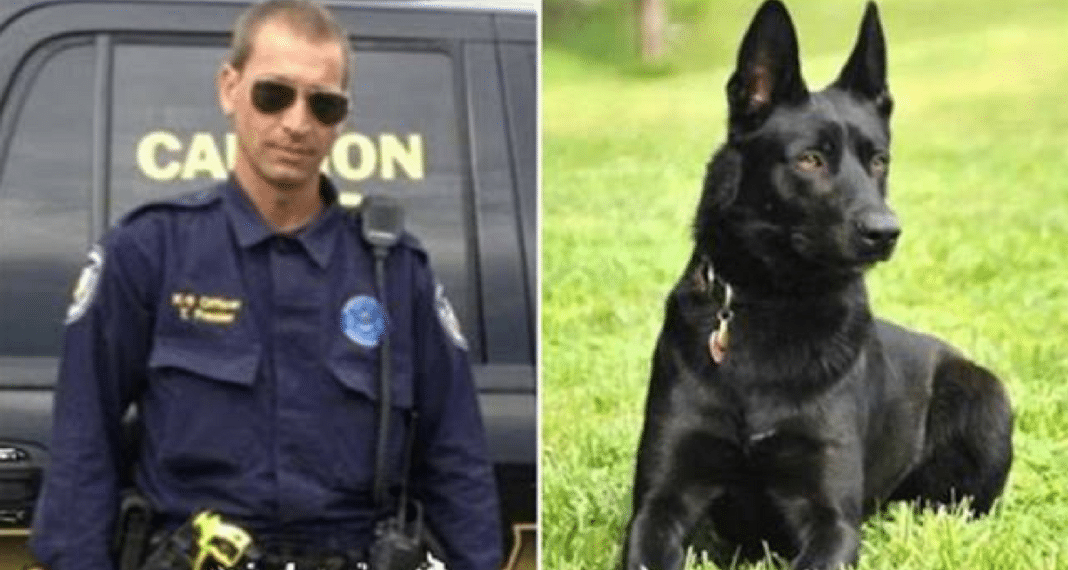 Deputy Todd Frazier works for the Long Beach, Mississippi Police department. While on patrol one day, he came across a man who appeared to be unconscious behind the wheel. While at the car, the deputy became distracted by two other men who approached him.

It was a trap a local gang set for him. The three gang members dragged the lone deputy into the woods while beating him and threatening to kill him.

“They told him they were going to slit his throat, and they were dragging him toward the woods,” Chief Deputy Don Bass said.

Frazier had a device on his belt that allowed him to open the compartment where his canine companion, Lucas sat at attention.

The dog burst from the car and into the woods to save his master’s life. “He knew. I could hear him coming. I couldn’t see anything because the blood was all in my eyes,  but I could hear him coming, growling and making these sounds… he sounded like a wolf,” Frazier said. “I thought, ‘Now he’s gonna get you.’”

Lucas attacked the men. they ran off. “We don’t know how many he got; we just know he had blood all over him,” Sheriff Ricky Adam said of the heroic dog’s actions.

“I had three people on me, and I’m not a very big man, and they basically whipped my butt,” Frazier said recalling the incident. “And luckily, thank God, I had Lucas here, and I had a button on my belt that I wear, and when I hit the button Lucas jumped out of the car and attacked all three of them and they ran away. That’s why he’s my hero.”

The incident was a near miss according to Bass. The men definitely intended on killing Frazier. Unfortunately, man and dog weren’t left unscathed. Lucas tore a ligament and lost a few teeth while protecting his master, but has since received the appropriate veterinary care. He’s since made a full recovery. Frazier too is doing fine. He was taken to a local hospital where doctors tended his minor injuries. He was then released.

For his bravery, Lucas was awarded the “Hero of the Year” award.

In a statement, the Chief Deputy said the attack was the work of a local gang:

“We’ve been stressing this for months and months now. It’s no different from last week. We get a  BOLO (be-on-the-lookout) from the state alerting us that the Black Gangster Disciples have put out an SOS, or Shoot on Sight, for police officers.

“It hits us hard; it brings you to your knees. We’re not a large agency, and all these guys have families. The main thing for anybody is to go home safe. We want you to go home at night. But it could happen to any one of them. The threat is here and the possibility is real.”

Thanks to Lucas, the thugs were stopped and scared away. What a good boy!