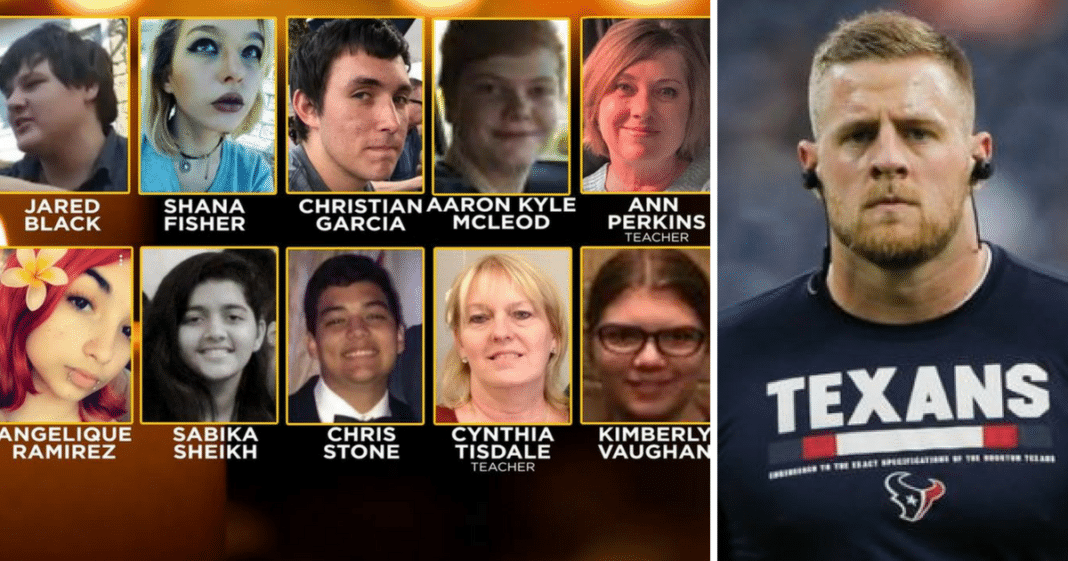 J.J. Watt was drafted by the Houston Texans in 2011; he’s their defensive end. The man from Wisconsin has taken Texas and its people into his heart.

When the floods brought on by Hurricane Harvey devastated Houston, he started a fundraiser that raised over $37 million. NFL teams, athletes and regular folks donated what they could to help out total strangers.

And now with the recent and senseless violence at a high school in Santa Fe, Texas, which saw ten lives lost, Watt’s stepped up to the plate once again. The team has confirmed he’s going to pay for all ten funerals.

Watt was named the NFL’s 2017 Walter Payton Man of the Year. This is the league’s highest honor for community service.

“This award is about the inherent good that lies within humanity,”  Watt said in February when he accepted the award. “It’s about the city of Houston and its ability to overcome adversity at a time when it all seemed lost. It is about the hundreds of thousands of people from all over the country and all over the world who donated to a city they may have never been to, to people that they may never meet. But they donated simply because they saw their fellow humans going through a difficult time and they wanted to help out.”

JJ Watt steps up again. Not only is he paying for all the funerals of the Santa Fe shooting victims, he visited the hospital to spend time with the survivors.

Talk show host Ellen DeGeneres thanked Watt for his incredible generosity. We have to agree. It’s great to see athletes with big hearts help those in their communities. Though watt’s goodness can’t bring those eight students and two teachers back. Hopefully, his actions will lighten their burdens if just a small bit.