Football Coach Suddenly Gets Out Of Car On Way Home, Then Wife Sees Him Saving Stranger’s Life 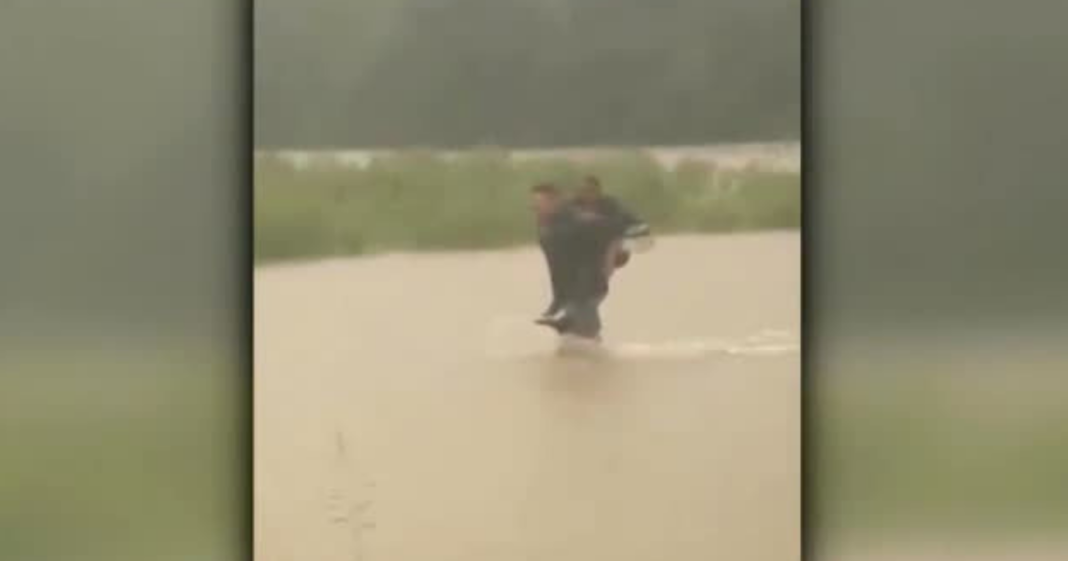 There were dozens of rescues as torrential rains pounded North Texas in September. But the actions of one high school football coach stand out.

On a Saturday evening, Eden Russom’s car stalled in a ditch after a severe storm. Rising floodwaters began pouring into the vehicle. Eden was trapped and terrified for her life.

Danny DeArman has been the head football coach at Arlington’s James Bowie High School for the past six years. He has tried to instill core values on his players.

“We live by family, integrity, selfless and toughness.”

“I think our world would be in a much different place if everyone had a servant attitude and we quit worrying about the negativity,” he said.

Danny embodied the very qualities he teaches on a Saturday night when he and his wife, Sarah, were heading home. They drove by vehicles that had been overtaken by flood waters on a service road. “[Sarah] said, ‘Oh my gosh, they’re stalled out!’ So I hit the brakes,” revealed Danny.

Right away, Danny stopped his vehicle to make sure the other drivers were OK. That’s when he saw Eden waving him down and in desperate need. “When I saw her put her hand on the window it was over,” he said.

He immediately jumped out of his car as his instincts took over while his wife called 911.

For several frightening moments, Danny was pulled under the water and disappeared from Sarah’s view. His body was getting swept away by the currents, but he refused to give up.

Danny walked toward the stranded woman without shoes on.

They had been swept away.

With the help of another Good Samaritan, CJ Mashburn, Danny risked his own life to save a stranger’s. The two men shattered Eden’s window and pulled her out of her car.

“I do remember carrying her and the whole time was constantly, ‘I’m sorry. I’m sorry. God bless you.’ I said, ‘Ma’am I can’t even feel you on my back,'” Danny said.

Sarah filmed the tear-jerking moment her husband hoisted Eden onto his back and trudged through the floodwaters to safety. The video clip was posted to Twitter by a friend, and it went massively viral.

He placed the woman with paramedics on higher ground and left before he got her name, and before she even got the chance to thank him.

“I don’t think I did anything anyone else wouldn’t have done,” Danny said.

Eden soon learned her rescuer’s identity and where he worked. She had planned to thank him in person the following Monday. However, due to the viral video, media outlets began contacting her before she had the chance.

That following Friday, Danny received an email about an impromptu school assembly. While waiting for a parent to arrive, he walked outside and realized the whole thing was really just a ploy set up by students and staff.  There was a very special person who was secretly waiting to reunite with him.

Eden was finally able to say the thank-you she had been waiting for since the day Danny pulled her from the flooded vehicle. What a wonderful way to honor this hero! It was well-deserved.