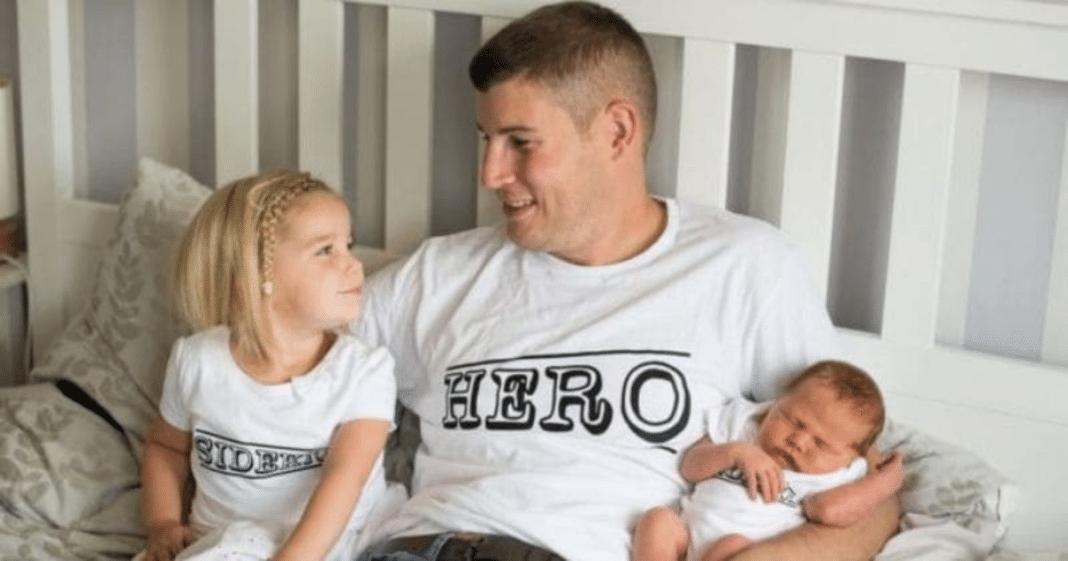 Sometimes, events in our lives seem to have a timing that is just too synchronized to be coincidental. Although tragic things happen, they are sometimes timed as if it’s a reminder of our higher purpose and that this life and its many difficult struggles will not be in vain.

For Brett and Nicola Kinloch, their journey appeared to be just getting started when tragedy struck. Brett, a fit PE teacher, was 22-years old when he met the love of his life. Nicola and her future husband met on the job in 2010.

The couple fell in love and had a daughter, Freya. Then shortly after her birth, Brett got the devastating news that he had a grade four glioblastoma brain tumor. Doctors gave him just 12 months to live, but he refused to give up.

Brett and Nicola faced each day with hope and optimism, refusing to let cancer defeat them or take away the joy from their time together. He would go on to see the birth of another daughter, Ella, and then learned that Nicola was expecting another blessing. Then, just before Christmas last year, the couple got another setback; Brett’s tumor came back.

This time, there was no treatment since it had grown in an inoperable area of his brain. His condition was deteriorating quickly after all of his valiant efforts to beat the odds.

Brett reassured his family that no matter what:

“Everything is going to be okay – things will be different, but they will be okay.” 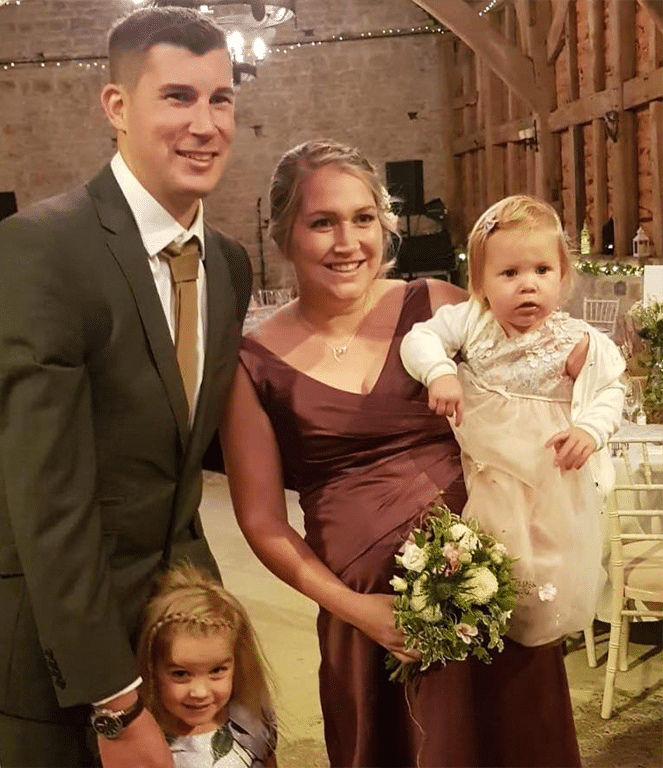 Instead of pitying himself, Brett continued to face each day with courage, working right up until the end to help provide for his family. When he could no longer drive, he got a bus pass and enjoyed trips with his kids.

Finally, the determined dad’s health required that he go back to the hospital, but at the same time, Nicola went into labor. Their newborn Ariya was on the way. Doctors, nurses, and paramedics came together to beat the clock and orchestrate a first and final meeting between the infant and her father on February 11.

“There was no doubt about it, he waited for her,” said Nicola. 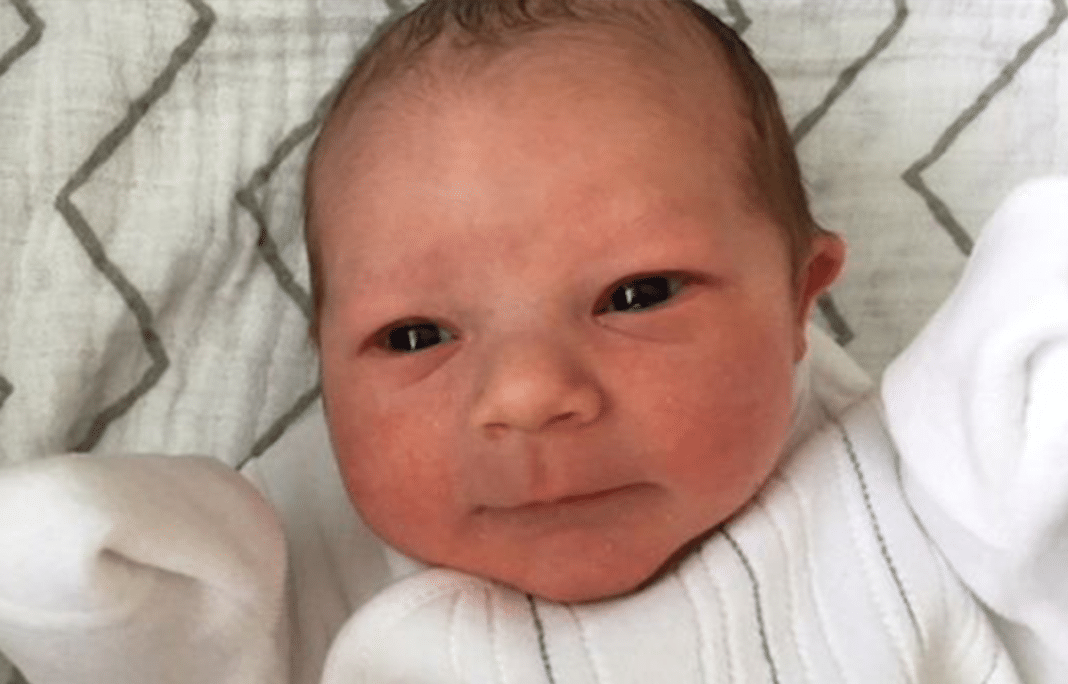 Even though the last minutes were hectic, she somehow knew that it would all work out just fine.

“I just wanted to get there-there was no question we weren’t going to make it,” said Mrs. Kinloch.

Although she said it was “heartbreaking” not to have a family photo with all of the kids and their father, she’s glad the older girls will have memories and has pictures of Brett and Ariya together.

“I put her by his face and laid her by his arm and got his hand and stroked her hair.”

“I have got some pictures of her with her dad.”

While family and friends helped take care of the couple’s other children, Nicola, her mother Jill, and the baby hit the motorway just 50 minutes after giving birth. They had to make it to a different hospital where dad was beginning to fade fast.

With the help of all involved, Nicola made it to his side where she rested her baby on her father’s skin. He survived just three hours more before he passed away at only 31-years old. 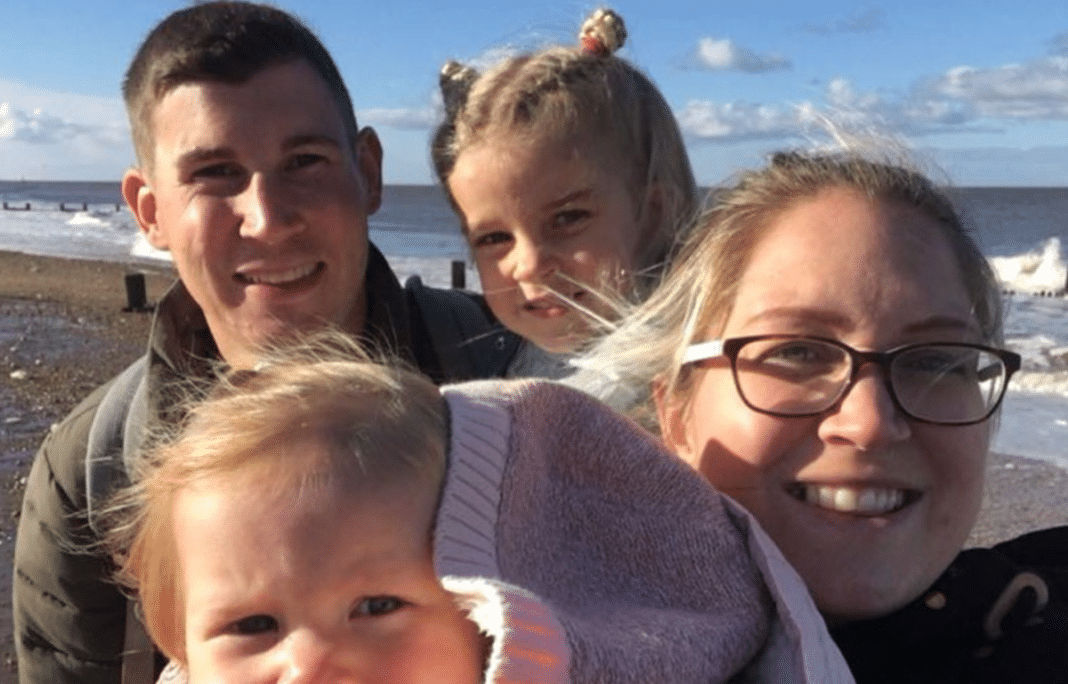 “I take a lot of comfort in the fact he did meet her. I laid her on top of him, and she had a cuddle.

“He could hear what was going on and he knew we were there, I’ll always be grateful for that.”

She remembers that right up until the end, he counted his blessings for each day with his family.

“He loved life, and he never made excuses, never let [his illness] stop him living.”

The mother of three will always have the memory of introducing Brett’s child to him in this life. Now, his older daughters grieve the loss of their dad, whom Freya called “superhero handsome prince.”

On a GoFundMe page created to help the family, a family member said:

“People like the Kinloch’s are of a rare kind. The kind of people that go out of their way to ensure everyone else is looked after and cared for and have the biggest hearts of gold.”

“On Monday 11th February the Kinloch’s welcomed their beautiful baby girl into the world at 5:07 a.m. Their beautiful third daughter.”

“Under the most devastating circumstances sadly she took the place of their absolute hero, her Daddy, at 8:25 a.m.”

“He will forever be their hero.”

Nicola acknowledged the overwhelming support from family, friends, the community, as well as all the medical staff who came together to make sure that Brett Kinloch could meet his baby daughter.

“I can never thank the [National Health Service] enough – the call-out doctor called Tim who kept Brett alive, the paramedics that took him over there… there were nurses from all areas of the hospital that just wanted to do everything they could. There was no-one at the NHS who didn’t go above and beyond to help us.”