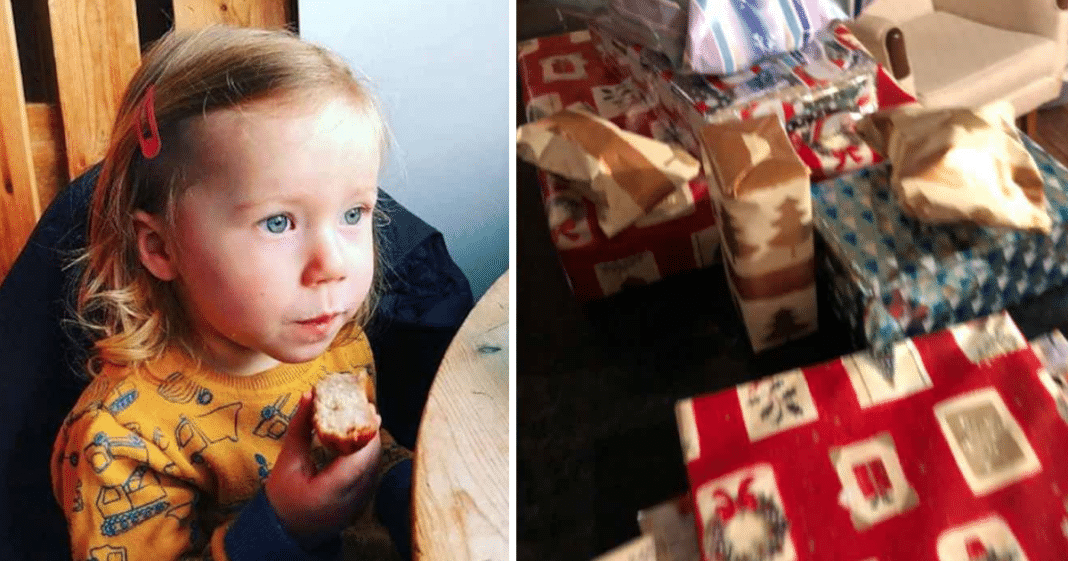 As we hear countless stories about heart-warming Christmas gifts and gestures, one incident in Cymru, Wales stands out.

Owen Williams had a wonderful elderly neighbor named Ken who recently passed away. Owen and his family were apparently exceptionally good neighbors to the elderly gentleman and Ken made sure that his own daughters knew that.

Ken was a former salvage diver, seaman, carpenter, and baker. He lived an active, adventurous life. The first time Owen met him, Ken was bouncing a 20-foot ladder across the face of his house, and Ken was on top. He was 83 years old at the time. Wow! 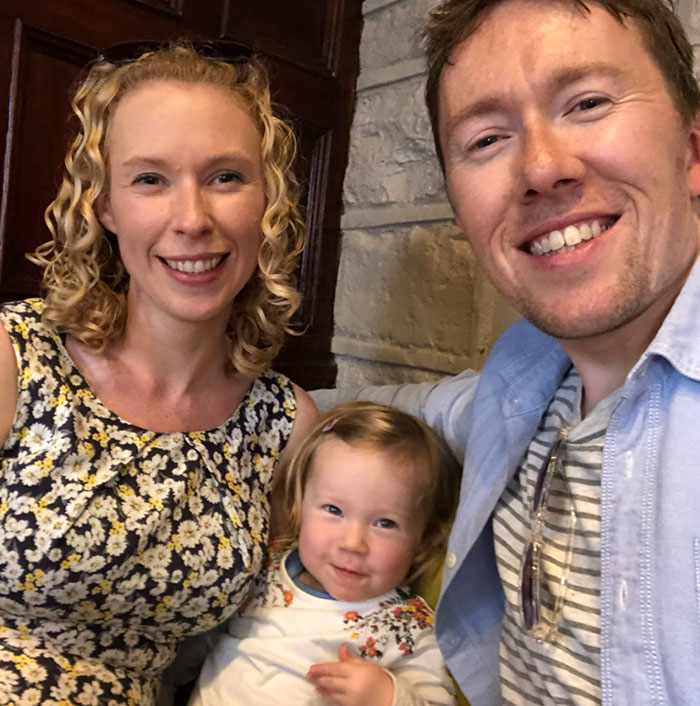 He always promised Owen, Owen’s wife, and Owen’s little girl that he’d live to be 100 years old. When it became apparent to Ken that he wouldn’t be able to keep that promise, he made plans to always be a part of this young family’s Christmas tradition. So imagine Owen’s surprise when Ken’s daughter came to visit with a card. 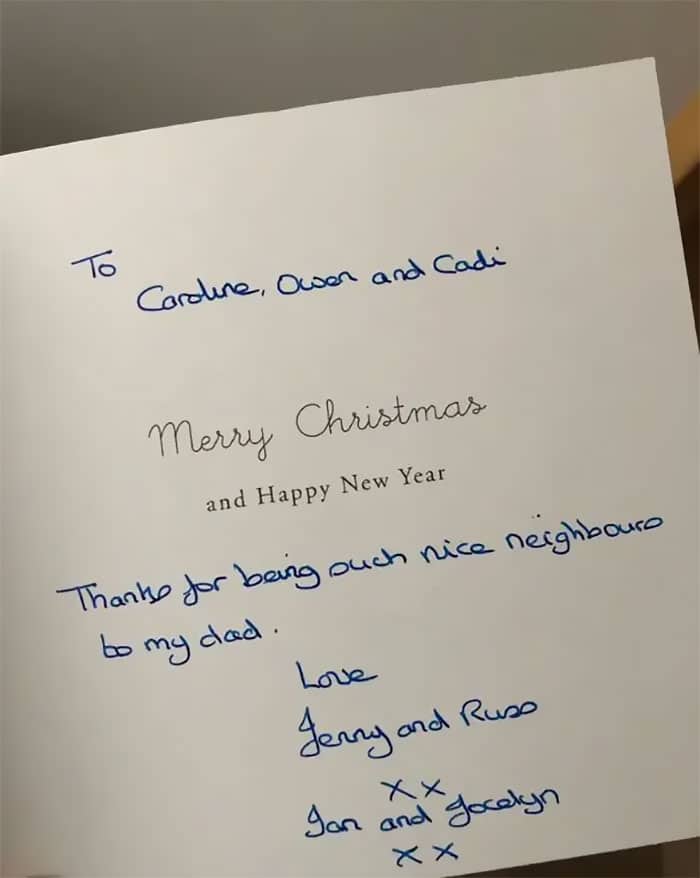 Owen tells the story in a series of tweets.

Our elderly neighbour passed away recently. His daughter popped round a few moments ago clutching a large plastic sack. In the sack were all the Christmas presents he’d bought for *our* daughter for the next thirteen years. ? pic.twitter.com/6CjiZ99Cor 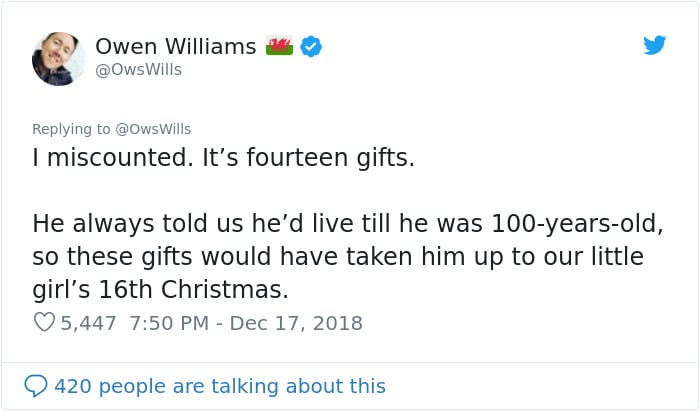 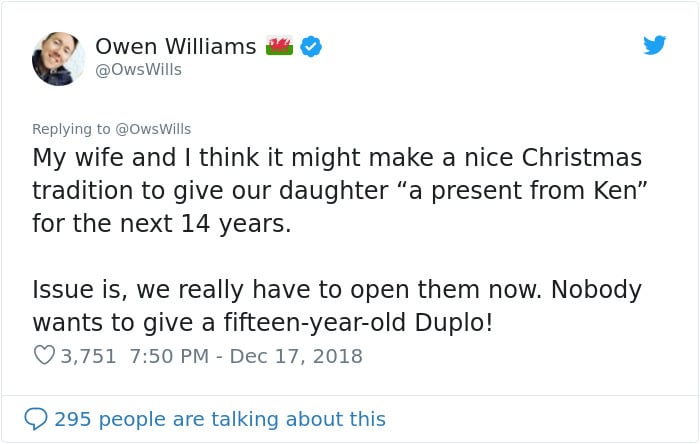 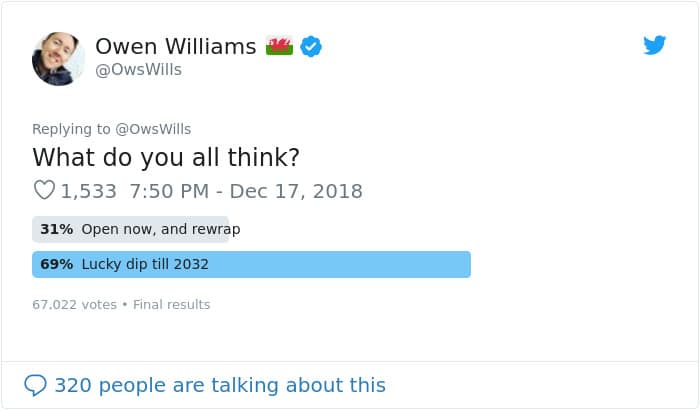 Owen did an interview with Bored Panda, in which he explained that although he felt compelled to open them for his little girl, it wasn’t that difficult to not do that.

“They weren’t for me, after all. My wife’s curiosity got the better of her with one gift, but now Twitter has spoken, so we’ll abide by the internet’s collective wisdom!”

They opened this gift: 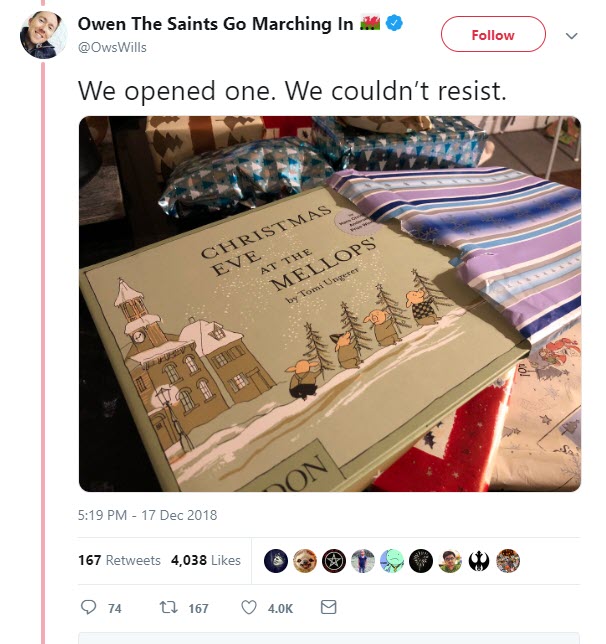 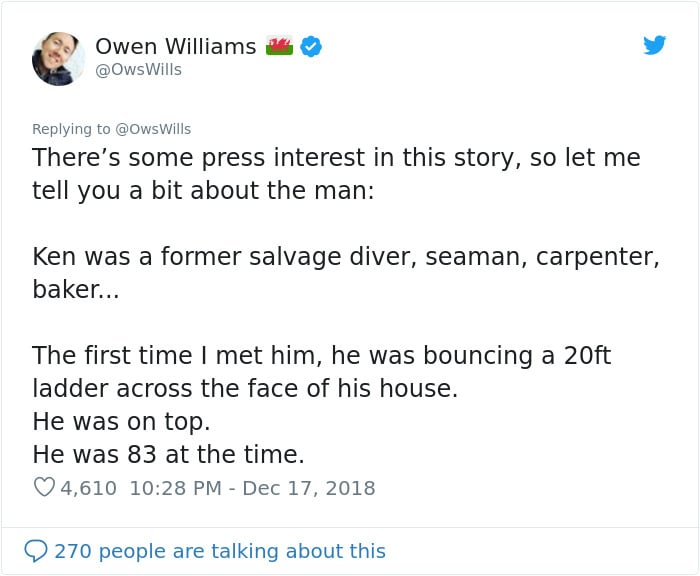 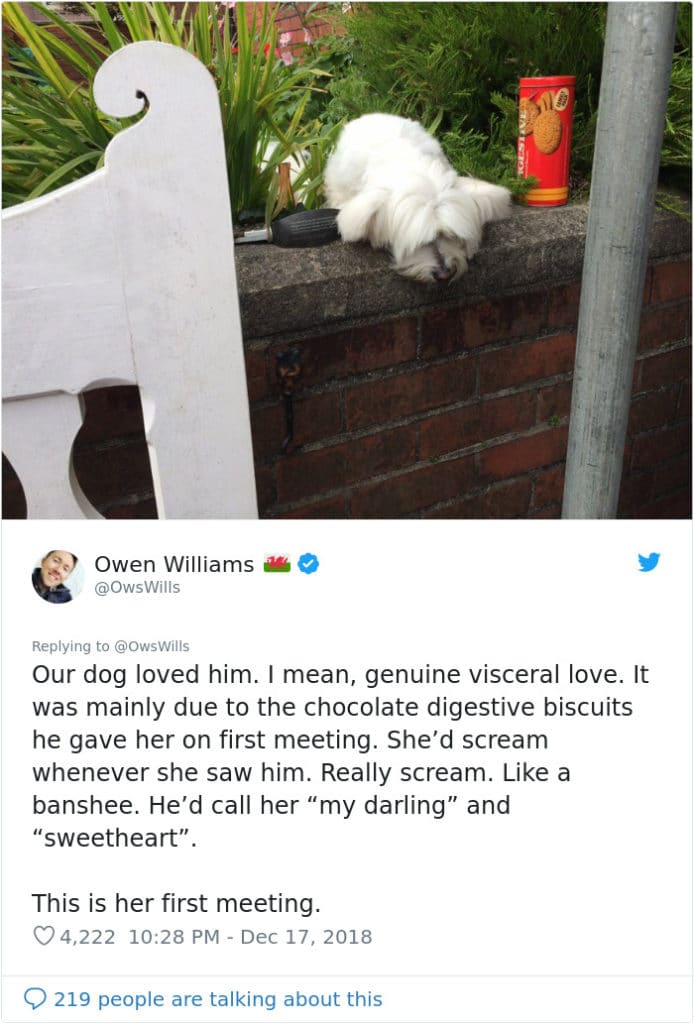 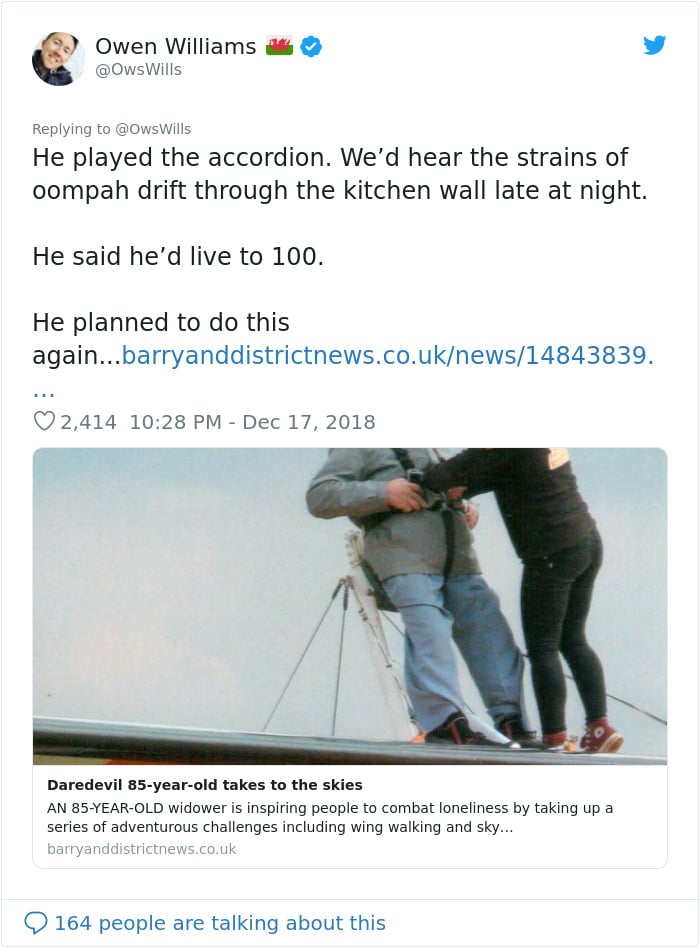 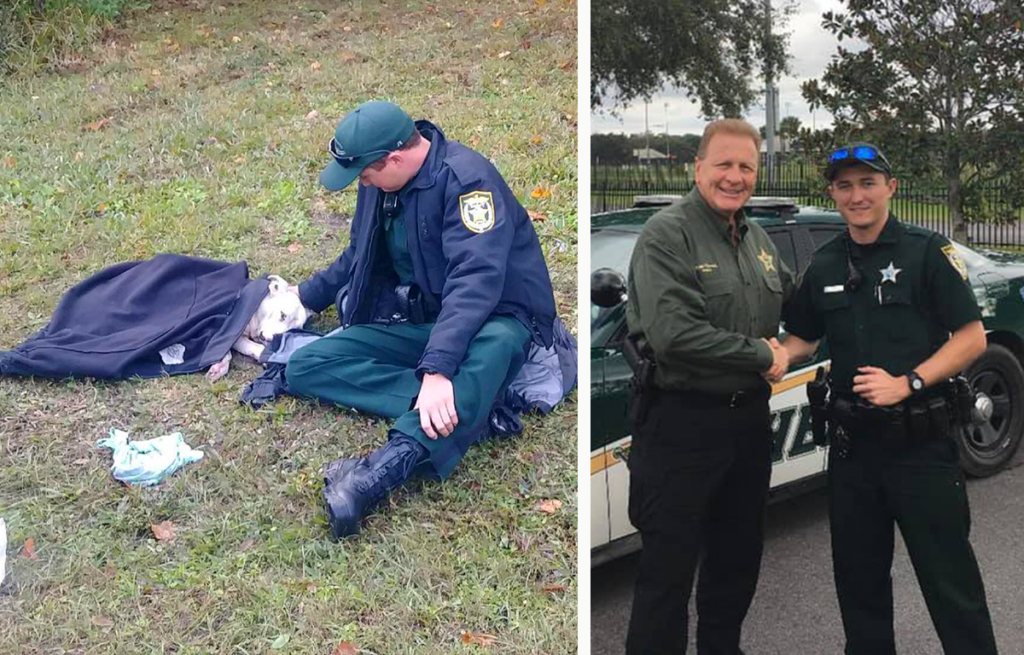 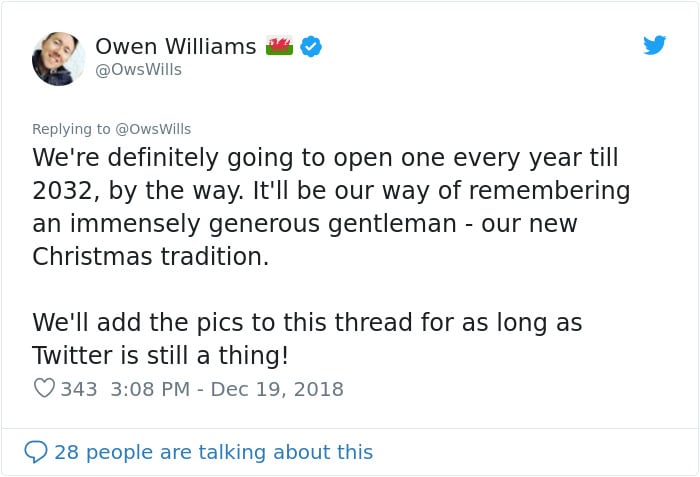 This is such a touching story. In the era of “me,” these kind of gestures really stand out. People all over the globe have vowed to do exactly what Ken did for the little ones in their lives.

What a wonderful life goal, to make yourself a part of a child’s life for years to come.