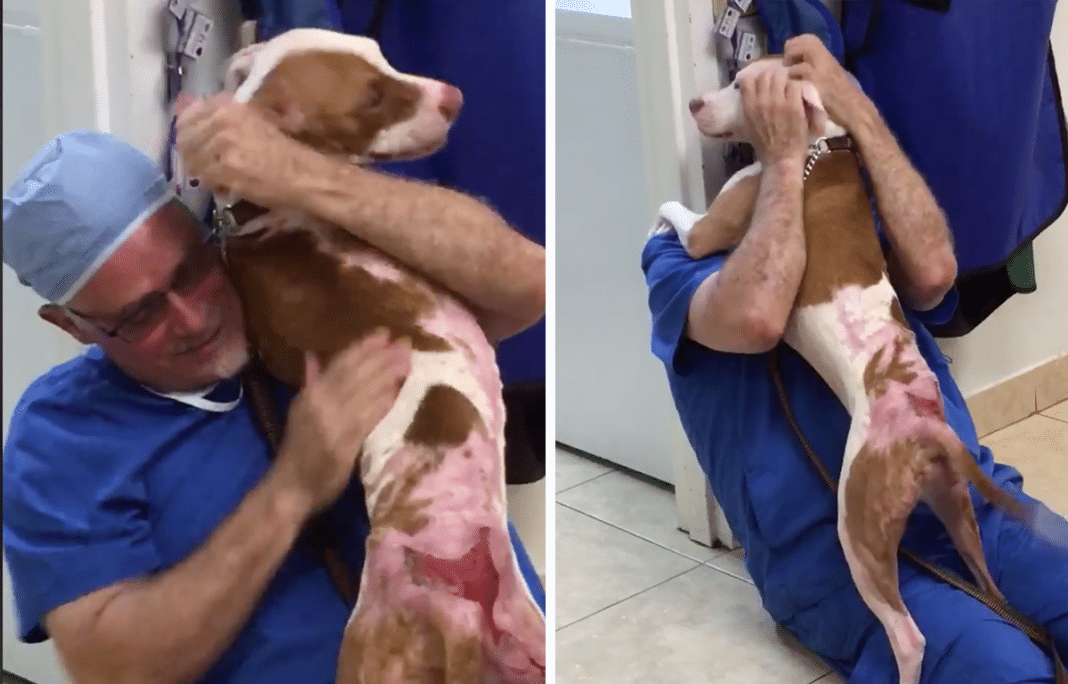 Firefighters arrived on the scene of a fire at a homeless camp in Palm Beach. As they approached the scene, they heard barking and saw a small brown and white dog tied to a tree. The dog had burns over his entire body.

“The little guy was burned up pretty good.” Gordon said.

“Even when we grabbed him, he was very distressed. I was concerned whether he would live.” 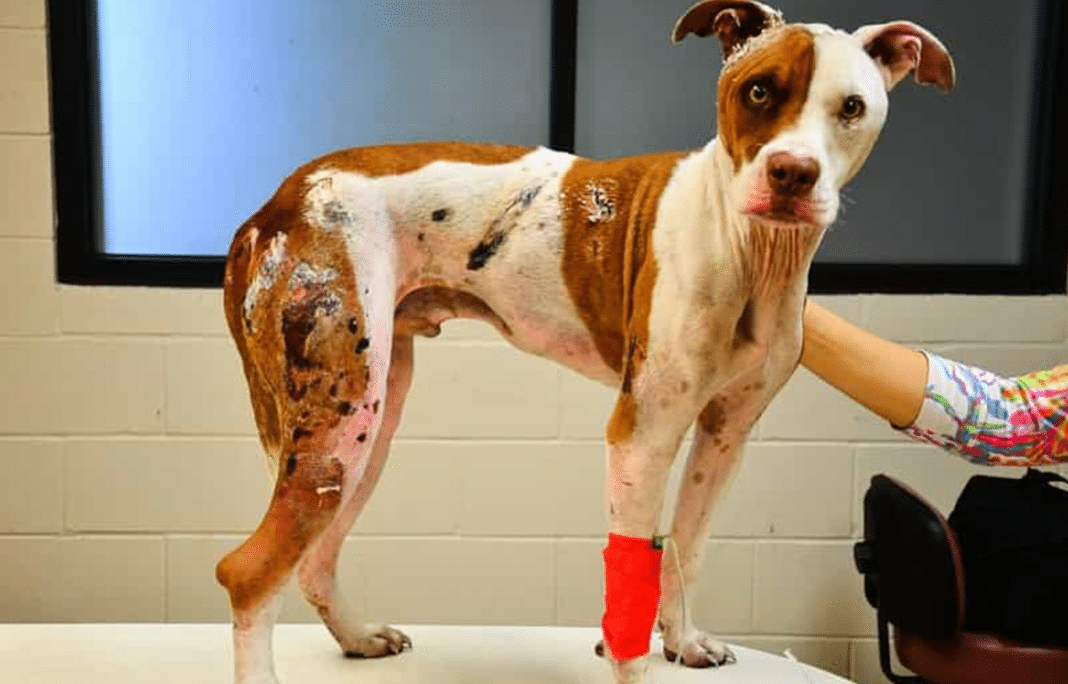 The dog has horrible burns on his torso and hind legs

The firefighters could see he was in agony. They didn’t know if he would survive the horrible injuries.

Firefighter Marcos Orozca approached the 2-year-old dog and cut the chain to free the frightened and suffering pup from the brushfire and kept him safe until animal rescuers could begin their efforts to save him.

Animal Control found burns on the dog’s torso and both hind legs. The injuries were life-threatening, so they took him to Peggy Adams Animal Rescue. There, rescuers determined that he needed specialized care, extensive medical treatment, and rehabilitation. So the dog was off to see the best specialists at Jupiter Pet Emergency & Specialty Center. The experts gave the dog multiple blood transfusions and numerous treatments in a hyperbaric chamber to help reduce swelling and pain.

Jupiter staff said the dog slowly learned to trust the caring rescuers and to begin regularly eating again as he realized he was safe and secure. Dr. Federico Latimer was the primary veterinarian who cared for the dog who was later named Smokey. He formed a close bond with the dog as he showed care and concern in his recovery. 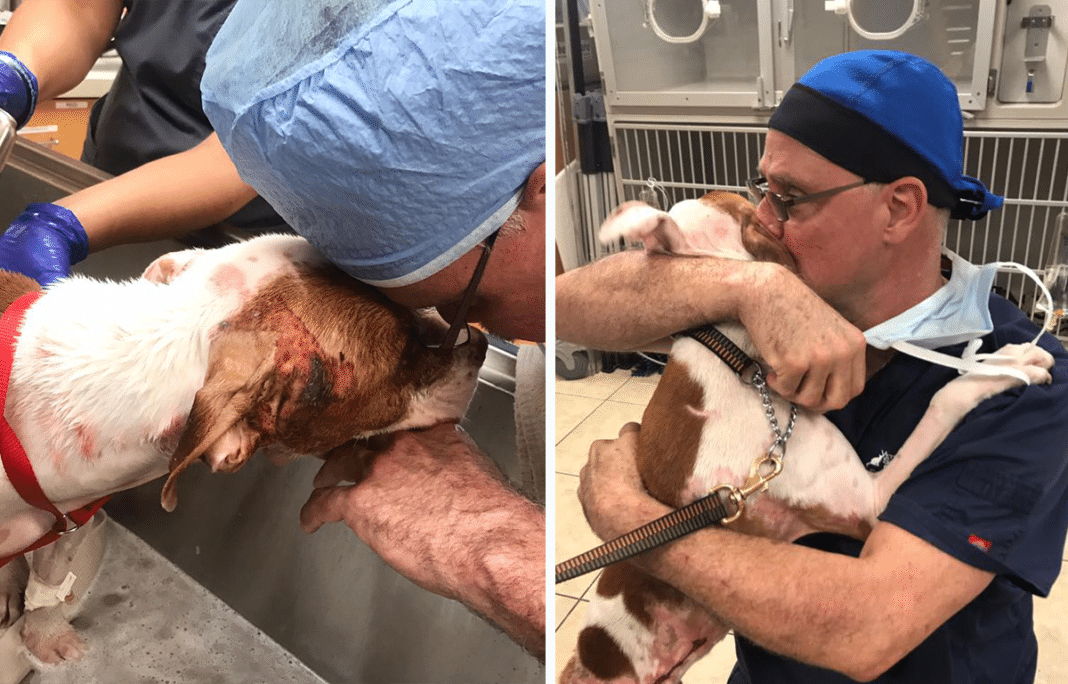 “Eventually, he started to eat again (with the help of his ‘friends,’ aka our nurses).”

“In time, he became less fearful, more trusting, and finally began to realize that he was on the road to recovery!”

After several months, the puppy made a fantastic recovery. Smokey was ready to find a foster family. That’s when Capt. Gregg Gordon and his wife committed to taking him to their home. Gregg said that the dog’s name from previous owners was Bologna, but the family decided that Smokey was a much more fitting name. 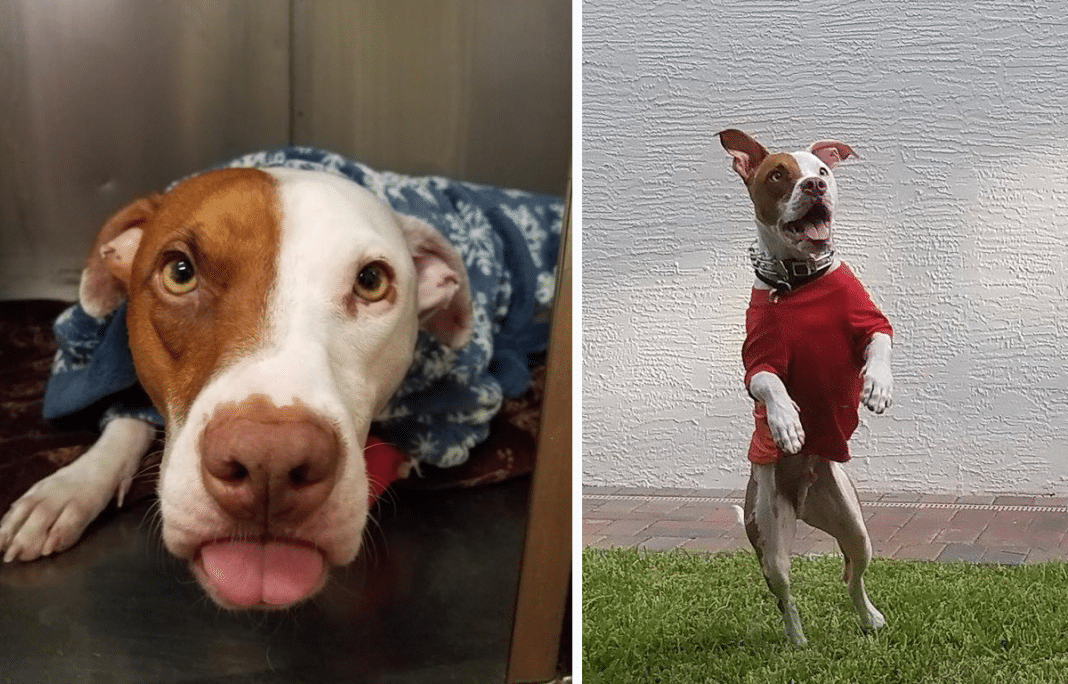 Smokey would start a new life with two Labrador retrievers and another mixed breed dog.

“We’re keeping our fingers crossed that he’s good with other dogs,” Gordon said. 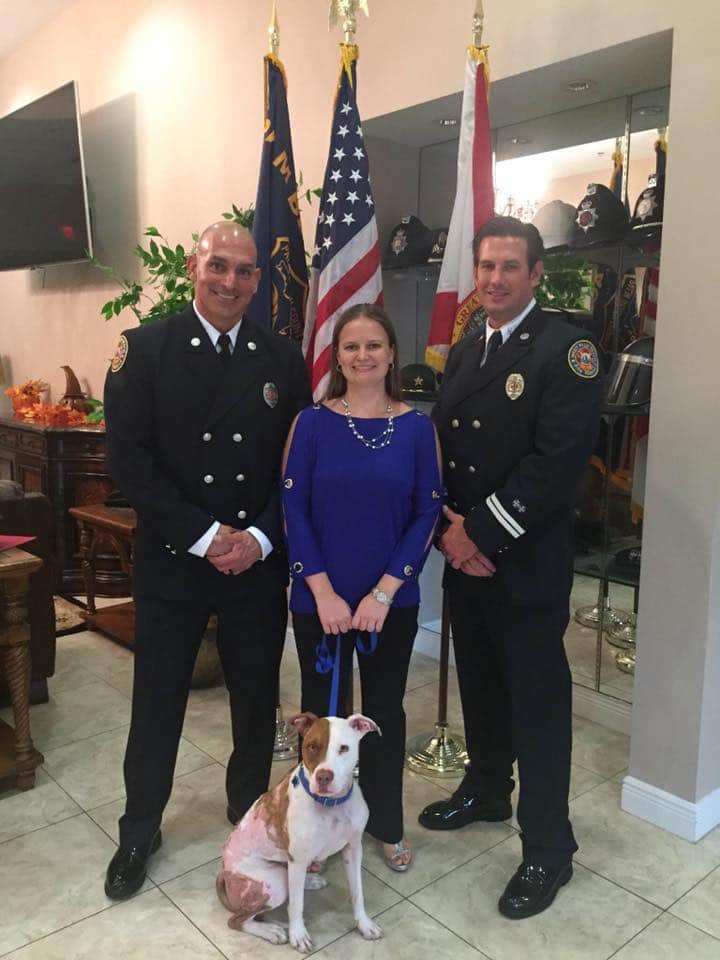 As a firefighter, Gordon had seen many fires at the camps near West Palm Beach. He believed that Smokey was tied to a tree as a guard rather than as a companion.

Smokey continued to improve in his foster home, but one day he returned to visit Dr. Latimer at the clinic for a check-up. Smokey’s reaction to seeing the man who saved him is priceless. (see the video below).

He wiggled around the room, visiting all the vet techs who helped him recover, and then he got a big embrace from Latimer, who got the biggest warmest “hug” from a clearly grateful and joyful Smokey. The cuddle session lasts and lasts as the vet techs laugh and share in the emotional reunion.

“Look who’s BACK!!!!!! SMOKEY! Judging by this reunion, we are pretty sure that Smokey knows how much Dr. Latimer and all of his nurses helped him! ❤?”

Look who's BACK!!!!!! SMOKEY! Judging by this reunion, we are pretty sure that Smokey knows how much Dr. Latimer and all of his nurses helped him! ❤?

Smokey was so beloved and special to the rescuers that a staff member at Jupiter Pet Emergency & Specialty Center decided to adopt him permanently. Smokey got a new name: Fenrir or “Fen” for short. The center posted updates saying that Fenrir was thriving in his loving home and showed Fen sharing another happy reunion with the firefighters who saved him from the fire.

“He loves to play! He is continuing to heal.” 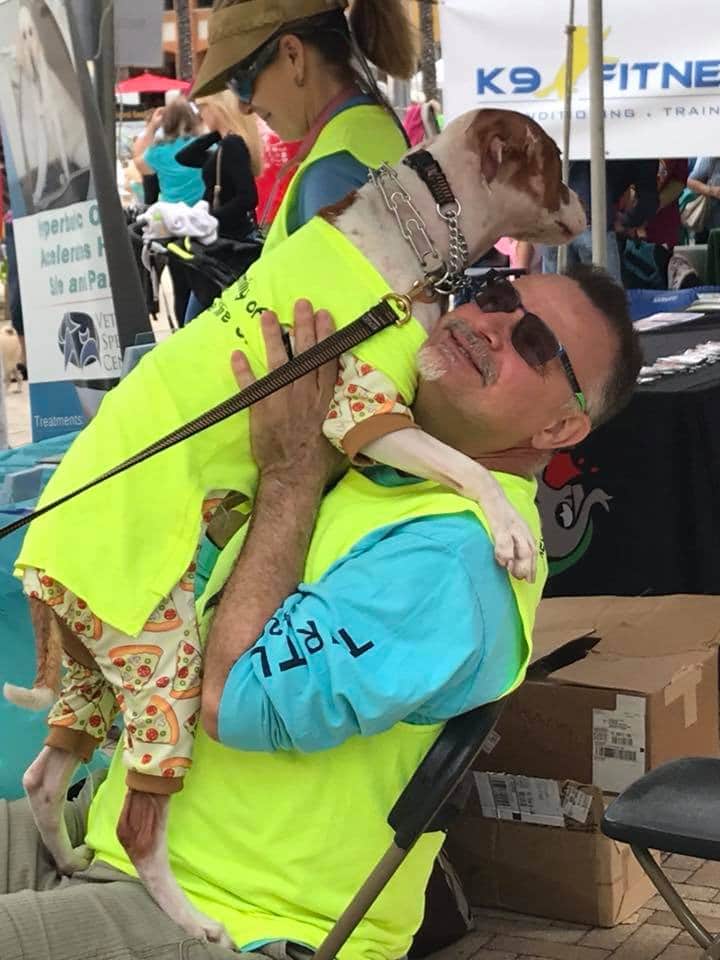 Such an amazing group! Here are the firefighters that saved Fen in March of 2017! Thank you to all!