Dog found tied to pole, covered in accelerant and intentionally set on fire 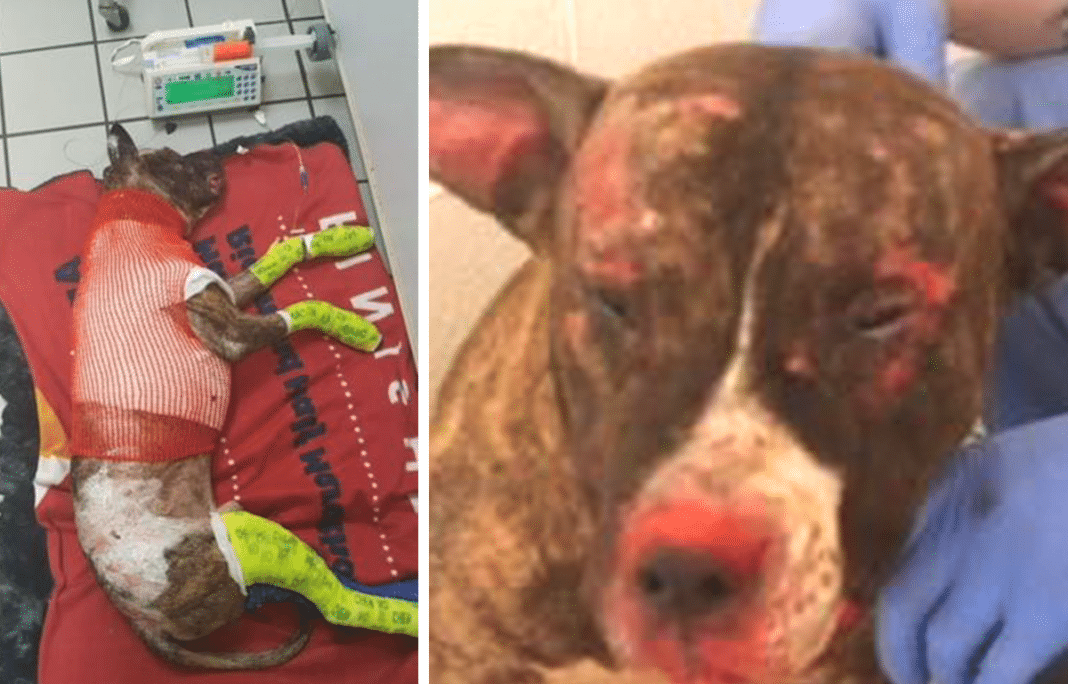 On Sunday evening, a psychopath tied a male brindle pit bull wearing a camo collar to a pole in Abner Clay Park off Clay Street in Richmond, Virginia. They then poured accelerant on him, set the dog on fire, and fled the scene.

The Richmond Animal Care and Control Facebook page described the male perpetrator, who ran away wearing more than one pair of pants. The time was around 7:30 p.m.

“Witnesses saw an adult male suspect wearing multiple layers of pants run from the scene towards Belvidere Street. If you have information about this crime, call Metro Richmond Crime Stoppers at 780-1000 or submit your tip through the 3PTips.”

They emphasize that any information, however small an insignificant it may seem, could help them find who did this to the dog they have named, Tommie.

“We want to find the person responsible for this heinous crime. We named the dog Tommie, and he is currently being treated for burns to over 40% of his body at Virginia Veterinary Centers.”

The evil, senseless act of violence left the staff at RACC rattled.

“I have to say that we don’t get rattled by much at RACC, and have witnessed many ugly cases, but this one makes us want to just sit on the floor and cry.”

Although the dog suffered a vicious attack, the rescuers say he has a sweet disposition. They are hoping to receive enough donations to care for whatever Tommie needs.

Please consider making a donation to our RACC Foundation towards the cost of his vet care … it will be a long and expensive road to recovery for this sweet dog,” RACC said on Facebook.

RACC said that Tommie was still on fire when firefighters arrived on the scene and put out the flames. His injuries are so extensive that they aren’t sure Tommie will make it, and if he does, it will require extensive medical care.

After four hours on Facebook, the post has gone viral, shared over 6,900 times at the time of this writing.

Most of the comments expressed an outpouring of love and support for the rescuers and for Tommie. Other comments took aim at the sick person responsible for such astonishing cruelty.

Already one man has shown interest in adopting Tommie.

“Richmond Animal Care and Control, thank you for ALL you do. I would like to meet him when he has recovered and is ready for visitors. The purpose being that I’d like to adopt him and give him the love he so deserves.”

Another person received almost a thousand likes for this comment, which showed no mercy for the perpetrator.

“I hope the person who did this is reading this …you deserve to be tied to a pole and set on fire yourself…..Only this time no one comes and saves you !!!”

According to NBC 12 News:

We hope they find the sick person who did this to Tommie and that this poor dog survives and fully recovers as soon as possible.