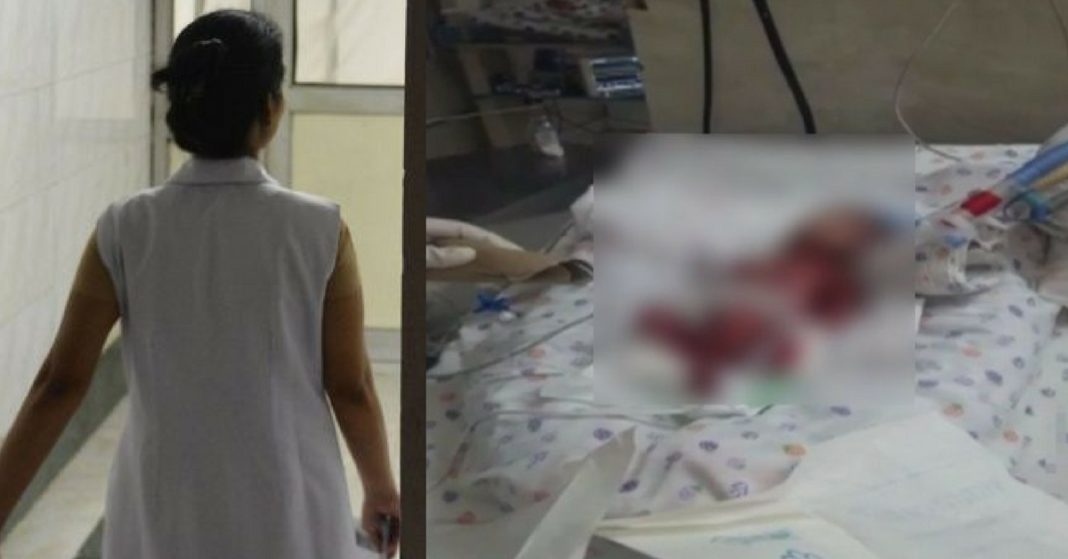 When you’re at the hospital, you trust the doctors are capable and good at what they do. You have faith they know how to do their jobs and will be thorough with their diagnoses and treatments.

Parents, especially, have to put their new babies’ lives in the hands of doctors. Granted, physicians don’t always get it right, but rarely are they negligent in their responsibilities toward their patients or families. When this does happen, it’s devastating to all involved.

A family in New Delhi faced an awful experience where the doctor’s actions were worse than neglectful – they were careless.

The new parents were at a highly-renowned and high-end hospital in India, the Max Hospital of Shalimar Bagh.

When we think of high-end, we think of staff who are excellent at their jobs and services that are beyond impeccable. Unfortunately, this can’t be said for this hospital.

The couple was ready and eager to welcome their twins into the world. Sadly, the girl was stillborn and the little boy wasn’t doing very well.

Doctors said they could help the boy, but only if he underwent an expensive treatment. He would need to be placed on a respirator and remain hospitalized for three months.

The parents couldn’t afford this treatment. They requested their son be returned to them so they could rush him to another hospital where they could pay for his care.

The hospital staff brought the baby back, but that’s when they told the distraught parents the heartbreaking news: their son had also died.

This couple who had come to the hospital with such hope and excitement was now leaving without either of their children.

They prepared their sweet babies for their last rites before they were taken to be cremated, and that’s when something wonderful yet frightening happened.

As they said goodbye, they suddenly felt motion from inside one of the heavy plastic bags. Horrified, they realized one of their babies was still alive!

“Very shocking incident, height of negligence,” said Deependra Pathak, spokesperson for the Delhi Police. “We have started inquiry and investigation, in this case, also consulting legal experts, Delhi Medical Council and taking details of all circumstances, will analyze them& initiate action.”

These poor parents suffered such emotional highs and lows in one day. My heart breaks for them. It’s fabulous their son is alive, but the trauma they went through is unfair and unacceptable.

After noticing their son was still living, the parents rushed him to a different hospital where they were able to stabilize him.

Visual of newborn baby who was declared dead by Max Hospital in Delhi’s Shalimar Bagh found to be alive by family later#maxhospital pic.twitter.com/MpPVOpPrk1

The doctor who provided the misdiagnosis has been sent on leave. Police and experts are looking into what happened to make sure it never happens to anyone else.

What a horrible situation to have to go through. Thankfully, at the end of the day, these parents still have their son. We’re sure he is extra precious to them after this terrible ordeal.

Were you shocked when you realized this baby had almost been killed? So share this!